"It’s not that we are anti-maskers or anti-vaccine, anti this or that, it’s just that literally he has this condition and he can’t physically tolerate to have the mask on." 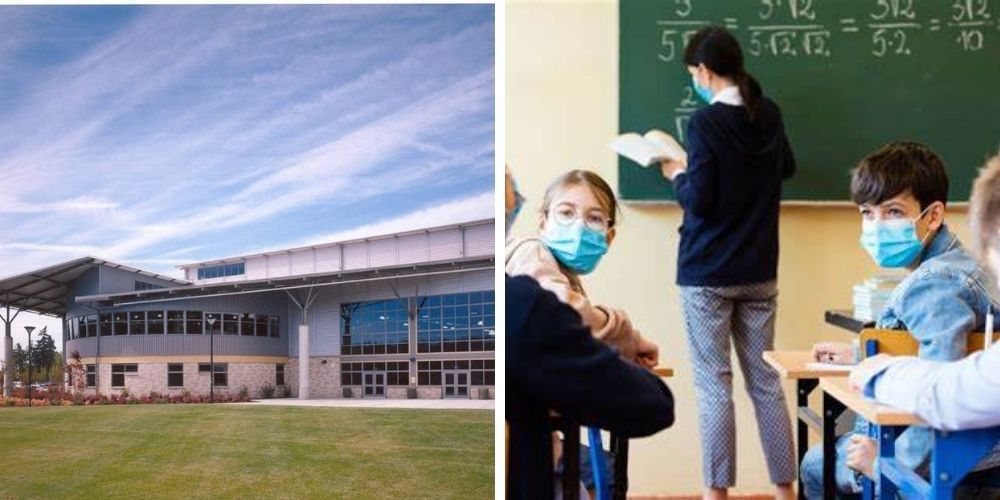 A teen with a rare, progressive, terminal respiratory condition was forced to wear a mask at school, even though school's administrators had previously granted exemptions. After his parents objected, the teen was segregated into classroom alone. All Washington state schools were put under a mask mandate by Democrat Governor Jay Inslee in August.

Allie Salas's son Caleb suffers from Duchenne muscular dystrophy, a progressive terminal condition. The neuromuscular disease restricts lung mechanics and has also confined Caleb to a wheelchair. Before the pandemic, Caleb enjoyed attending school in Tennessee. The family moved to Washington and when the pandemic hit, schools were shuttered, and classes were offered online.

Caleb was looking forward to going to his new school and being with teens his own age again. According to Allie, who joined the Ari Hoffman Show on Talk Radio 570 KVI, she had previously met with the administration at Graham-Kapowsin High school twice before the school year started. Allis said that Caleb had to remove his mask repeatedly during these meetings because of breathing issues and school officials could clearly see what was happening. Additionally, Allie provided the school with extensive medical documentation of her son’s condition.

"He has decreased lung function…his body can absorb the air, but it doesn’t actually get into his lungs…so he is physically getting less oxygen that everyone else."

Allie told Hoffman that when Caleb went to school, Alyse Fritz the assistant principal forced him to wear a mask all day and physically put the mask on him. Fritz subsequently admitted putting the mask on Caleb was her "call" in emails after the incident.

Despite having been provided documentation from Caleb’s physicians at Seattle Children's hospital, and school officials in the pre-school meetings witnessing what happened to the teen when he wore a mask, Fritz said in an email, "Here's the sticking point: to the best of my understanding, we do not have an actual documented medical exemption for Caleb."

"Knowing his health conditions, immunity levels, and not being able to be vaccinated, Caleb is at tremendous risk in our building where we are having to send kids home daily due to being symptomatic, having been exposed to Covid, or identified as part of contract tracing. Those kids then have to quarantine."

According to an email from the school nurse Jena Slater, she acknowledges receiving medical documentation but then claimed, "I have not been able to locate a medical exemption for facial coverings for your student."

Slater added, "The issues that are listed as being discussed all have strong indications for making a person more susceptible to contracting and in having a worse case of COVID-19.  Also, the issues discussed have strong correlations for vaccination and mask use, as ways to protect from adverse health outcomes of COVID-19. Center for Disease Control, as well as other notable sources to include the Muscular Dystrophy Association, recommend cloth facial coverings be worn by those with your student’s condition and co-morbidities to help protect him."

Slater also claimed in the email that wearing the mask "…is something that we discussed in our initial meeting prior to school starting, as well as taking mask breaks, and that we agreed upon as a team, to include yourself."

Salas told Hoffman that in subsequent conversations with the school nurse she was told that Caleb’s condition was "…not a life-threatening illness, it's just terminal, those are two different things."

Allie told Hoffman that it was "baffling" to her how a school nurse could think she knew better than 5 specialists at Seattle children's and the specialists at Caleb's previous care facility Vanderbilt in Nashville. Ironically, Washington State Democrat Governor Jay Inslee's onerous mask mandates have some minor medical exemptions which include conditions such as Caleb's.

After Salas contacted the school about what had happened, she said that the following day, Caleb was segregated alone with his caregiver in an empty classroom for the day.

"It's not right for him to be in isolation…he can't be removed from his regular classroom, no one is teaching him in there, it's discrimination because he actually is exempt."

Allie added, "It's not that we are anti-maskers or anti-vaccine, anti this or that, it's just that literally he has this condition and he can't physically tolerate to have the mask on."

Allie said that she has another child at the school who wears a mask everyday and does not have any physical conditions and "wants to do what she is supposed to do, and there are no issues with her."

According to Allie, the school's latest offer was to send Caleb home with schoolwork because there is no longer an online option. Either that or he would be forced to wear the mask or isolated in the school building. She also said that the school was not following policies for medical exemptions and that disregarding letters from doctors about her son’s condition was denying science.

She added that since the child has been home from school only two teachers had actually sent him work.

Doug Boyles, Director of Communications, for the Bethel school district told The Ari Hoffman Show in an email when asked for comment, "We are not interested in debating the merits of a student's IEP or accommodations in public, even if a parent is willing to do so. We are directly following the law, protocols and the current mandate in trying to reasonably accommodate this student."

Sala told Hoffman that Caleb just wants to make friends and sit in a classroom and be as close to a normal kid as possible, but now cannot come to school. "I don’t understand where, at the very least, is the humanity in that."