Temperatures drop, what should a city do for the homeless?

Canadian cities like Edmonton should leave open public transit stations for the homeless population to sleep in during frigid winter months. 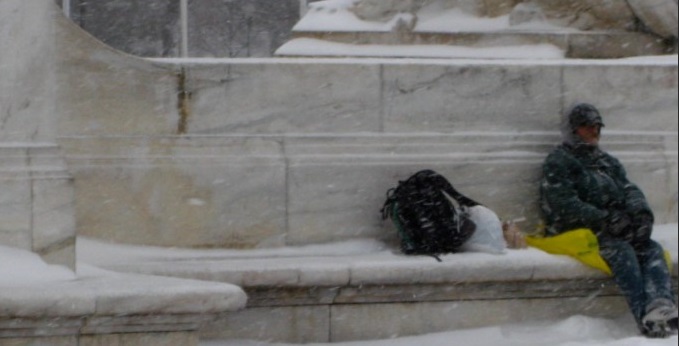 Jon Dziadyk is the Ward 3 Councillor for Edmonton.

No one moves to Edmonton for the weather, and we used to have record unemployment. We now have a substantial homeless population and that tells me that many currently experiencing extreme hardship were once bundled up, cozy, in an Edmonton home. Times have changed. Likely, in years past, they were productive members of society: sleeping in their own bed and working in the morning. Various government policies, economic cycles, bad luck, bad choices, addictions and/or mental illness may have led to their downfall. A government needs to be compassionate and utilize common sense: enter the municipal response to those shivering on the streets during our latest deep freeze. I am disappointed in what is happening in light of what could happen. The goal of any homelessness policy should be to rehabilitate with dignity. The solutions should be practical, modern, and not complicated.

Last year I successfully advocated that our LRT stations should be open during our coldest nights to much opposition. This year, despite my efforts, as a City Councillor, our homeless are out of luck.

Picture this: a public, heated, safe building sitting empty during a dark winter night has its doorway occupied by a homeless person aiming to capture a scrap of heat escaping from the mailslot. That is essentially what can be seen outside of a LRT station in Edmonton, and across the country. Our train stations close nightly and yet they are heated and designed to accommodate large volumes of people.

There are many problems with this picture, but there are two which I would like to address. The first is that there is nothing stopping this unused public space from being open overnight to allow our most vulnerable to sleep with a shed of dignity. The second problem is that—here in Edmonton—our dedicated homeless shelters are actually not full, even during the most severe winter storms. Why then are there homeless people in the doorways? What are our shelters doing wrong? If we cannot meet their basic needs, how will we rehabilitate them into society at large?

Let’s face it, governments everywhere fail at being efficient and adaptive. If a private entity had empty space that could be used for something else, you bet their bottom dollar they would find a use for it. Our LRT stations are closed for several hours every night and are not being used for what could be a lifesaving service. Sleeping outside in our winter city can be fatal at 5 below, let alone in negative 30 temperatures.

In 2009, Edmonton put forward a plan to end homelessness. Given that we are having this conversation regarding our homeless population a decade on, we have not succeeded. At what point do we reevaluate our efforts? We can alleviate the suffering of those experiencing homelessness by opening our warm public doors for a few hours until a permanent and sensitive solution is found.

I view the opening of our unused LRT stations during the night as a Band-Aid for the deeper problem. The real issue is why are our services for the most vulnerable being left largely unused? Are the services not being utilized because those who need them are not aware they exist? Can they not access them? Is the lack of co-ed sleeping quarters deterring them? In this woke era of safe injection site acceptance, are the conduct policies at shelters too strict? We need answers to these questions to find out why we have exterior doorways occupied and beds empty. For whatever reason, segments of the homeless population will not go into our homeless shelters. So it’s incumbent upon the city to modernize our services.

In rebuff to the LRT proposal, and in response to concerns raised about our homeless predicament, the City will now be opening a portion of a recreation centre just outside of the downtown core during extreme cold spells. This checks the dignity box but misses the point.

Their opposition to the LRT station use is that transit staff are not trained to deal with the homeless population and, when it was tried before, there were a few fist fights and spills of bodily fluid. I would counter and say that, obviously, transit staff should not be involved and that the referenced problems will occur anywhere this population congregates. The rec center is fancy but analogous to the LRT station except that it is not located where the homeless population actually is. Whatever arguments are used against the train station could be the same ones used against the rec centre idea. I fear that the homeless will not travel to the supposedly well thought out alternative.

As a City Councillor I sometimes fear that we look for complicated solutions versus utilization of the obvious assets. We justify spending more money because we want to congratulate ourselves on the solutions and the process of how we got to those solutions. Something as simple as hiring security to open the LRT gate is just a little too uneventful.

To the readers from the rest of Canada, many of our homeless are former energy workers. The Alberta economy is hurting and meaningful employment is the key to the recovery. Government policies that have hurt our industries have been the start of the problem. Let’s not have local paternalistic government policies perpetuate the problem or it will become a crisis.