Ten things you should know about Ilhan Omar

Ilhan Omar has received a lot of attention from the American mainstream media. Even outlets in Canada have been talking… 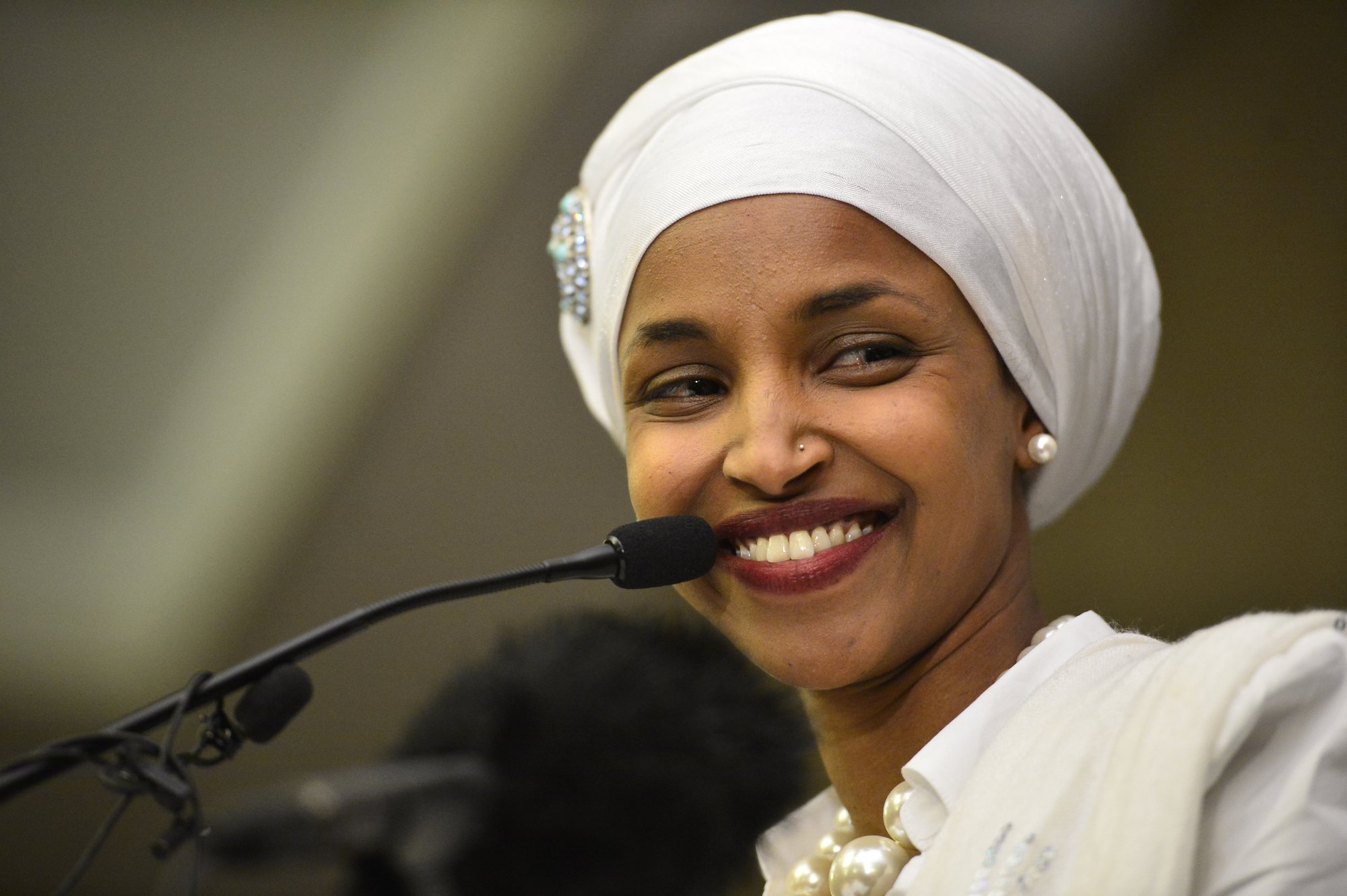 Ilhan Omar has received a lot of attention from the American mainstream media. Even outlets in Canada have been talking about Omar and her political opinions.

For those of you who don’t know much about this firebrand Democrat, here is a list of ten important facts about the controversies surrounding Omar.

1. Some people believe she married her brother

According to an investigation by Conservative activist group Judicial Watch, there is evidence that Omar was once married to her alleged biological brother Ahmed Nur Said Elmi.

Critics have said the marriage was part of an alleged bid to skirt immigration laws, according to the Star-Tribune.

The claim has even reached Donald Trump who said he had heard the allegation but knew nothing about it.

Omar has denied the claims on numerous occasions and it appears the claim that Omar used marriage to gain U.S. citizenship is false. She gained U.S. citizenship in 2000 at the age of 17 when her father did. This is two years before her first marriage.

It is more likely that Elmi was able to gain a U.S. green card by marrying Omar, but a lack of evidence is, once again, an issue. Either way, Elmi moved back to the U.K. after their separation in 2011.

Another claim exists that Omar may have committed polygamy, which is illegal in the U.S., by being married to two men at the same time. This claim is more complex and remains inconclusive.

Here’s what we know based on a Politfactbreakdown:

She legally divorced her second husband in 2017. Thereafter, she legally married her first husband, the father of her three children. But as of July 2019, she has split up with Hirsi and it is possible they are getting divorced, again.

Finally, on the claim that she married her brother, this also doesn’t appear to have much weight behind it.

According to the Associated Press, Omar has stated that she is the youngest of seven children. Her marriage certificate with Elmi has him documented as being three years younger than her. Official birth certificates would make this issue conclusive, but they were lost during the Somalian civil war.

As such, it very well could be that many claims surrounding her marriage to Elmi are baseless.

2. She was fined for filing phony taxes

In 2014 and 2015 Omar filed joint tax returns with Ahmed Hirsi, a man she wasn’t legally married to at the time, which is against U.S. federal law.

In relation to this event, it was discovered that Omar also used thousands of dollars in campaign funds for non-campaign related travel expenses.

Because of the tax evasion and campaign finance violation, Omar was fined a total of $3,500 USD for these incidents, which she was forced to pay using her own finances.

3. There is an ongoing ethics complaint against her for violating federal and state laws

On July 22, Judicial Watch announced that it had filed an ethics complaint with the Office of Congressional Ethics over potential perjury, immigration fraud, and tax fraud, among other violations.

“The House of Representatives must urgently investigate and resolve the serious allegations of wrongdoing by Rep. Omar,” said Judicial Watch  President Tom Fitton.

Central to the ethics complaint is Omar’s marriage to Ahmed Nur Said Elmi, her second husband.

As mentioned in part 1, the claim that Elmi is her “biological brother” is only speculative.

However, photographic evidence that she and Elmi did have contact in 2015, when Omar formally stated that they did not in an “Application for an Order for Service by Alternate Means”, while religiously married to another man, could constitute perjury.

Furthermore, as mentioned earlier, the possibility that Elmi received a U.S. green card through his marriage to Omar may constitute immigration fraud, even if he hasn’t taken advantage of it.

Subsequent investigations following the ethics complaint may lead to more information being revealed.

4. Has peddled in anti-Semitic dog whistles

On several occasions, Omar’s comments have sparked outrage and offense among Jewish Americans.

In a 2012 tweet, Omar parroted the common anti-Semitic trope that Jewish people have “hypnotized” the world to do their bidding. Despite the outrage around the comments, Omar defended her statements.

In other comments, Omar has also accused Jewish-Americans of having a double allegiance to Israel and that it influences their own political decisions, which is a common anti-Semitic trope.

Omar’s anti-Semitic dog-whistling has led to condemnation even among her colleagues.

5. Once requested lenient sentencing for an ISIS recruit

In 2016, Omar tried to intervene in the case of a man accused of attempting to join ISIS.

She wrote a letter to a judge on behalf of Abdirahman Yasin Daud pleading that he receive a more lenient sentence.

“Incarcerating 20-year-old men for 30 or 40 years is essentially a life  sentence. Society will have no expectations of the to be 50 or 60-year-old released prisoners; it will view them with distrust and revulsion,” wrote Omar.

Daud was eventually sentenced to 30 years in prison for attempting to acquire fake passports to travel to Syria, commit murder overseas, and for  conspiring to provide material support to a terrorist organization.

6. She was born in Mogadishu, Somalia

According to her biographical record, Omar was born in Mogadishu, Somalia and was the youngest of seven children.

Her family fled Somalia as refugees in the wake of the Somalian civil war, eventually arriving in Virginia before relocating to Minneapolis.

In 1995, her family received asylum from the U.S. government and, five years later, she received her U.S. citizenship along with her father.

7. Omar is the first Somali-American elected into congress

Omar made history by being the first Somali-American elected into the House of Representatives.

Furthermore, alongside Rashida Tlaib, Omar is one of the first Muslim women to enter congress.

Omar was elected in the 2018 midterm elections when the Democratic Party was able to secure congress from the incumbent Republicans.

8. Has claimed that illegal immigrant detention centers are “concentration camps”

Omar has defended her colleague Alexandria Ocasio-Cortez’s use of the term “concentration camps” to define the illegal immigrant detention centers in the United States.

The term’s use has been widely criticized by conservatives and several prominent Jewish voices in the country as being historically ignorant and a source of disinformation.

Omar has used the term herself as well, claiming that “There are camps and people are being concentrated.”

9. She has called for the income tax rate to be raised to 90%

Omar and her colleagues have been making calls for increased tax rates on the wealthy for a while.

In one instance, Omar has said that the income tax rate should be even as high as 90% for America’s wealthy.

“One of them, is that we can increase the taxes that people are paying who are extremely wealthy in our communities. So, 70 percent, 80  percent, we’ve had it as high as 90 percent. So, that’s a place we can  start,” said Omar.

She went on to mention the increases in military spending post-9/11, the suggestion being that some of those funds should be reallocated to other parts of the government such as healthcare or education.

Omar has also hosted Canada’s Minister of Citizenship and Immigration Ahmed Hussen in her home state of Minnesota to discuss the situation along the border.

Honored to host Canadian Minister of Citizenship & Immigration Ahmed Hussen today, who traveled to MN to discuss NAFTA & how we can come together to find humane solution to control illegal migration from the ?? to ?? through MN borders. I look forward to future collaboration pic.twitter.com/4XRzaGbJxS— Ilhan Omar (@IlhanMN) December 9, 2017

Hussen, who is a Somali-Canadian, is also a refugee like Omar, and has often used his position to call for the acceptance of more refugees for purely economic reasons.