"Immigrants have been more than willing to leave Bexar County after being abandoned, homeless, and 'left to fend for themselves,'" a spokesperson for DeSantis responded. 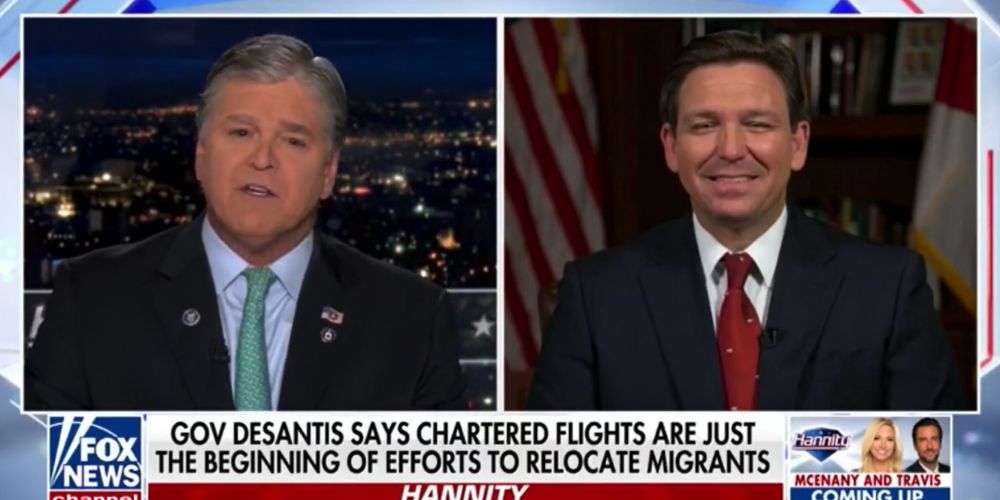 Bexar County Sheriff Javier Salazar, a Democrat in Texas, announced on Monday that his department is opening a criminal investigation into the governor’s actions, but was unable to cite any criminal statutes DeSantis may have violated, and instead said the governor's actions were "distasteful."

In a video, Salazar claimed that the 48 migrants were "lured" from a Migrant Resource Center in San Antonio, Texas under "false pretenses" and flown to Florida, where they were then taken to Martha’s Vineyard.

Salazar said that these migrants were offered jobs and "the solution to several of their problems," and were "unceremoniously stranded in Martha's Vineyard."

"Immigrants have been more than willing to leave Bexar County after being abandoned, homeless, and 'left to fend for themselves,'" a spokesperson for DeSantis responded in a statement.

"Florida gave them an opportunity to seek greener pastures in a sanctuary jurisdiction that offered greater resources for them, as we expected. Unless the MA national guard has abandoned these individuals, they have been provided accommodations, sustenance, clothing, and more options to succeed following their unfair enticement into the United States, unlike the 53 immigrants who died in a truck found abandoned in Bexar County this June," the spokesperson added.

DeSantis told Hannity Monday night, "Millions of people since Biden has been president illegally coming across the southern border. Did they freak out about that? No. You’ve had migrants die in the Rio Grande. You had 50 die in Texas in a trailer because they were being neglected. Was there a freak-out about that? No, there wasn’t."

"You’ve had criminal aliens get across that southern border, and victimize Americans, killing some, raping some, was there any type of outrage about that? No,” DeSantis continued. “And then, of course, we know fentanyl deaths are at an all-time high. Where’s that fentanyl coming from? It’s coming over the open southern border."

Hannity asked DeSantis, "Just for the record: this was voluntary. All migrants were put up in hotels, given accommodations, they were fed, they were showered, they were offered haircuts and any other services that were needed, correct?"

"Yeah," DeSantis replied. "And not only that — they all signed consent forms to go. And then the vendor that is doing this for Florida provided them with a packet that had a map of Martha’s Vineyard. It had the numbers for different services on Martha’s Vineyard. And then it had numbers for the overall agencies in Massachusetts that handle things involving immigration and refugees. So, it was voluntary and all of the other nonsense you’re hearing is just not true."

"I think what we’ve been able to do is show that this border is a disaster. Biden failed on this as much or more than on any other policy, and now people are talking about it," DeSantis continued.

He added, "They accused the governors of Arizona, Texas, and me of political stunts dealing with illegal immigration. But the biggest stunt was Biden coming into office and reversing Trump’s policies, not because Trump’s policies were not working — he reversed them because he wanted to virtue-signal to his base and he wanted to show that he thought Donald Trump was bad."

DeSantis said adding that Biden knew "what would end up happening."

"He (Biden) has pulled the biggest political stunt."