The Liberals are solely responsible for the current negative attitudes towards immigrants in Canada. 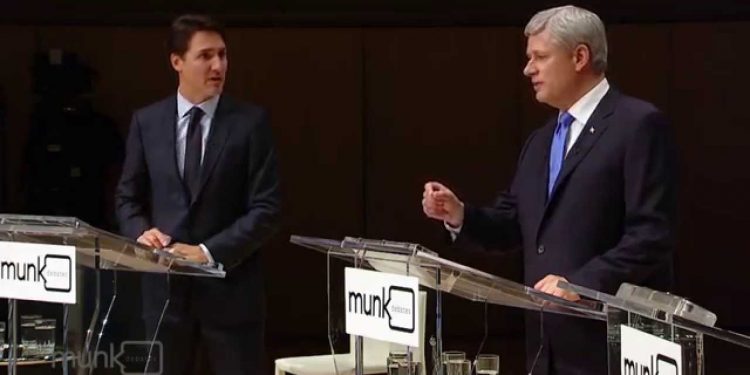 Blaming everything on Stephen Harper has been a favourite tactic employed by the Liberal government to avoid responsibility on a swathe of issues.

Nowhere has it been dished out with such tenacity and consistency as on the topic of immigration.

According to Immigration Minister Ahmed Hussen, the Liberals inherited a “broken system” from the former Conservative government and have been playing catch up ever since.

Disregarding whether this claim is true or not, the argument might have had some legitimacy in the early years of Trudeau’s term, but it now rings hollow approaching the next election.

Here are four reasons why the “blame Stephen Harper” claim doesn’t fool anybody.

They had four years to fix it

Blaming the last administration for your government’s failures only works for so long before people will start to doubt you.

Nearly four years into Justin Trudeau’s term, and very little has been done to fix the “broken system”. In fact, things have gotten immeasurably worse.

Only during this very last year of a potentially one-term government, have the Liberals put forward some half-baked solutions to the chaos at our border as a way to pander for undecided votes.

The current solutions are simply patch jobs on a sinking ship.

Forbidding asylum claimants from making multiple claims won’t even make a significant dent in the current backlog and regular intake. “Talks” with the United States about the Safe Third Country Agreement have gone nowhere, and streamlining refugees into the economic immigration system will only burden an already struggling ministry.

If the Liberals have failed to turn things around in four years, how are Canadians to expect that another term of the same old approaches will solve anything?

Canada has officially resettled more refugees than any other nation in the world in 2018, according to the United Nations.

Of course the error is not in accepting refugees altogether but in the unjust border skipping which favours those who have the privilege to make it into the United States, while those waiting in squalid refugee camps get the shorter end of the stick.

Having the highest refugee intake in the developed world is not necessarily a virtue if Canada is unable to properly integrate and house legitimate refugees.

Refugees and migrants are currently being funnelled through overflowing homeless shelters and taxpayer funded hotels to accommodate the large influx in metropolitan areas like Toronto and Montreal.

Provinces are seeking more and more money from the government to properly deal with the situation and burden while the government is currently only offering a fraction of what is asked for.

While the government puts on airs that the situation is under control or the intake is being reduced, the Immigration and Refugee Board is struggling to barely keep up with processing the backlog of claims.

If the Liberals were serious about fixing a “broken system” they should start by reducing that backlog, not stretching it ad infinitum.

Attitudes towards immigrants have never been worse

The Liberals are solely responsible for the current negative attitudes towards immigrants in Canada.

Before Justin Trudeau was elected as prime minister, Canadians had a generally favourable view of immigrants and were willing to increase the quantity of newcomers into Canada.

Now? After nearly four years of Liberal mismanagement and nearly open border conditions, Canadians are thinking about immigration negatively. In 2014, only 36 percent of Canadians wanted to see our immigration targets reduced, four years later that number reached nearly half of the population (49 percent).

Polls show that this trend is affecting voters of all parties, even among Liberals, 41 percent of whom want to limit immigration.

While the Liberals continue to point fingers and call all critics “hatemongers” and “conspiracy theorists”, the truth is that there is nobody else to blame for the situation but themselves.

These attitudes do not come about in a vacuum, they are the result of a segment of the population feeling as though they have been lied to and not consulted. Further transparency, accountability and communication would fix the issue, but don’t expect any of that from Trudeau.

This point is probably one of the most shameful and least avoidable facts to plague the Liberal handling of the asylum system.

If the Liberals were keen on making things more efficient they wouldn’t let the asylum wait times balloon to over five years under their watch.

According to the latest estimates, the backlog is expected to reach a mammoth 100,000 claims by the year 2021.

This means that numerous asylum claimants will be left in Canada for this period before even reaching a decision on their claimant status.

Things have gotten so bad that the IRRB has even admitted that eliminating the backlog is no longer an achievable target.

The truth is, that this is all on Trudeau and Canadians should hold the Liberals accountable for the reckless handling of Canada’s once esteemed immigration and refugee system.