The Guardian set up a ‘cotton ceiling’ blind date

If The Guardian is to be a trusted dating service, then they have a responsibility to respect people’s gender and sex preferences, or at least to disclose. 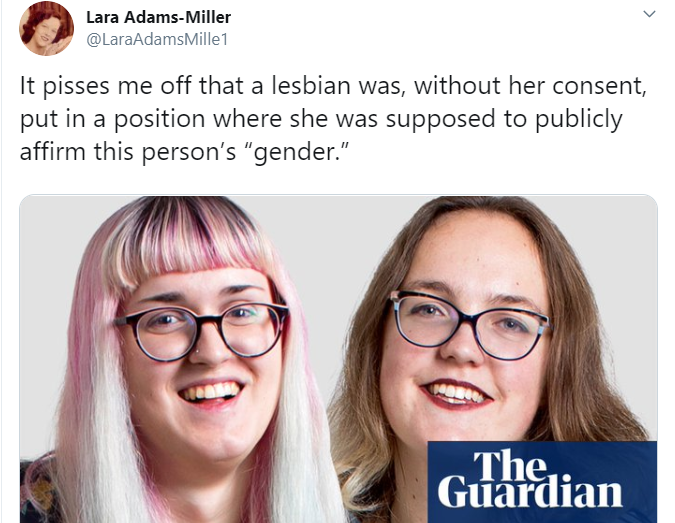 Anna and Jen went on a date. The Guardian set it up, as part of their blind dating service. It was a sweet little date, both Anna and Jen enjoyed themselves. They shared some wine, they shared a kiss, and the whole experience was written up in their Blind Date column. The Guardian didn’t reveal the daters’ genders to one another—presumably because The Guardian’s editors think everyone should be okay with being pansexual.

Anna gave the date an 8 out of 10. A second date was talked about, but not carried out. All in all though, a success for the news outlet’s blind dating program.

“Yesssss! Outside the station. I am so bad at kissing, though, so I hope I didn’t embarrass myself. Her glasses fogged up, which was super cute. I’d like to see her glasses fog up again,” she said.

There was just one little hitch, however, which was that Jen is trans; Anna is a biological woman and a lesbian.

By all accounts, Anna was charming, and she and Jen had a good time. But the internet picked up on this detail of disclosure. It was posited by gender critical women that this was an unreasonable oversight, that the biological sex of a blind date should be at least one thing the participants would know about each other.

Others had the idea that the second date was cancelled by Anna because of Jen’s transness.

The Guardian claimed that it did not disclose participants’ because it did not ask for the info. Presumably, before setting up blind dates, people are asked what they are looking for in a mate. Dating apps give users the opportunity to state what kind of sexual partner they are looking for, but maybe The Guardian doesn’t do this. Maybe instead there’s the presumption that all people can see past gender, to the sweet and gooey insides, and find true like no matter what the external package

If so, then kudos to The Guardian for their ingenious plan to overturn millennia of sexual and biological evolution with just a few pixels, a blind date, and a snog outside the train station. But in today’s climate of gender confusion, I don’t know if we should be so generous to these editors.

Perhaps they believed that the right thing to do was to categorize a trans woman who is into women as a lesbian, for the purposes of breaking through that cotton ceiling. Maybe they figured that if Anna wasn’t into biological men who claim to be lesbians, that would be her problem.

For their part, Jen and Anna behaved like the civil, thoughtful, considerate young people that they probably are.

There was no love connection this time, but the next time The Guardian sets up two people of undisclosed genders, perhaps they’ll get lucky. It is not appropriate for a dating service to be so enthralled with the blind date idea that they are not even honest about the gender of the people being set up. If The Guardian is to be a trusted dating service, and maybe that’s not such a great idea, then they have a responsibility to respect people’s gender and sex preferences, or at least to disclose. Not everyone is into surprises.