While Foreign Affairs Minister Chrystia Freeland co-hosts the Global Conference for Media Freedom: London 2019, the freedom of the press… 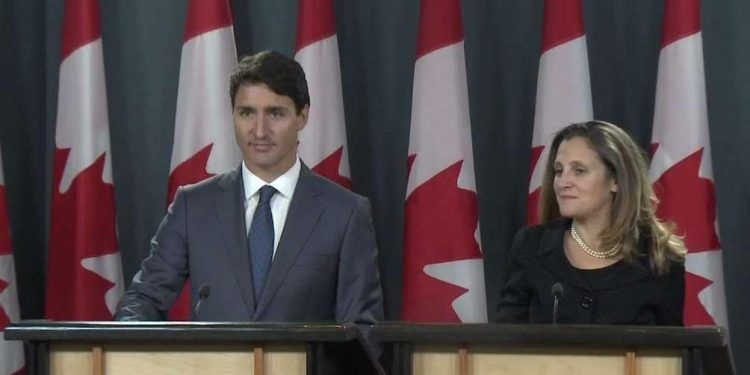 While Foreign Affairs Minister Chrystia Freeland co-hosts the Global Conference for Media Freedom: London 2019, the freedom of the press continues to erode here at home.

Since Justin Trudeau was elected in 2015, Canada has plummeted from eighth place on the World Press Freedom Index to now being number 18 on the list, just ahead of Uruguay.

This fact alone should be shameful but the reality behind that ranking is far more dismal and concerning.

For years Vice journalist Ben Makuch has fought to withhold messaging logs acquired from a protected source from the RCMP in an ongoing terrorism investigation. On July 4, he was ordered by the Ontario Superior Court to hand over those documents or face legal ramifications.

Regardless of the fact that the source was involved with a terror organization, the protection of sources and material is integral to the profession of journalism.

If the RCMP have the power to attain confidential sources in this case, they could extend that authority to future cases. Without the protection of anonymity or confidentiality, people will be less likely to speak to media out of fear for their safety or repercussion, in turn making it harder to keep those in power accountable for their actions.

At every turn, the Liberals have forwarded legislation and policy which threatens the integrity and independence of media in Canada.

The recommendation by the Liberal-dominated Justice Committee to revive the draconian Section 13 of the Human Rights Act is just one example. The hate-speech legislation which was repealed by the Canadian government in 2013 after journalists challenged the law on the basis of press freedom, could be reintroduced to Canada if the Liberals are elected again in 2019.

Let’s not also forget that despite being introduced by the Harper government, the Liberals were also onboard with Bill C-51 which gave intelligence authorities further power to access and share information about citizens and expanded the influence of CSIS. In fact, the Liberals were the ones to see the legislation through to the end.

In any country, the free press is not only threatened by the potential for censorship but also through the possibility of being compromised by state intervention through subsidies and financial influence.

On this front too the Liberals have worked to undermine Canada’s media landscape to the tune of a $600 millio media buyout. As part of their media subsidies, the federal government will also create a ” Qualified Canadian Journalism Organization” list which will only include government approved outlets.

Coupled with the fact that the Liberal eye towards curbing negative coverage through the guise of combating “fake news” from online sources, while not providing the same scrutiny for mainstream media organizations, the current government has shown themselves more than willing to control who gets to participate in dialogue.

Their disdain for alternative news sources and voices that are critical to the Trudeau regime is apparent and real. The most recent example of this, as reported on by The Post Millennial is Minister Freeland’s own hypocritical behaviour.

While allegedly promoting press freedom in London, she was allegedly attempting to limit press access to conservative journalists.

The fact is that for a democratic society like Canada, the careful balance of accountability between the state and those that criticize the state must be maintained.

For a government that has several MPs who are journalists, including Freeland herself, they seem to lack basic respect even for the most basic principles of a free press.