The mob wasn't satisfied with destroying statues, so now they're coming for your homes and families

In dozens of instances, the statues came down, but the protestors have not been appeased. They are no longer intent on destroying statues and public property; they are now moving on to people. 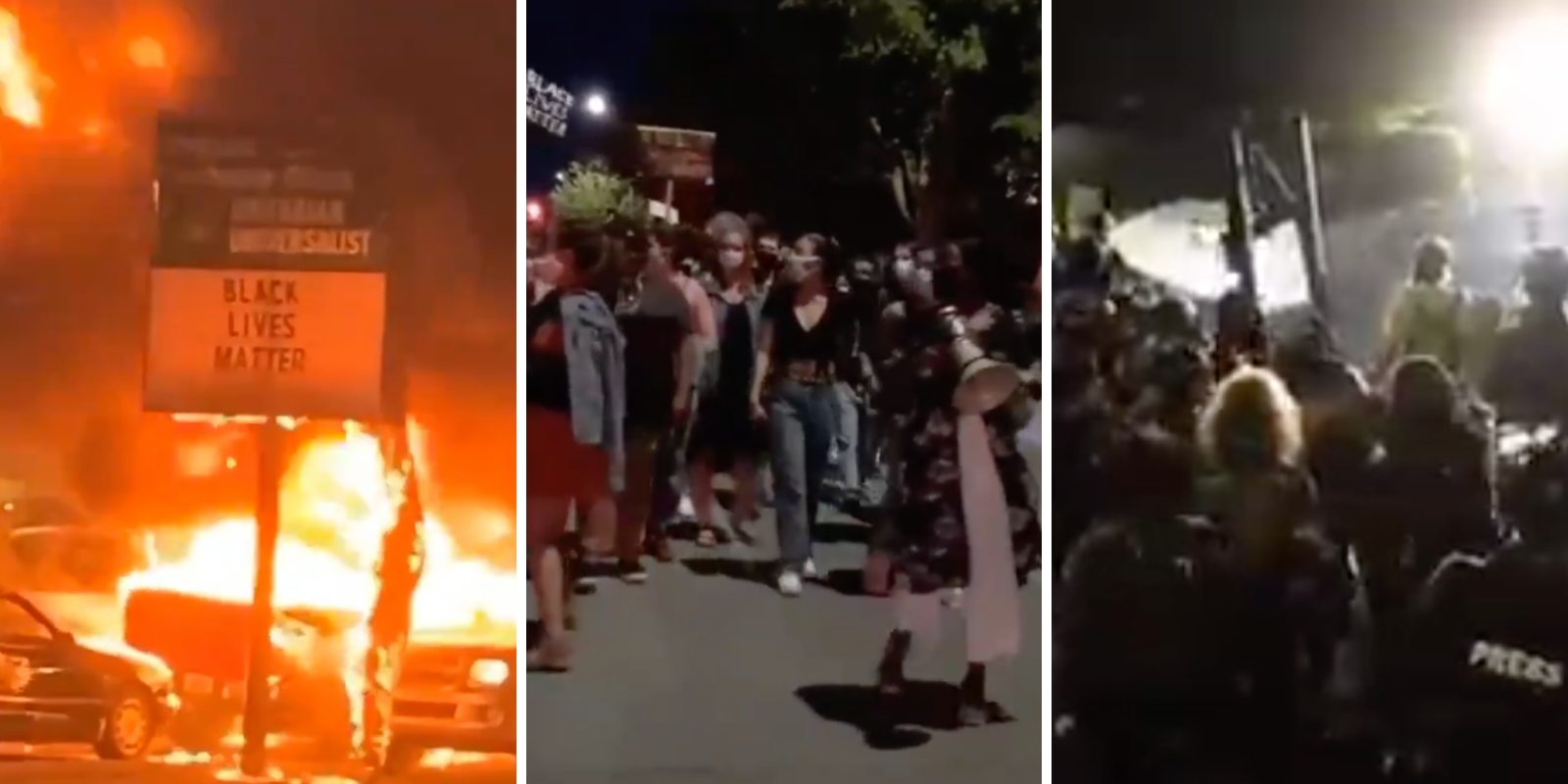 Statues starting coming down in June. It’s mid-August, and the "peaceful protestors" are roaming through residential neighbourhoods yelling at people in their homes. We heard from activists and agitators that the statues had to come down, that they were symbols of an unsavory past and could not blight our town centers any longer.

In dozens of instances, the statues came down, but the protestors have not been appeased. Protestors are no longer intent on destroying statues and public property; they are now moving on to people.

We hear so often that property damage isn't violence. Ariel Atkins tells us that looting is merely reparations. The New York Times’ Nikole Hannah-Jones said that "Yes, it is disturbing to see property being destroyed, it's disturbing to see people taking property from stores, but these are things."

So when the fight moves from statues, government buildings, and town squares out into neighbourhoods, is that violence? Or is it merely people making use of their right to freely assemble on residential streets?

Colorado saw protestors marching through a residential neighbourhood to the home of Sgt. Alan Van't Land, who is alleged to have shot and killed Devon Bailey. Protestors called out to him through a megaphone, demanding that he "come out and turn [him]self in."

In Portland, protestors marched through the dark residential neighbourhood of Normandele Park, setting off car alarms, and chanting "ACAB all cops are bastards!"

They prevented residents of the area from driving to their homes. While still others performed improvisational dances in front of random homes.

Another video of protestors chanting and marching through a private neighbourhood shows them shining bright lights on homes while yelling "Wake up, wake up, wake up motherf***er wake up!"

Recently, a guillotine made an appearance in Portland. While this was outside the Kelly Penumbra building, the implications were clear. Neither buildings nor statues are much at risk of decapitation.

In a send-up of the hilarious mainstream media that insists on calling the protests peaceful, on Twitter user joked that it was "a mostly peaceful guillotine."

Seattle's mostly peaceful protestors called out to residents to "march with us," and called out "we're fighting for you."

The addressed one person directly, calling on Mikhaila to come out and march with them if she believes that black lives matter.

When residents came out to ask the protestors to tone it down, they were told that it was the epitome of white privilege to complain about the noise.

In Charlotte, diners at an outdoor restaurant were harassed, with protestors yelling "white silence equals violence," and surrounding their tables.

Pittsburgh protestors took their fight to Mayor Bill Peduto's house even though he does have an office and keeps regular business hours.

In New York City, it was the Democrat schools chancellor, Richard Carranza, who heard from teachers at his home who were gathered en masse to protest schools opening. Teachers reported that they were afraid to gather with others in a classroom setting, so they did so at Carranza's house, instead.

Michigan found protestors for Yemeni's marching through a residential neighbourhood staging a protest for BLM. They chanted "They don't want us in the streets, they don't want to see us free."

Minnesota's mostly peaceful protestors marched through a residential neighbourhood before screaming through a megaphone.

"It's traumatizing to come out here and have to f***ing say our relatives' names that can't be with us no more! So f*** you for laughing because this sh** ain't no f***ing joke," a woman yelled through a megaphone.

"And that little brown girl that's over there it's only a matter of time before you f*** her up too!" She said at those trying to exist peacefully and privately within their homes.

"Y'all laughing like we won't burn this city down motherf***er. That house down there? This house can look like that if one more black man or brown man be killed.

The crowd cheers at these words, directed at people who did not join in the protests when they were staged in more centralized areas, but stayed home. The protestors, however, were undeterred, and brought their message loud and clear.

Protestors in Chicago went to residential neighbourhood to curse the mayor and the police department as loudly as they could.

First, they attacked municipal and federal buildings, taking their demands straight to their leaders, in some cases setting fires. They demanded that those buildings be given over to protestors, or at the very least, that the government within concede to activists demands.

In Seattle, a police precinct building was ceded, for a time, to protestors. In cities across the country, city councils promised to take funds from police budgets.

Yet the protestors were unsatisfied with government capitulation. With much if not all of the mainstream media on their side and pandering from public officials desperate to regain control of their cities, one would have easily believed that protestors would have been appeased. But they were not, they have not have been.

Riots have been declared in at the very least dozens of cities across the country as shops were looted and downtowns turned into chaotic and wilding street fights. People have been killed, crime has skyrocketed, mayhem has reigned.

Mainstream media calls the protests “mostly peaceful.” Activists say that looting is not theft but reparations. Increased criminal activity, including the widespread arson, assaults on law enforcement officers, and shooting deaths of children, have been blamed by cowardly political leaders on economic hardship and framed as part of the struggle for equality.

These cowardly local politicians, almost exclusively Democrats, need to act in the interest of public safety. Their cynical tactic to turn violent riots into an anti-Trump opportunity has already cost lives.

We've seen glimpses of two factions fighting one another in the streets in Portland. We've seen a new spectre of violence rising in Kenosha. Democrat leaders of these cities and states refuse to condemn the violence, instead backing the activists intent on destroying the communities that these leaders are supposed to protect. If they don't reverse course and protect innocent citizens soon, people will rise up, and then the nation will be one step closer to civil war.