The mobbing of Debbie Hayton

A transwoman receives threats and online harassment after speaking out against a prominent trans-rights activist. 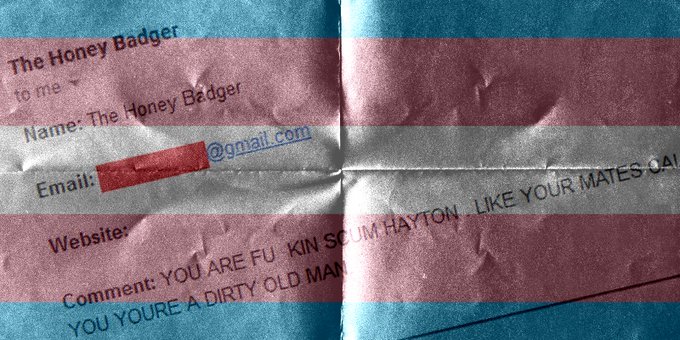 It is a well-known fact that the moment one steps out of line in their social group, consequences will inevitably occur.

However, in this age of social media, coupled with an increasingly aggressive progressive politics, “stepping out of line” now simply means speaking realities and truths that cause the slightest discomfort to the “group.” Consequences can often be dire.

Without question, a modern social line that is absolutely not to be crossed is that of sex and gender. Anything from expressing concerns about the safety and future of children being pressured into hormone therapy, to simply asserting the biological reality of differences in sex are met with immediate hostilities and extreme abuse.

Even being transgender or experiencing gender dysphoria is not a protection from the imminent cancellation that follows expressing a dangerous opinion such as “women are adult human females.”

Debbie Hayton, a high school teacher from Birmingham, England – and person who also happens to be transgender—was recently the subject of an extreme slurry of abuse from so-called “trans rights activists.”

Like apostates from religious cults, transgender people who speak sense and reason are often harassed, intimidated and abused.

While this certainly is not the first time Hayton has faced such treatment, Hayton’s most recent crime was calling into question BBC’s platforming of notorious British transgender activist Stephanie Hayden.

Like Jessica Yaniv, Hayden has a ready appetite for litigation when they do not immediately get their own way. As a self-styled lawyer, they have used their knowledge of the law to frighten and intimidate opponents who have settled out of court to avoid the stress of a hearing in front of a judge. The writer, Graham Linehan—creator of Father Ted and the IT crowd —was subjected to this treatment last year when he shared a Facebook post from a previous victim of Hayden’s behaviour.

To this, Linehan wanted to lend his voice. “Hayden is the perfect example of a fraudster using trans rights as a cover for their activities, and to escape scrutiny of their past. [Hayden is] also a frightening example of what happens when one group is said to be beyond criticism.” He says. “If self-ID ever passed, it would be a charter for opportunists like him to take advantage of the vulnerable and unwary.”

In a recent criminal case where a mother of two was arrested in front of her children and put on trial for misgendering and insulting Hayden, Hayden’s criminal past became public knowledge. Hayden had been before criminal courts on 11 occasions for 21 offences and had spent six months in prison for obtaining property deception. In 1999, Hayden had been convicted of an affray with a golf club.

Considering Hayden’s history of abusing the rights of others, Debbie Hayton took a view that Hayden was not a suitable guest to represent the transgender community and said so:

In normal society, that would be quite unremarkable. But it seems that we do not live in normal times.

In response to the conflicting opinions on guest selection, the BBC decided not include any transgender voices on the programme, and Hayden went on to threaten further legal action towards Hayton.

While Hayden is content to continue to chip away at whatever legitimacy the courts might have by using it as a personal nanny and emotional support system, others take to the dark underbelly of the internet to bark viciously.

Operating though anonymous profiles, they latch on to such action and take the threats to new levels. Unsolicited emails are the new poisoned pen letters – sinister in the extreme. After Hayden was deplatformed from BBC, Hayton began to receive disturbing emails from those who opposed Hayton’s opposition to Hayden’s appearance.

Others ditch the anonymity. However they choose to advertise themselves, the message is loud, clear, and proud: Conform or suffer the consequences.

The supreme irony is that the demands for conformity in the arena of trans rights come in the name of tolerance and progressivism.

But does this sound like a community that is open and inclusive, or one that is fearful and hostile? A community that not only shrieks #nodebate but actively tries to silence those who disagree?