'Trigender' person identifies as male, female, and neither

A new gender identity has recently been announced in the world of TikTok: Trigender, which is the gender identity to describe being male, female and non-binary all at the same time. 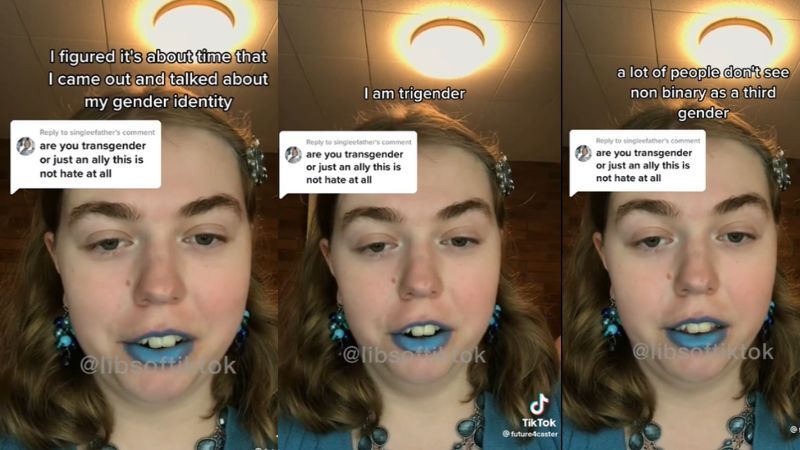 A new gender identity has recently been announced in the world of TikTok: Trigender, which is the gender identity to describe being male, female and non-binary all at the same time.

The young TikTok user who identifies as trigender explained that being trigender is different from being genderfluid in that a trigender person feels all three genders at the same time, all the time, and this feeling doesn’t ever shift or change.


A person who is gender fluid, on the other hand, will tend to feel one gender more strongly than another and this feeling will change over time.

"A lot of people don’t see non-binary as a third gender," said the trigender individual. "Or I guess you could call it a third identity. So how I feel gender-wise is like a man, like a woman, and as neither at the same time."


"I hope this clears things up," said the individual who claims to be both male and female and neither male nor female all at the same time.

There is a vast array of nonsensical gender identities out there, such as demigenderfluid, which is a form of gender fluidity where one’s gender is partly fluid and the other part is static. This is not to be confused with demiflux, which is a gender identity that is also partially fluid and partially static but one of the components is non-binary.

Or we have pangender, which describes people who identify with a multitude, perhaps infinite, number of genders either simultaneously, to varying degrees, or over the course of time.

This may all seem like the harmless absurdity of a youth subculture, but for nations like Canada, where gender identity and gender expression are enshrined as protected characteristics in law, it’s no laughing matter.

In 2019, a Manitoba Human Rights Tribunal awarded $50,000 to a "pangender" individual for the harm endured when not being able to apply for a passport that reflects the individual’s multiple, perhaps infinite, genders.

These gender identities often come with a baffling selection of pronouns, which can shift and change along with the identities. While misgendering is considered to be a form of discrimination against transgender people in Canada, it has never been made clear where the line is drawn, or if indeed there is even a line at all.

Canadians therefore do not know whether they could be brought up on a human rights complaint for not respecting the xir/xem pronouns of a genderqueer person, an issue that Jordan Peterson raised in 2017 during the Bill C-16 debate, for which he earned himself the label of transphobe.