Teen Talk, with the backing of the government tells teens how to know they are transgender, but it gives teens no understanding as to how it feels to be fine within their own bodies. 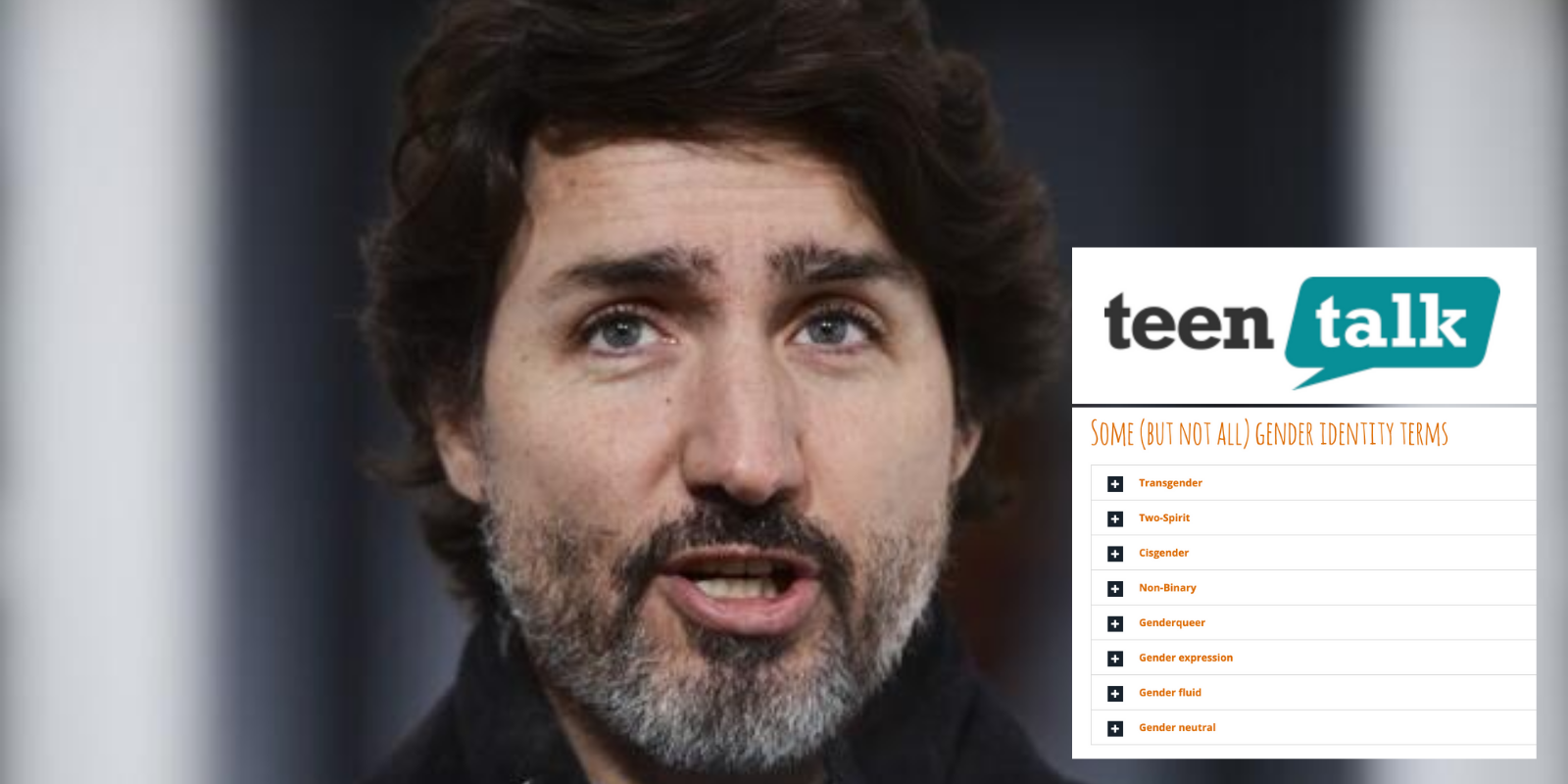 The Canadian government is funding a program that informs teens how they know if they are actually living life as the wrong gender. The program, called Teen Talk, provides teens with the resources they need to figure out if their brains match their bodies, if they are male or female, or if they are something else entirely.

The program teaches that "There are more than two genders," and that what we know as biological sex, as in the existence of male and female reproductive systems, is simply "gender assignment" that is "based on an assumption that someone's genitals match their gender."

"However," Teen Talk goes on to say, "gender isn't about someone's anatomy, it's about who they know themselves to be." It elucidates the many, constructed "gender identities," including "male, female, transgender, gender neutral, non-binary, agender, pangender, genderqueer, two-spirit, third gender, and all, none or a combination of these."

"Gender can be complex," says the government funded gender site for teens, "and people are defining themselves in new and different way as we gain a deeper understanding of identities."

The site goes on to define those gender identities, but there are two identities that are noticeably missing, and they are "man" and "woman." Neither of those are options according to Teen Talk. Instead, these terms are meant to be innately understood, as when, under the heading "cisgender," it describes it as "someone whose gender matches what they were assigned at birth. For example, they were assigned female at birth based on being born with a vagina and know themselves to be female."

But the site doesn't give an indication as to what it means to be female, female is not a suggested identity, not something that is listed among those things to which a person can identify.

The definition of "transgender" makes similar assumptions when it reads "What do we mean assigned at birth? Think about one of the first things the doctor (or midwife) says when someone is born, 'It's a girl' or 'It's a boy.' This is gender assignment and it is based on an assumption that someone's genitals match their gender.

However, we know this isn't always the case and that each of us gets to decide what gender we know our selves to be. It may not align with the genitals we are born with or be part of the gender binary (male-female). For example, someone may be born with a vagina but know themselves to be male."

The answer to that is "Gender is a complex thing. We've only listed a few of the terms that people may use. We know that there are many other ways someone may define themselves and some people prefer to not label who they are at all. You get to decide who you know yourself to be and what (if anything) you like to be called."

Still no real clear of what female and male mean, or woman and man. It answers questions of whether gender identity and sexual orientation are the same thing—they're not. It tells teens how many genders there are: "a whole bunch!" And at this point, it explains that "male and female" are gender identities. The words "biological sex" are not mentioned.

Instead of defining the terms and conditions that are at the root of all of this, that of humans' biological, reproductive dimorphism, Teen Talk states that "It's important to recognize the role that colonization has played in interrupting the knowledge (it tried to stop the knowledge) that there are more than two genders."

Not just that gender itself as been colonized, but that "It is only through the hard work of trans people and their allies that we are finally beginning to see a shift back to embracing, and supporting the gender diverse community."

It is hard to know how a teen would be able to understand that they are neither male nor female without those terms being defined. Even in discussions of birth control, Teen Talk declines to say that females are the ones who are likely to get pregnant.

So much is described on this site and in detail. How bodies work, sexual arousal, birth control, depression, and so many other concepts are thoroughly fleshed out—except what the traditional, normative, male and female are, or how they can be described, or how their reproductive systems work. Teen Talk gives loads of examples of how to know if you are "a whole bunch of genders," but not male or female.

The category of cisgender which is actually what the majority of humans are, has the briefest definition. 37 words give the meaning of cisgender, which would be the term for those who are male or female who understand that they are exactly that.

"Cisgender is a term to describe someone whose gender matches what they were assigned at birth. For example, they were assigned female at birth based on being born with a vagina and know themselves to be female," Teen Talk writes simply, with no explanation of how to identify that.

Teen Talk, with the backing of the government wants teens to know how great it is to be trans, or any of the other myriad genders, but it gives teens no understanding as to how it feels to be fine within their own bodies. Teens don't only need to hear about how it is okay if they are divergent from the norm, they need to know that the norm is also okay.

Teen Talk is a program of SERC, which is funded almost entirely by the government.