Trump visits church that was site of arson, carries bible

President Trump addressed the nation after six days of protests and riots. Then he walked out of the White House grounds and headed for St. John's Church. 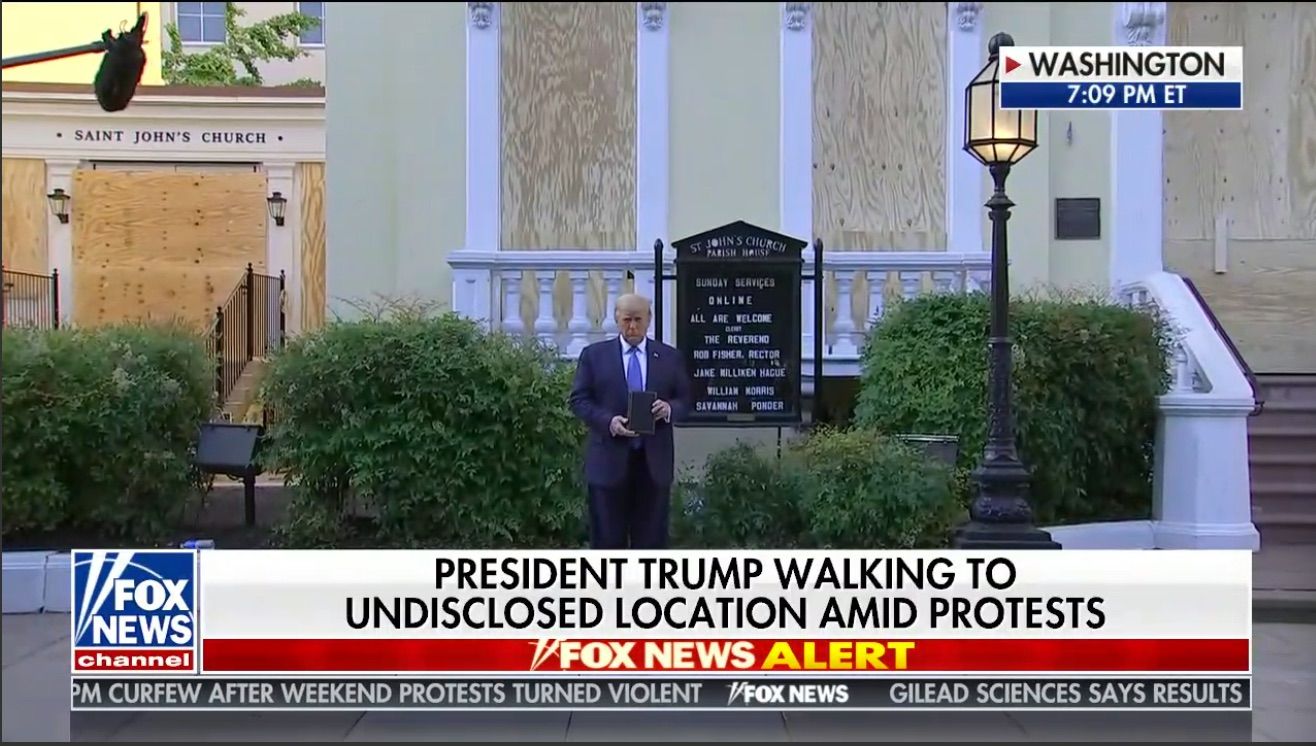 President Trump addressed the nation after six days of protests that in many cities turned violent and destructive. He stepped out into the Rose Garden, while the curfew in Washington DC approached quickly. Then he walked out of the White House grounds and headed for St. John's Church.

After a speech that was forceful in its directives to governors to stop the rioting and disperse the mobs, demanding that states deploy National Guard forces to clear the streets, Trump declined to take questions.

Instead, he stepped away from the podium and began walking. His destination was not at first disclosed, but he headed for St. John's church. Known as the Presidents' Church, St. John's was set on fire by rioters over the weekend. It was a jarring site for many who saw this national historic landmark ablaze.

Trump left the White House grounds on foot, without the usual presidential motorcade. While he was of naturally surrounded by Secret Service and had a large entourage, he walked, primarily, alone.

It is not a common sight to see an American president walking down a city street, but this could have been anyones daily, coronavirus constitutional.

The speech addressed both peaceful protestors and those with destructive intensions. He decried of the death of George Floyd, who was killed in police custody one week ago in Minneapolis.

"My administration is fully committed that for George and his family justice will be served. He will not have died in vain. But we cannot allow the righteous cries of peaceful protestors to be drowned out by an angry mob. The biggest victims of the rioting are peace loving citizens in our poorest communities.

"And as their president I will fight to keep them safe. I will fight to protect you. I am your president of law and order, and an ally of all peaceful protestors. But in recent days, our nation has been gripped by professional anarchists, violent mobs, arsonists, looters, criminals, rioters, antifa, and others.

"A number of state and local governments have failed to take necessary action to safeguard their residents. Innocent people have been savagely beaten. Like the young man in Dallas, Texas, who was left dying in the street. Or the woman in upstate New York viciously attacked by dangerous thugs. Small business owners have seen their dreams utterly destroyed. New York's finest have been hit in the face with bricks.

"Brave nurses who have battled the virus are afraid to leave their homes. A police precinct has been overrun here in the nation's capital. The Lincoln Memorial and the World War II Memorial have been vandalized. One of our most historic churches was set ablaze. A federal officer in California, an African-American enforcement hero, was shot and killed.

"These are not acts of peaceful protest. These are acts of domestic terror. The destruction of innocent life, and the spilling of innocent blood is an offence against humanity, and a crime against God.

"America needs creation not destruction. Cooperation not contempt. Security not anarchy. Healing not hatred. Justice not chaos. This is our mission. And we will succeed, 100 percent, we will succeed. Our country will always wins."