"You may have noticed that Joe Biden announced today a new front in his ongoing war against America's middle class," said Carlson. 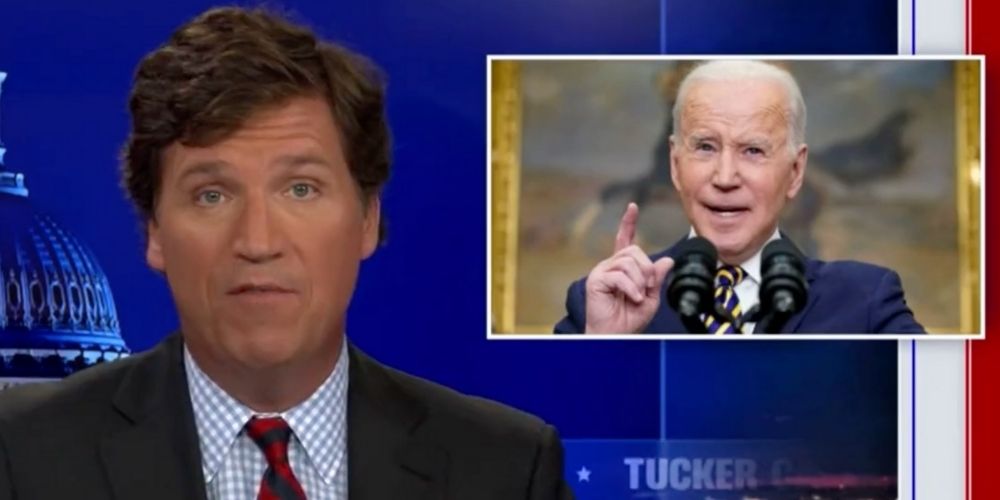 On Tuesday evening, Fox News host Tucker Carlson condemned the sanctions that have been placed on Russia by the Biden Administration, saying that those who would be suffering the most would be middle class Americans, not Putin or Russia.

"You may have noticed that Joe Biden announced today a new front in his ongoing war against America's middle class," said Carlson.

He noted that Biden didn’t frame it in this way, but instead as a "moral victory" over Putin in Russia in the form of banning the import of Russian energy.

Carlson also noted that "every constituency loved it."

"The media agreed that Joe Biden had never seen more presidential. Democratic officials seem deeply relieved, for once they could talk about something other than COVID and the southern border. They'd rather be on offense than defense. Republican leaders, meanwhile, seemed happiest of all they barked like seals, finally a chance to sound tough and decisive without making CNN angry. Thank you, Joe Biden. We can all be John McCain now you rarely see unity like this and the city is divided as Washington," said Carlson.

"The unity was so heavy in fact, so delightful and intoxicating. That no one remember to ask the most basic question. Why exactly are we doing this? What's the point?" Carlson asked.

He said that if the reason was to bankrupt Putin, that wouldn’t work because he has markets for Russia’s oil in other countries. He also noted that Biden didn’t claim that the sanctions would end the war in Ukraine.

"So who exactly are these sanctions aimed at? Think about it. If you want to identify the target of a penalty consider who's going to suffer most from it. And in this case, the answer could not be clear. It’s middle income Americans," said Carlson.

"They're the ones who were crushed for two years under COVID restrictions. They're the ones who are about to be pummeled by shutting down more energy sources. Notice a theme here, the people in charge take the middle class above all, so it's not Vladimir Putin who's getting punished. It's American citizens. It's you," he added.

Carlson noted the rising prices of gasoline, which has in turn raised the prices of food, electricity, and anything that travels by land.

Following a clip of Biden during his Wednesday address announcing the ban of Russian energy imports, Carlson said "It takes something like that to tell a lie like the one you just heard at the end of by the statement, 'it's simply not true that my administration or policies are holding back domestic energy production.'"

"Oh, but it simply is true. It's demonstrably true. And everyone knows it. On his first day in office, Biden single handedly killed the Keystone XL Pipeline," said Carlson. "Then just days before Russia invaded Ukraine. Weirdly, Biden's administration shut down all new energy leases and permits on federal land that happened. Vladimir Putin did not do that. Joe Biden did it."

"Let me give you the facts here. Now when they say that, you know the lies are coming and indeed in this case, they arrived promptly. Because oil companies have not used all the permits they've received, Jen Psaki told us, that means this is their fault. They're not trying hard enough to produce energy they could but they don't want to," said Carlson.

"But wait a second, Jen Psaki, what if there's no oil or gas underneath the permanent land? In that case, energy producers would want permits for land where the energy is. Turns out they don't want dry wells, they want wells that flow. But they’re not getting it thanks to the green new deal lobby that completely controls this administration, they can't get those permits. And that's what's happening here," he added.

Carlson pressed those who doubt his statements to ask those who work in the energy business about Psaki’s comments.

"Jen Psaki just lied to you. They are all lying to you. You probably guessed that already, but you can't say it. Because if you wonder what these policies may be doing to your country or to your family, you are selfish and disloyal. In fact, you're unpatriotic, because real patriotism is caring about Ukraine first. And by the way, caring about Ukraine, means prolonging a bloody war in Ukraine until the entire country of Ukraine has been destroyed and millions of Ukrainians are refugees. We know we can do it because we did it in Iraq. We can do it in Ukraine. That's patriotism," Carlson concluded.