Inside the Classroom was reported to Twitter moderators by a teacher who was previously exposed by the account for claiming to teach children about critical race and gender theory in a math class.

But a much smaller account, Inside the Classroom, was locked out for "hateful conduct" after referring to Levine as "Mr. Levine." The account was reported to Twitter moderators by a teacher who was previously exposed by the account for claiming to teach children about critical race and gender theory in a math class.

Inside the Classroom made the reference to Levine while sharing video of Levine speaking to Stanford Medical center. Levine made statements about sex changes for children, which Levine supports, saying that "experts" should be responsible for deciding care for so-called "trans kids," and that state legislators should not seek to prohibit the drugging and surgical alteration of children and teens in service to gender ideology. Inside the Classroom also said that Levine pushed "grooming experts" as those who should have authority over child sex changes.

In response to these tweets, Twitter mods said "Hi Inside The Classroom, Your account, @EITC_Official has been locked for violating the Twitter Rules. Specifically for: Violating our rules against hateful conduct. You may not promote violence against, threaten, or harass other people on the basis of race, ethnicity, national origin, sexual orientation, gender, gender identity, religious affiliation, age, disability, or serious disease."

Inside the classroom was asked to delete the two offensive tweets, and did so. When The Babylon Bee and Jordan Peterson were brought up on similar charges, and asked to delete, they both refused. When those accounts were reinstated on Friday, it seemed that times had changed. 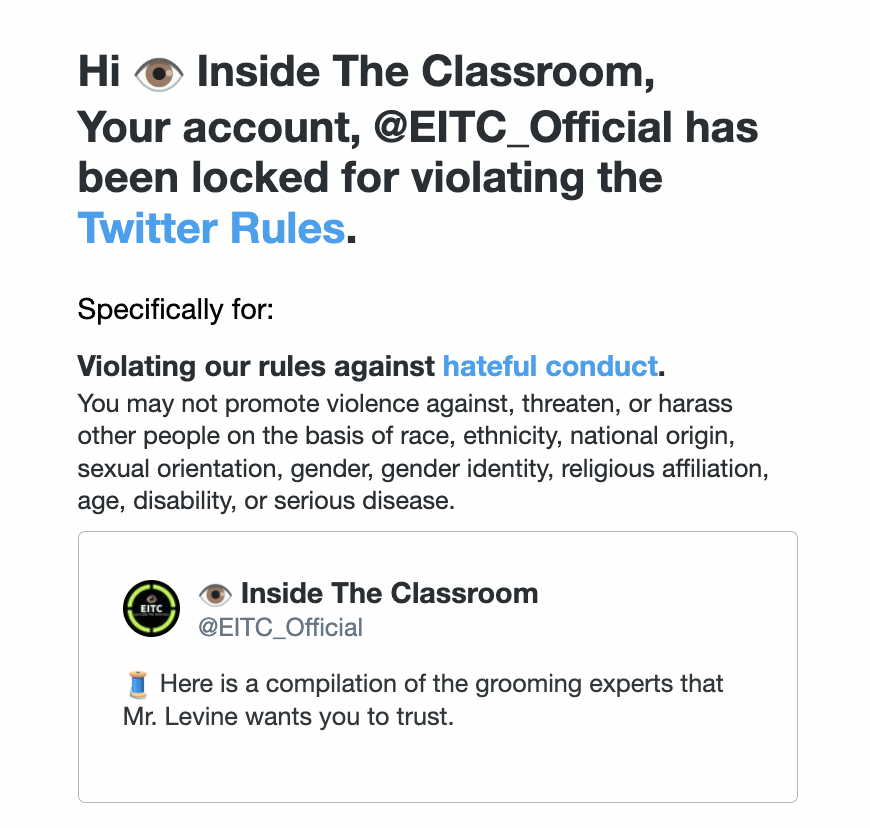 "Mr. Levine wants state rights stripped so 'the experts' can do whatever they want to your children," Inside the Classroom wrote. 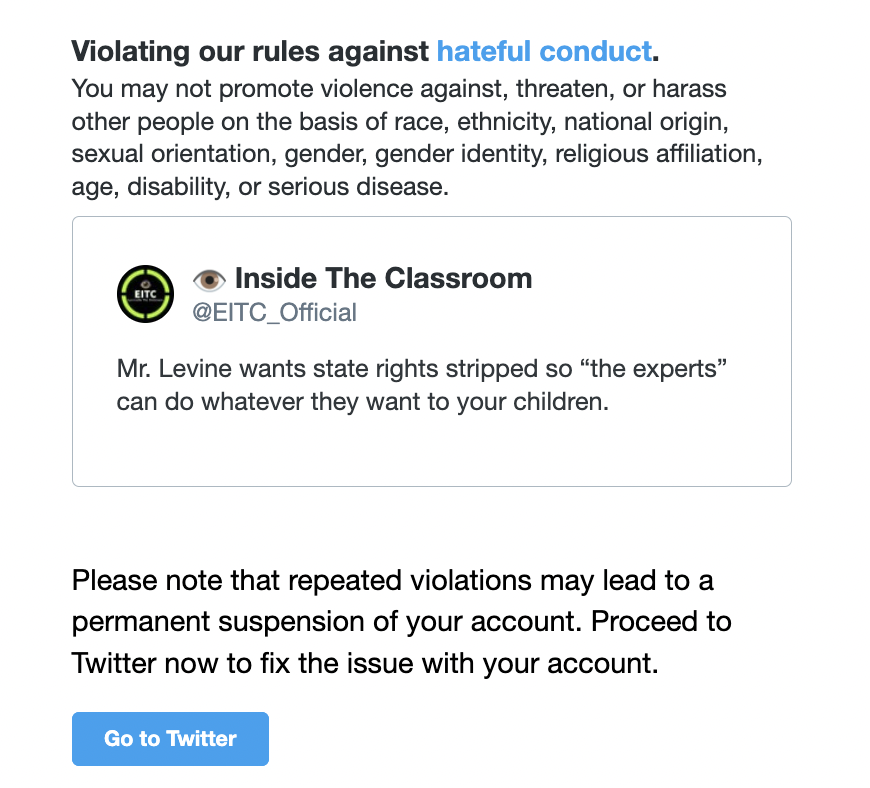 The account was reported, it turns out, by teachers that Inside the Classroom and Libs of TikTok had exposed for their behavior toward students and teachers, specifically her belief that critical race and gender theory should be taught in math classes.

Lee, a teacher in Memphis, addressed a comment that she said was giving her "shut up and teach vibes."

"We don't do that here," she said in the TikTok.

Randy Lee, under account @randypandy_ on TikTok, spoke out against "white supremacist" teachers, which was reported on by Libs of TikTok. "I am particulary talking about white, cisgender teachers, who go into schools, whether it is majority white schools or not, and use the racism that is within all of us, or the white supremacy that is within all of us, and they weild it agaisnt either students or other colleagues or coworkers. That's the issue. And that's why I said harm that has been caused, or can be caused. Because as white women, in education, we have power. Like we have the power to dismantle the systems we uphold," Lee said.

Teacher Randi Lee, who goes by @randipandy_ on Twitter, reported Inside the Classroom, and shared her joy at having the account locked after her report; "thank you to the 3 people still working at twitter," she wrote. 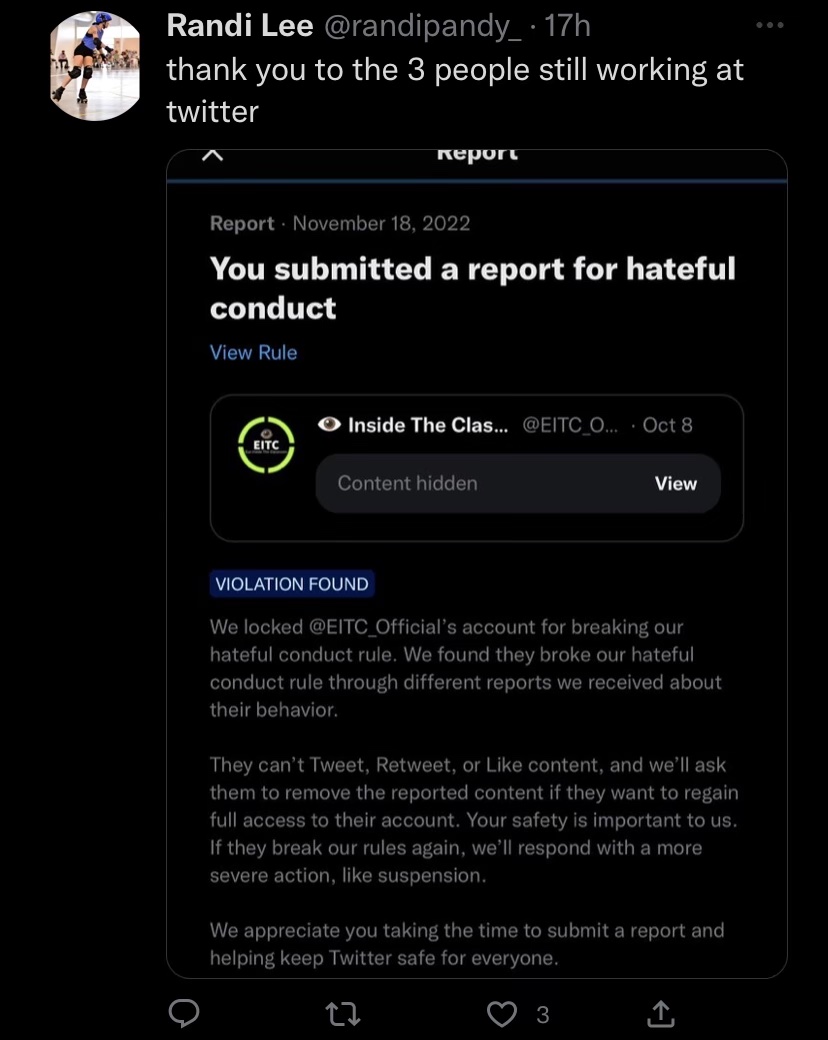 Randi Lee appears to have had others report the tweet as well, and they also were happy with the results. 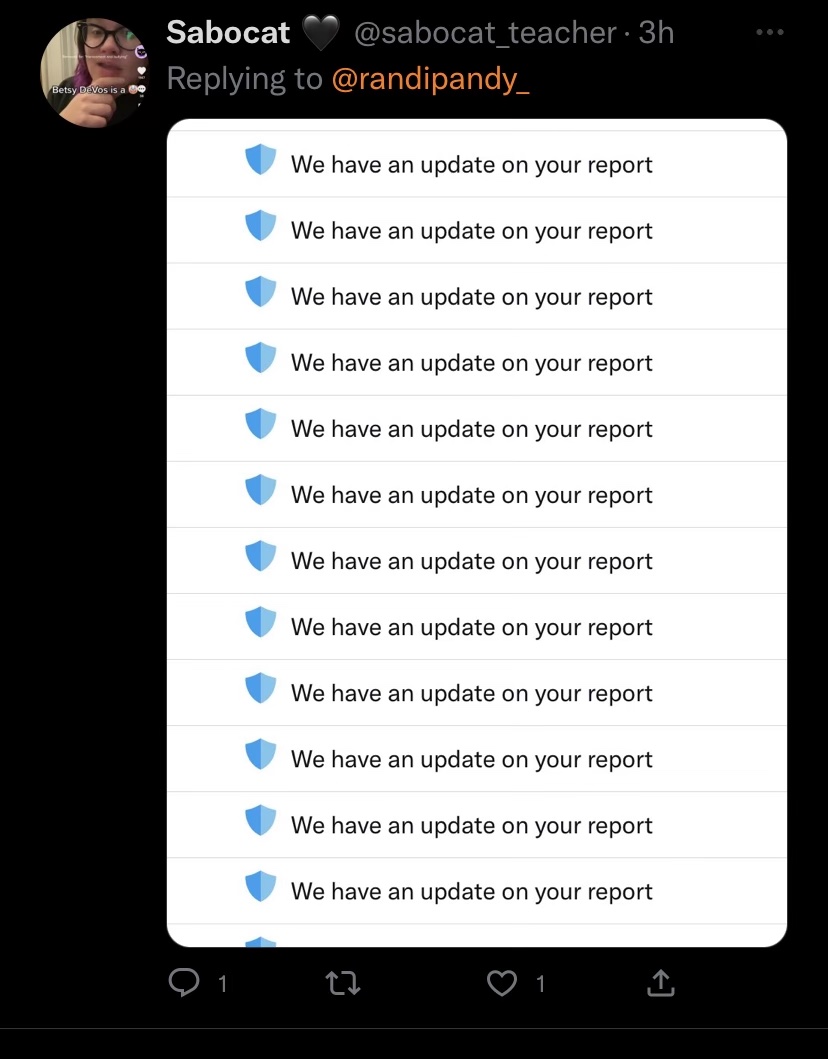 Twitter needs to make clear what the rules are for content, and if stating reality constitutes "hateful speech," that condition of discourse must be transparent. This teacher sought to ban Inside the Classroom not over calling Levine by the wrong title, but because she didn't like having been exposed for parents, students and the public to see what was going on inside her classroom.

Instead of discussing what should or should not be taught in a math class in an open and honest way, Lee chose to try to silence her critics, and Twitter, despite the new ownership, went along for the ride.