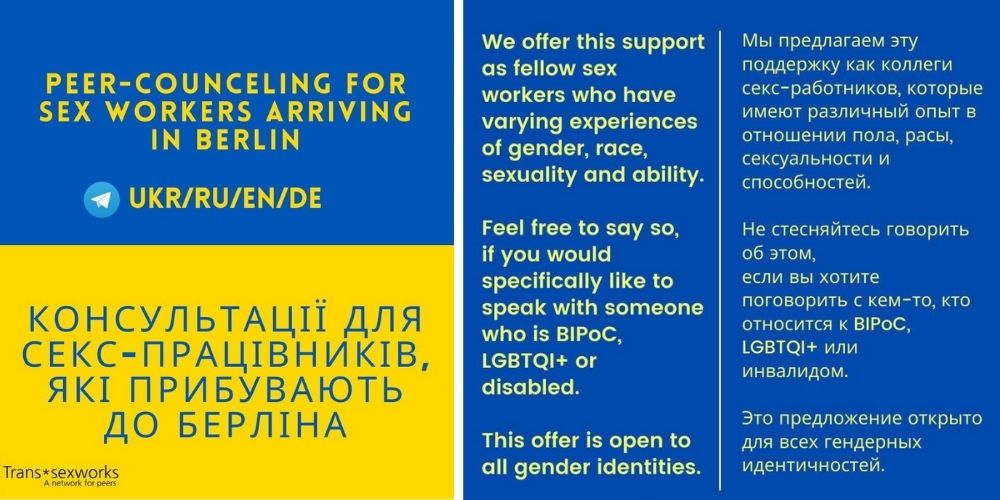 Trans*sexworks, based in Berlin, posted peer-counseling services on their Instagram page last week targeting Ukrainian women who "need support/info on how to begin sex work in Germany," according to Reduxx.

The organization, which described itself as "a peer-to-peer support structure and network for and made up of trans and non-binary sexworkers," wrote in the post that "we are now offering peer-counceling and support in Ukrainian, Russian and English for all sex-workers fleeing the war in Ukraine."

"This offer is open to all sex workers regardless genderidentity [sic] (since we do not see any other offer for cisgender sex-workers) arriving in Berlin. We can help in navigating the support systems in Berlin, helping with organising appointments with specialists and how to start work in Germany!" the post continued.

The post refers interested parties to a trans individual named Gara Teaser. "She is a Ukrainian, trans sex worker herself. We have a team of sex workers ready to support face-to-face," the organization’s post added.

According to Reduxx, Gara Teaser had been creating sadomasochistic gay pornography content under a male name until a month ago. "His last post to Twitter, a nude photo, is dated February 19," the outlet added.

Another one of the organization’s members, transgender woman Casper Tate, reportedly took part in a protest last year in which participants demanded that the government lift a ban on placed on the sex industry to prevent the spread of COVID-19, according to Reduxx. Protesters there held signs that said things like "Blow jobs are better than no jobs," and "Migration + Sex Work ? Trafficking."

Trans*sexworks has received funding from the government through the Federal Ministry for the Family, Seniors, Women and Youth, with funds set aside for "model projects," Reduxx reported.

Reduxx previously reported that Google searches for terms involving Ukrainian women in pornographic material spiked during he first week of the conflict in Eastern Europe.

According to a 2021 report from the US Department of State, human traffickers took advantage of those displaced by Russia’s occupation of Crimea.

"Traffickers reportedly kidnap women and girls from conflict-affected areas for sex and labor trafficking in Ukraine and Russia. Traffickers target internally displaced persons and subject some Ukrainians to forced labor on territory not under government control, often via kidnapping, torture, and extortion," the report states.