Union-funded anti-Conservative attack ads: Why are they so terrible?

Twenty-six years ago, the Progressive Conservative Party of Canada attacked then-Liberal leader Jean Chretien with a not-very-good attack ad during a federal election. 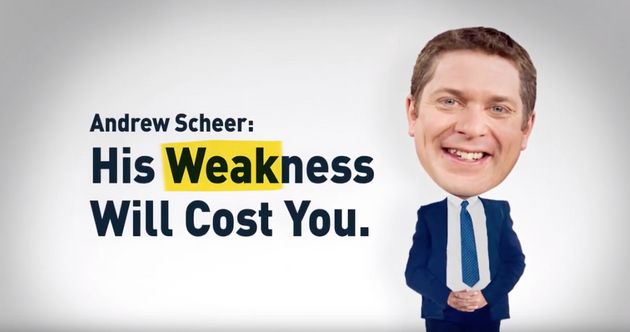 Twenty-six years ago, the Progressive Conservative Party of Canada attacked then-Liberal leader Jean Chretien with a not-very-good attack ad during a federal election.

People quite justifiably saw this not-very-good attack ad as targeting Chretien’s Bell’s Palsy, which is further evidence for the ad itself being not very good.

Canadians were faced with a clear choice: make better attack ads (that didn’t attack a politician based on their appearance, intelligence, voice, gender, etc.), or spend the next three decades arguing that attack ads shouldn’t exist while making more not-very-good attack ads that seem intentionally designed to avoid going “too far” and avoid the kind of backlash generated by the Chretien Face Ad.

You can probably guess which path we went down as a nation.

And so, when another round of not-very-good attack ads against CPC Leader Andrew Scheer surfaced during Game 6 of the NBA Finals, at a time and place when nobody wanted to think about politics, we were subjected in turn to another round of predictable articles fretting about their morality and their effect on our discourse.

As usual, nobody wanted to point out that the ads made little sense (Andrew Scheer as a bobblehead?), contained obvious errors (one featured a soldier who wasn’t wearing a Canadian uniform), and, most of all, were far too tame to properly be “attack ads.”

The plan was apparently to define Andrew Scheer because he hadn’t defined himself. To do this, the ads portrayed Scheer as a puppet of Doug Ford, which meant that the ad had to give equal time to attacking Ford and Scheer. They claimed Scheer was a “yes man to the 1%”, even though barely anybody uses the term “the 1%” anymore.

They claim Scheer is in thrall to the rich and big business, but because the people behind the ads trying really hard to avoid actually offending anybody, they also don’t define who “the rich” and “big business” actually are.

I’m not arguing that the Conservative attack ad against progressive parties are much better. They were the ones who came up with the Chretien Face Ad, and they had their own eye-rolling ads during the game, bringing back the actors from the ineffective “Job Interview” anti-Trudeau ads from 2015. And earlier this year, they got in trouble when they created a parody of Heritage Canada’s “Heritage Minutes” to attack Trudeau’s numerous ethics breaches.

But UNIFOR, the powerful collection of private-sector unions who support the anti-Scheer ads, count among their number workers from Canada’s journalist, print media, television, and online media sectors. They endorsed these ads. They represent Canada’s creative types. And these ads are anything but creative.

Not only that, but UNIFOR boss Jerry Dias pledged to become Scheer’s worst nightmare. How does endorsing these weaksauce ads accomplish that goal?
And it’s not as though Canada’s left had a great track record when it comes to attack ads. Look at this bizarre short film conceived before the 2014 Ontario election attacking Tim Hudak.

How about this bit of what-the-hell from the 2010 Winnipeg Mayoral election, which contains the line, “Sam Katz. He kicks children in the face. Nice.”?

Or my personal favourite—Olivia Chow’s campaign song from the 2014 mayoral election:

They don’t bother to make their ads clever, funny, or memorable because they’ve never had to explain why they don’t like conservatives in a way that resonates with people for whom that hatred isn’t obvious.