Al-Yamani is alleged by the Canadian government to be linked to the “Popular Front for the Liberation of Palestine.” The group has been listed as a terrorist organization by Canada. 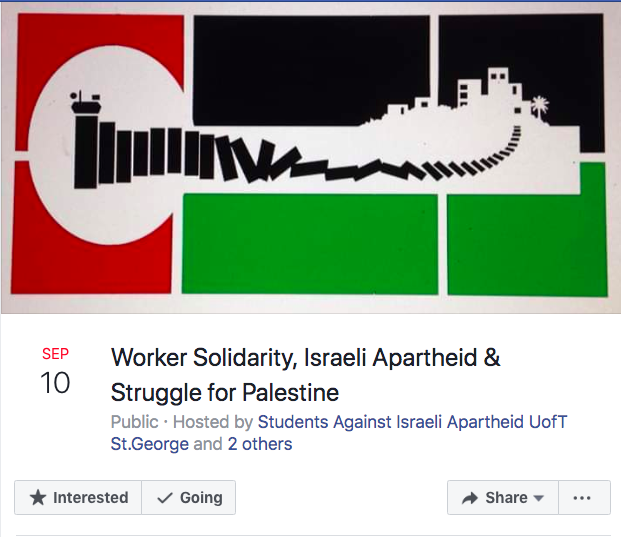 Update:  The University of St. Michaels College in The University of Toronto has published a clarification on their website noting that the event will not be held there, and no booking was made with the organizations planning the event. The event page itself has posted the address of a CUPE office as the location going forward.

University of Toronto’s “Boycott Divest Sanction Israel” movement has invited an unusual personality to speak on its campus.

The event is titled “Worker Solidarity, Israeli Apartheid & Struggle for Palestine.” It is hosted by the Students Against Israeli Apartheid U of T St.George, CUPE 3902 Racialised Workers’ Caucus, and U of T Divest.

The event brings together four speakers. Imad Temiza, Rory Gill, and Raúl Burbano. However, the one most in contention is Issam al-Yamani.

The event description describes al-Yamani as a “Palestinian activist/trade unionist on the Palestinian workers’ movement.” However, several members of Jewish society are raising concerns.

Al-Yamani is alleged by the Canadian government to be linked to the “Popular Front for the Liberation of Palestine.” The group has been listed as a terrorist organization by Canada.

Al-Yamani was ordered to be deported from Canada in 2005. However, he is still present on Canadian soil.

Ilan Orzy, director of advocacy and issues management for Hillel Ontario, said, “We are deeply concerned about his presence on campus, and obviously very perturbed by the idea that a person with ties to a terrorist organization would be even invited to campus. And beyond that, we have engaged in conversations with the University of Toronto’s administration and have made them aware of our concerns.”

Orzy also said that campus security would be increasing their presence near the Hillel building on the night of the event, according to CJNews.

A Global News investigation in 2014 stated that “a 2014 Canada Border Services Agency (CBSA) report alleged (al-Yamani) was a ‘danger to the security of Canada’ who formerly led a terrorist cell that conducted a bombing,”

Friends of Simon Wiesenthal Center issued a statement demanding the barring of al-Yamani from the event.

The PFLP is an organization that, in the 20th century, executed numerous hijackings and, in the 21st century, has claimed responsibility for bombings and shootings on Israeli and Palestinian soil.

“When Norman Finkelstein spoke at the University of Toronto last year, our former Executive Director called on administrators to denounce his comments, rather than demand that his invitation be rescinded,” he said.

“However, when it comes to Issam Al-Yamani, there can be no other option but to cancel his upcoming campus talk—not as a result of his anti-Israel advocacy, but to ensure the safety of U of T students,” he added.