She wanted to "leave room for people to consider how this has impacted their lives... This so-called new normal is not a given; at least we don't need to take it." 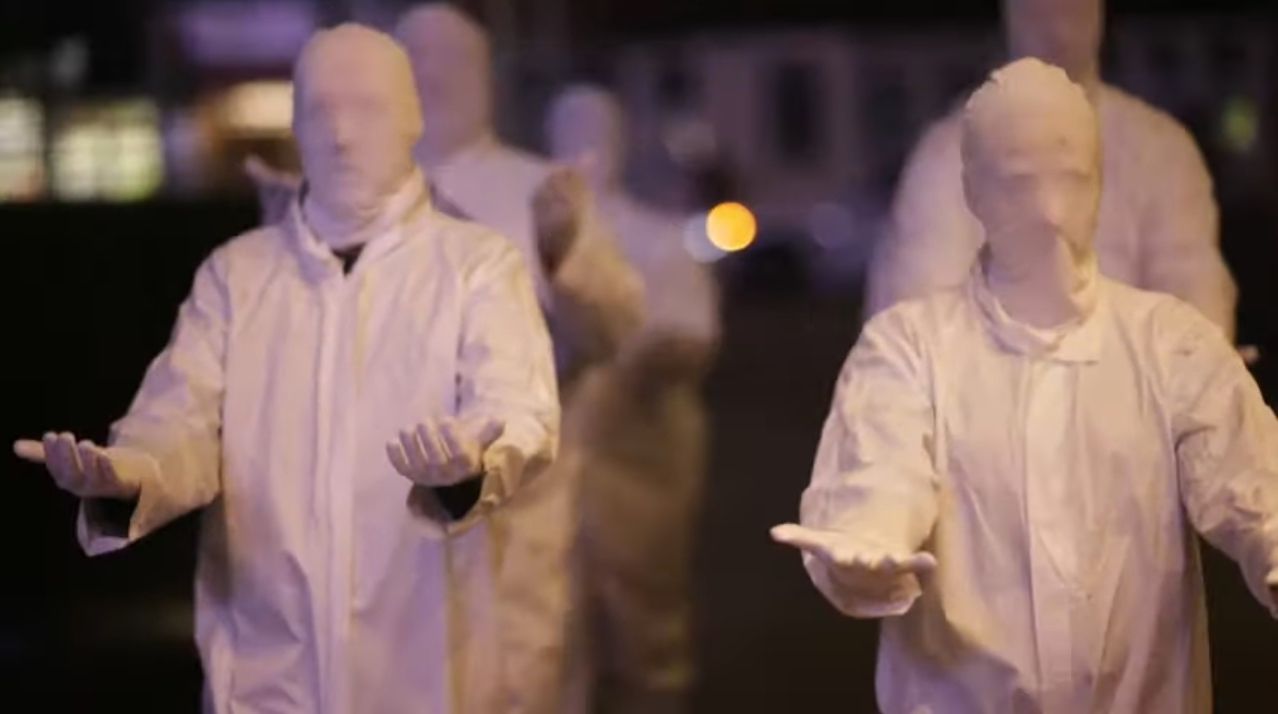 We have entered the second year of restrictions and prohibitions, the second year of mandatory masking, lockdowns, curfews. We are faced with realities like vaccine passports, travel limitations for those who haven't partaken of vaccination, and as we sit and wait for our freedoms to be returned to us, it's hard not to feel that we shouldn't have given them up in the first place.

That's how Ooana Trien felt, and why she made a short film to show what we are allowing ourselves, and our society, to be turned into simply for the sake of compliance.

Shot in April in New York City's theater district, the film normally would have been hard to make. There would have been too many people around. But during the 12th month of "two weeks to flatten the curve," there were hardly any people about other than a few homeless and a street church, the theaters were all closed, and the film crew basically had the area to themselves.

Trien, a theater artist trained at NYU's Tisch from the Experimental Theater Wing and the Classical Studio, told us about her inspiration for the project. "I was really moved by a performance piece that was created by Swiss artists," she said. "I also was really surprised, and very happy, to see the reaction from people across the world to it. I remember someone said 'I miss art!' As their reaction. It felt like that was the moment when it's our job, as artists to jump into the tollbooth and throw on our capes so to speak." She wanted to make something that would resonate with American audiences.

The composition includes phrases that have become familiar to us over the past year, like "stay home, save lives," "keep your distance," "we're all in this together," "protect the essential workers," and adds more absurd ones, such as "conformity costs you nothing," "protect your loved ones, leave them alone," "it's your fault if you get sick," and perhaps most poignantly, "community is contagion."

"I mean, with the vacuum that the last year has left for artistic expression and experience, how can we not?" Trien said. "I decided that I wanted to create something which reflected not only the warning that their piece conveyed, but also offered an opportunity for people to look at the realities of the last year in the United States and especially here in NYC."

"It was inspired by Meyerhold and his concept of biomechanics," she said. "Meyerhold was tortured and murdered at the hands of Stalin. It's a reminder of the absolute tragedy that has been done to artists in the name of politics." Theater in New York has been shut down since the early days of the pandemic. It has not only been the shuttering of an industry, but the silencing of theater artists.

A progressive left that has told us that silence is violence when it is in regard to social justice has just as quickly told us that silence is necessary when it comes to masking, locking down, and vaccination. Both things can't be true. What has been enacted against the free people's of western nations, the denials of freedoms, of adults' personal responsibility to assess their own risks, has been met, primarily, with compliance.

When protests have been mounted, they have been decried by officials, and by those who have been convinced, fully, that compliance is mandatory as a means to eradicate a disease. But questions have been raised by brave individuals who wonder what else, what other crises or impending doom will be used to keep the populace in their place?

It could be anything, it could be climate alarmism, or social justice concerns, it could simply be fears over the variants of the already present disease that are used by governments and corporations to create further social pressure for people to do as they're told, for their own good.

Specifically, Trien said, she wanted to "leave room for people to consider how this has impacted their lives and hopefully ask, what is it that they want and value. This so-called new normal is not a given; at least we don't need to take it."

"I close the video with a quote from Eugene Ionesco," Trien said. "He was an absurdist artist, intellectual and essayist who was born in Romania and lived in France during the rise and tragedies of Stalin, Hitler and Mao. He also wrote, 'I've always been suspicious of collective truths.' I share that in common with him."