While giving the commencement address at the Coast Guard Academy, Biden insulted the class with a dig saying, "You are a really dull class," and later quoted the founding father of communism in China, Mao Zedong. 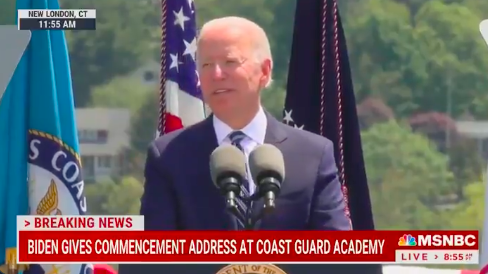 While giving the commencement address at the Coast Guard Academy, Biden insulted the class with a dig saying, "You are a really dull class," and later quoted the founding father of communism in China, Mao Zedong.

Biden took a shot at the graduates by saying "You are a really dull class” during his commencement address at the Coast Guard Academy. Biden attempted to make a joke at the Navy's expense and when no one laughed Biden appeared to get frustrated saying to the class, "c'mon man."

Biden said to the class, "The coast guard is 'The hard nucleus that forms around the Navy in times of war.'" The joke was met by crickets to which Biden snapped and said, "You are a really dull class. Like c'mon man is the sun getting to you? I would think you have an opportunity when I say that about the Navy to clap." The crowd quickly responded with a forced round of applause and a few chuckles.

Biden also quoted Chinese Communist dictator Mao Zedong in reference to women in the Coast Guard Academy. Biden said: "There's a saying we use in a different context, it's a Chinese saying, it says, 'Women hold up half the world.' He goes on to say "It's an absolutely stupid position not to make sure they represent at least half of what we do."

Biden has a history of similar comments. In 2016, while addressing troops in Al-Dharfra Air Base Biden told to troops "clap for that you stupid bastards." Biden seemed upset and continued to call the servicemen and women "a dull bunch" and said they "must be slow." Biden was Vice President at the time and was visiting the airbase in the United Arab Emirates.