"You are such a pain in the neck," Biden responded, "but I'm going to answer your question because we've known each other for so long." 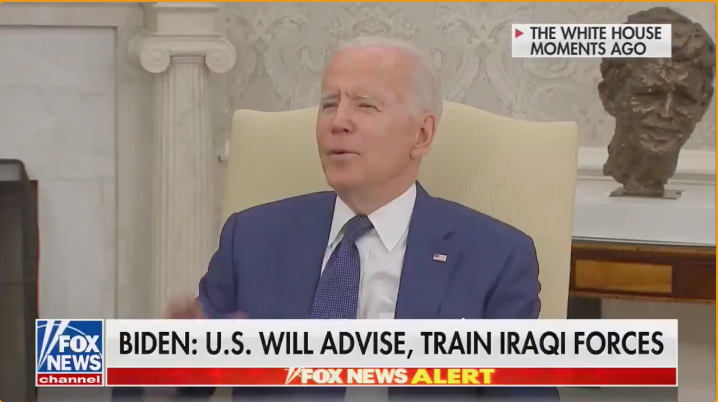 After the the Department of Veterans Affairs declared on Monday that COVID-19 vaccinations will now be mandatory for its healthcare workers, a first for a federal government agency, President Joe Biden was asked by a reporter about that policy.

It was while he was hosting Iraqi Prime Minister Mustafa Al-Kadhimi in the Oval Office, during which he took questions from the press pool. He anticipated questions about Iraq, and the American relationship with that war-torn nation.

However, as the press was ushered from the room, Kelly O'Donnell of NBC tried to get in one last question, not about Iraq, but about the VFA's new vaccine requirement policy.

"Mr. President," O'Donnell, "Veterans Affairs is going to have a mandate—"

"Yes, Veterans Affairs is in fact going to require that all docs working in that [sic] facilities are going to have to be vaccinated," he said.

Aides then pushed press from the room.

That policy was announced by Veterans Affairs Secretary Dennis McDonough announcement on Monday, and those who are required to get the shot have eight weeks in which to do so.

McDonough said in a statement that "We're mandating vaccines for Title 38 employees because it's the best way to keep veterans safe, especially as the Delta variant spreads across the country."

"Whenever a veteran or a VA employee sets foot in a VA facility, they deserve to know that we have done everything in our power to protect them from COVID-19," he continued. "With this mandate, we can once again make—and keep—that fundamental promise."

The reasoning for McDonough was that "In recent weeks,  VA has lost four employees to COVID-19—all of whom were unvaccinated. At least three of those employees died because of the increasingly prevalent Delta variant."