Keisha King said critical race theory "is not teaching the truth, unless you believe that whites are better than blacks." 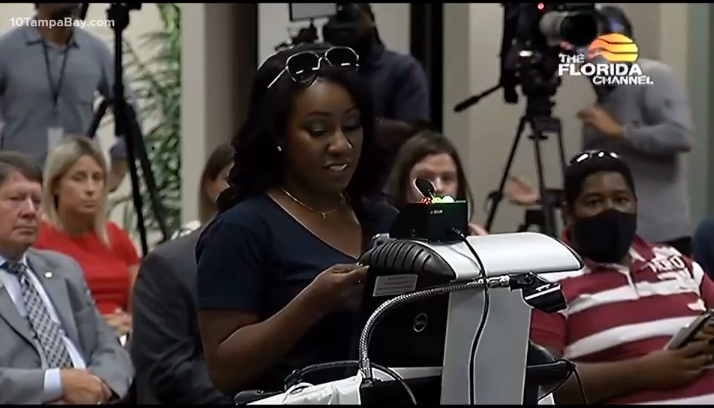 A mother in Florida, which has banned the implementation of critical race theory in classrooms and in curriculum, spoke out against the ideology. Her name is Keisha King, and she gave her testimony to the State Board of Education.

"Just coming off of May 31, marking the 100 years of the Tulsa riots, it is sad that we are even contemplating something like critical race theory, that children will be separated by their skin color and deemed permanently oppressors or oppressed in 2021.

"That is not teaching the truth, unless you believe that whites are better than blacks. I have personally heard teachers teaching CRT and we have had an assembly shut down because a Duvall County public schools system consultant thought it would be a great idea to separate students by race.

"This is unacceptable. CRT is not racial sensitivity or simply teaching unfavorable American history or teaching Jim Crow history. CRT is deeper and more dangerous than that. CRT, in it's outworking today, is a teaching that there is a hierarchy in society where white, male, heterosexual, able-bodied people are deemed the oppressor and anyone else outside of that status is oppressed," she said.

"That's why we see corporations like Coca-Cola asking their employees to be less white, which is ridiculous," she said.

"I don't know about you, but telling my child or any child that they are in a permanent oppressed status in America because they are black is racist, and saying that white people are automatically above me, my children or any child is racist as well."

"This is not something that we can stand for in our country," she said.

"And don't take it from me, look at the writers of these types of publications, our ancestors, white, black, and others hung, bled, and died right alongside each other to push America towards that more perfect union. If this continues, we will look back and be responsible for the dismantling of the greatest country in the world by reverting to teaching hate and that race is a determining factor on where your destiny lies."

Moms for Liberty launched on January 1, founded by Tina Descovich and Tiffany Justice. Descovich told The Post Millennial that she and Justice were both former school board members in Florida through November 2020. She said they sat through the school closures, and saw that parents didn't know how to advocate for for their kids, both in terms of curriculum and getting kids back into the classroom, with their faces free.

"School boards weren't listening," she said, "and weren't representing parents." Descovich and Justice "knew that they could step up and lead."

When asked if she thought this year had been a wake-up call for parents politically, and she said that it was, but added "I hate to call it political, it's personal." Descovich said that parents have "seen what's being taught, and what the balance of power is."

"Parents are waking up for the first time in decades," she said. "We've been sending our kids off to school every morning, thinking they're getting a quality education. COVID has pulled back the 'educurtain' and it's not pretty. That's why these groups are rising up."

The measure to ban critical race theory in schools had the full backing of Florida Governor Ron DeSantis who has previously talked about how a measure like this is necessary to protect children from teachers or school boards.

"Some of this stuff is, I think, really toxic. I think it's going to cause a lot of divisions. I think it'll cause people to think of themselves more as a member of particular race based on skin color, rather than based on the content of their character and based on their hard work and what they’re trying to accomplish in life," said DeSantis.