The CDC's Dr. Rochelle Walensky had said that "schools should be that last thing to close and the first thing to open," but she now has walked back that guidance after talking to local educators about their feelings. 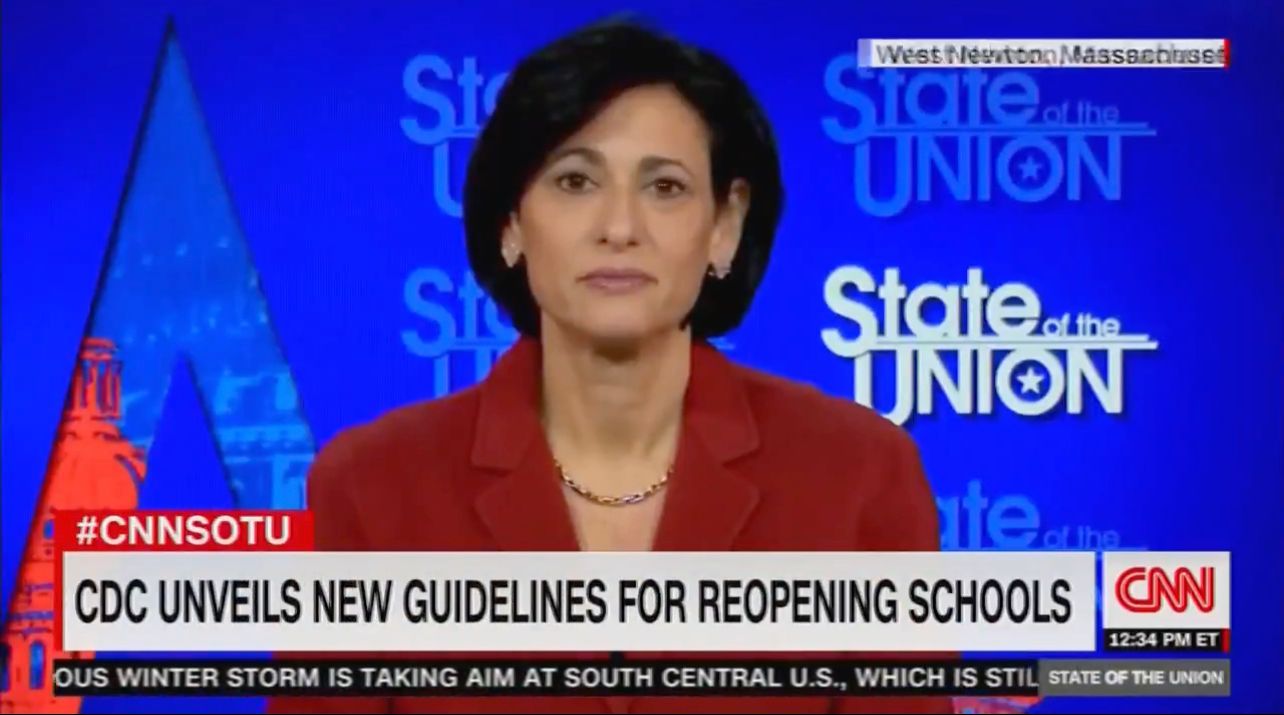 The CDC's Dr. Rochelle Walensky had said that "schools should be that last thing to close and the first thing to open," but she now has walked back that guidance after talking to local educators about their feelings.

The Centers for Disease Control admitted in a recent release that part of their consideration on school reopening was not science, but the opinions of "stakeholders."

Speaking to CNN's Jake Tapper on Sunday, Walensky also touted the American Rescue Plan as necessary for schools to reopen. The Biden administration has been pushing hard to get it through congress. Walensky said that "we need to do the work to get all of these mitigation strategies up and running in American schools. The American Rescue Plan has resources, $130 billion of resources to facilitate and help schools get there. And that's really why we're pushing for the rescue plan so that we can facilitate those schools, getting all of those mitigation measure so that they can open safely."

Walensky said in response to a question as to whether or not all American schoolchildren should be back in classrooms before the end of this school year, "really what we have said in our guidance is the amount of classroom activity depends on the amount of spread in the community."

Walensky said that "we would advocate for more kids in school as our community spread comes down."

CDC guidelines released on Friday stated that elementary schools can be open no matter what the level of community COVID transmission is, so long as they engage in face masking, social distancing, and take active hygiene measures.

Middle and high schools, the CDC said, can be open except where community COVID transmission high, meaning a 10 percent positive COVID test rate over a period of seven days, or where there are 100 cases for every 100,000 people over the same period of time. The CDC recommended weekly testing of students and staff for these grade levels, and that school attendance reduction, where kids alternate who learns in class and who learns remotely.

Walensky now advocates for "hybrid elementary school," and virtual learning for high schools unless schools can maintain "a strict six feet" of physical distancing between students.

Tapper asked if there were any scientific reasons why students should not return to the classroom. Walensky cited "mask-breaching" as a problem, and though she said that there was very little spread in schools, "we don't want to bring community disease into the classroom."

"We really need to do the hard work to make sure that there's universal masking, there's strict six feet of distancing between, that there's cohorting or podding so that there's restriction of disease if it were to be transmitted, and y'know all of the contact tracing and whatnot that needs to be done, and all of that is really hard to put together."

Tapper pressed her on the science, noting that many experts have said that schools must be open and that the psychological, emotional, and educational loss to students has been extreme. Increased suicides, depression, declines in mental health, and an overall decline in actual learning have plagued students since school closures began.

"There are numerous research studies that have demonstrated that with universal masking and six feet of distancing and y'know dedensification of the classroom, that it's possible to get schools back, safely, with all of that happening."

Florida schools have been open since August and they are doing great. Governor Ron De Santis said every child has the right to an education. There have not been mass outbreaks as a result of school transmission. In fact, more than half the states in the US, including the District of Columbia, have worse case rates, death rates, and hospitalization rates than Florida, and the kids are in class. In fact, Florida eschewed the CDC guidelines, because what they are already doing is working.

Walensky at first said that vaccination of teachers should not be a pre-requisite for schools to open, and advised that schools should get back to in-person learning. But it appears that the Biden administration encouraged the CDC to change course and reversed that determination.

White House Press Secretary Jen Psaki said the administration was prepared to follow the science. If science is the ultimate arbiter of school reopening, then why is the CDC talking to people who are not medical experts and have no health background as to how and when schools should reopen? Again it appears to be the teachers unions, and not science, that are making these decisions.

In a Friday press briefing, the CDC admitted that it was not only science that they used as their guide, but "...an understanding of the lived experiences, challenges, and perspectives, of teachers and school staff, parents, and students."

Walensky told press "I have stressed the importance of bringing back K through 12 students safely to in-person learning, since we know the benefits the classroom setting and the support services delivered by schools provide to our students. Especially, those from low-resources, racial and ethnic-minority communities, and children with disabilities."

But then, instead of discussed the low transmission rates in schools, she said "I recognize that the decision, on when and how to being in-person learning is one that must be based on a thorough review of what the science tells us works and an understanding of the lived experiences, challenges, and perspectives, of teachers and school staff, parents, and students."

Walensky said that "We have conducted an in-depth review of the available science and evidence base to guide our recommendations, and we have also engaged with many education and public-health partners, to hear firsthand from parents and teachers, directly, about their experiences and concerns."

She then said that "these sessions were so informative, and direct changes to the guidance were made as a result of them." Walensky admitted that, in this regard, science and medical expertise were not the ultimate guide in school reopening, instead, the feelings of people who fear COVID more than the educational bankrupting of our nation's youth were more essential in their determination.

The CDC guidelines, that were released on Friday, failed to urge schools to reopen, despite Walensky's early indications that school reopening was a priority. Instead, they recommended plans that are already in place in many of the nation's largest school districts where consistent, in-person learning is still a thing of fantasy.

The Biden administration has touted their $1.9 trillion American Rescue Plan, which contains billions of dollars for school retrofits and additional staff, as the only means by which schools can safely reopen. The message to America's parents? If you want kids in school, pay up.