"I think it has not been good for the former president," Stewart said. "I think we've made a case that he was responsible for 9/11." 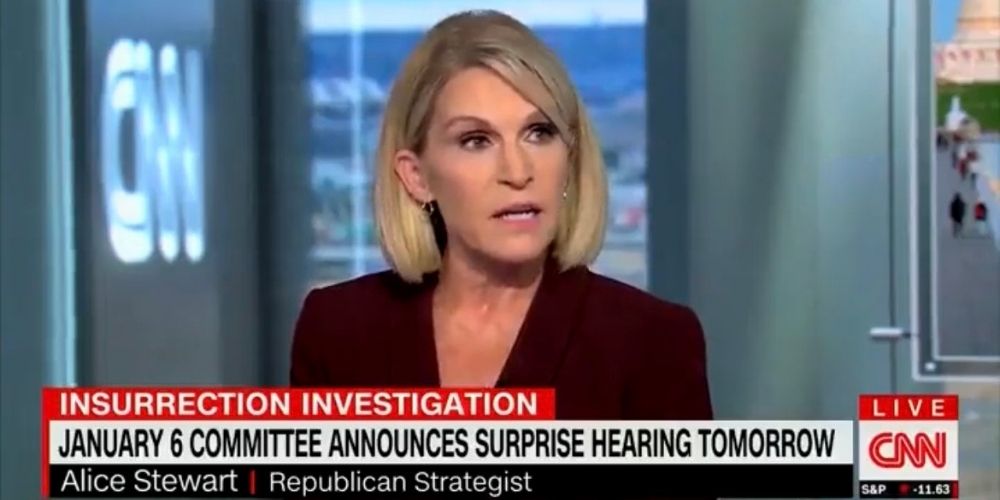 A CNN guest made an unfortunate gaffe on Monday while discussing former President Donald Trump and the Jan. 6 riot at the US Capitol.

Alice Stewart, a Republican Strategist, appeared on the network to discuss the public hearings of the Jan. 6 House Select Committee and blamed Donald Trump for the 9/11 terror attacks.

"I think it has not been good for the former president," Stewart said. "I think we've made a case that he was responsible for 9/11."

Stewart corrected herself and said, "Or January 6."

"He should not have been pushing the election lies," she added.

Since the riot at the US Capitol following President Trump's Stop the Steal Rally, Democrat politicians and commentators, including mainstream media, have compared the riot to the horrific events that occurred on 9/11, with some saying that Jan. 6 was on par with the 2001 terror attacks as well as the attack on Pearl Harbor, which brought the US into World War II.

On the one-year anniversary of the Capitol riot, Vice President Kamala Harris gave a speech on the steps of the US Capitol and said, "Certain dates echo throughout history, including dates that instantly remind all who have lived through them, where they were and what they were doing when our democracy came under assault."

The 9/11 terrorist attacks resulted in the death of nearly 3,000 people, and the attack on Pearl Harbor killed 2,403 sailors, soldiers, and civilians. To compare, the Jan. 6 riot was a failed attempt to stop the certification of the 2020 Presidential Election.