A drag queen invited kids to come on stage and twerk before the crowd during Ottawa Pride. 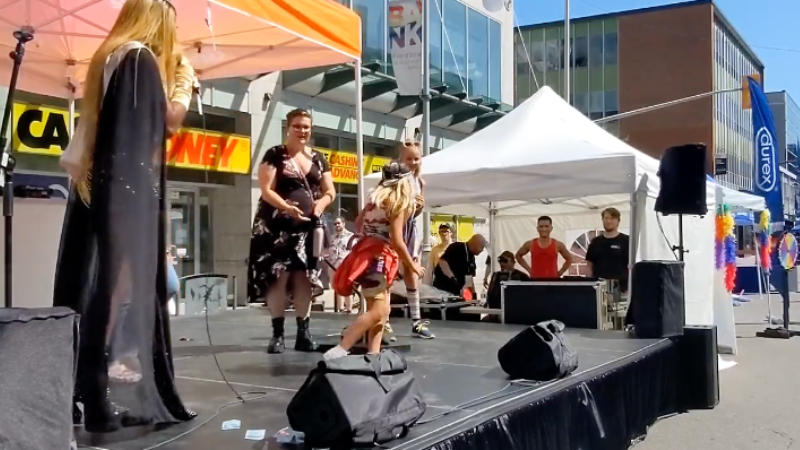 A video has emerged on Twitter of children being encouraged to twerk on stage at an Ottawa Pride event.

A Canadian independent journalist who goes by the name The Pleb captured the footage during Ottawa's Pride week celebrations and posted it Twitter. It has since received increased attention after it was shared by Libs of TikTok.

The video, which was filmed on a bright and sunny street in Ottawa's downtown core, shows four people on stage, two adults and two children, taking turns to twerk as a drag queen encourages them and a crowd of people cheers them on.

The older of the two children appears to be a girl of around twelve or thirteen, while the younger looks to be perhaps seven or eight. The parents of the children are not visible in the video.

While the response on Twitter was one largely of disgust and outrage, not everyone sees an issue with this form of family entertainment, with one Twitter user asking: "Why aren't those kids crying if they're so upset? Why can't kids dance?"

The Oxford dictionary definition of twerking is to "dance to popular music in a sexually provocative manner involving thrusting hip movements and a low, squatting stance."

After capturing the spectacle on film, The Pleb came across Ottawa's nonbinary mayoral candidate Catherine McKenney, who had a stall set up at the event. He approached McKenney to inquire about what the mayoral candidate thought of children being encouraged to dance in such a provocative manner.

"Why were kids allowed twerking on the stage over there with the drag queen?" He asks.

When McKenney shows no sign of being aware of what he's referring to, the journalist explains: "I saw literally children on the stage twerking, and I have it on video. It's on Twitter. Seven and eight year olds on stage twerking. Is that okay with you?"

McKenney then turns from the camera and walks away, declining to comment.

The Capital Pride Festival ran from August 21 to August 28 and on its website describes itself as "an opportunity for our community to connect, celebrate, educate, and advocate" with programming including  "a series of public art installations, new family and youth programming [and] human rights-centered events."