Burns was on CNN to promote his new documentary film about the Holocaust when he made the comparison between Florida Governor Ron DeSantis and Hitler. 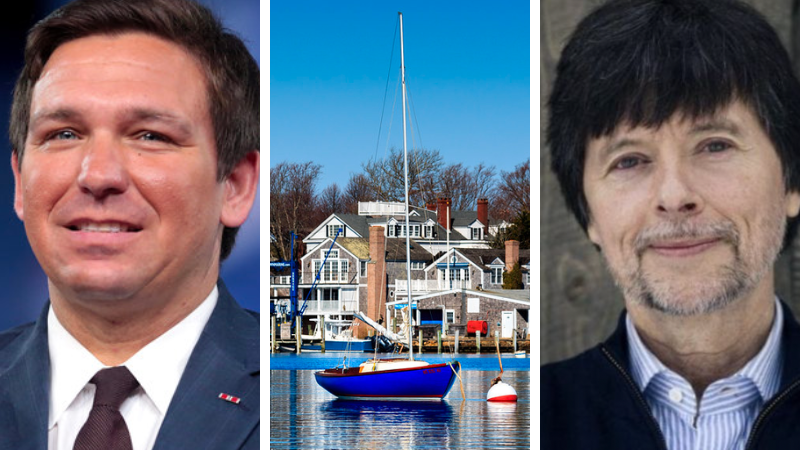 Joshua Young Youngsville North Carolina
Sep 16, 2022 minute read
ADVERTISEMENT
ADVERTISEMENT
Ken Burns appeared on CNN's "New Day" on Thursday to promote his new PBS Documentary, "The US and the Holocaust," and told host John Berman that Ron DeSantis moving illegal immigrants to Martha's Vineyard is equivalent to the actions of Nazis in Germany and the murder of 6 million Jews across Europe during Holocaust.

"This is coming straight out of the authoritarian playbook, this is what’s so disturbing about DeSantis, is to use human beings, to weaponize human beings for a political purpose," Burns said, according to the New York Post.

When President Joe Biden took office, he dramatically loosened restrictions along the southern border. This created a humanitarian crisis that has lead to historic drug and human trafficking. Biden's border crisis has seen a record-high number of illegal immigrants pouring into the United States with 1,659,206 illegal immigrants crossing in 2021 and there have already been more than two million encounters in the 2022 fiscal year.

Burns agreed with host Berman as he said that there are "some of the same themes" between DeSantis giving travel amenities to illegal immigrants as the Holocaust, which saw the Nazi's capture and trap Jews in concentration camps and then mercilessly torture, experiment on, and slaughter them among other human atrocities.

69-year-old Burns is based in Brooklyn and is a lifelong donor to the Democratic party. DeSantis flew 50 illegal aliens to Martha's Vineyard essentially to make the point that border towns and states are struggling under the massive influx of border crosses who need services, shelter, and help of all kinds. Residents of Martha's Vineyard, in the sanctuary state of Massachusetts, didn't like it, and provided shelter to those 50 people before busing them off the island.

In 2021 the Left pilloried Burns for being a white man making documentaries about minorities. In 2021, scathing critiques popped up such as "Ken Burns Responds to Criticism Around Diversity in Documentary and PBS' Reliance on the Director" from the Hollywood Reporter, "Ken Burns says he agrees PBS can 'do better' on diversity, representation" from NBC, and "Nearly 140 filmmakers blast PBS over diversity and too much Ken Burns" from The Hill.

The 2021 avalanche of criticism was not new, there had been a slow burn over time going back to his 1990 documentary on the Civil War. Many of the criticisms are aggregated at the Journal of the Civil War Era but they focus most on how the work had multiple historical errors while striving for simplicity in narrative.

A 2017 Chronicle piece summed up the problem with Ken Burns by writing that "He's a simplifier."

As Burns sat next to his "The US and the Holocaust" co-director Lynn Novick he said, "What we find in our all films is that the themes that we engage in the past are present today. And so, when you look at the story that we’re telling of the US and the Holocaust, you understand that the time to save a democracy is before it’s lost. We promise you."

Burns' understanding of Democracy mirrors the sophisms of Leftism, and in the wake of his near cancellation, he's embraced the most toxic of their myths, that America is inherently evil, as evidenced by his Op-Ed summarizing the thesis of his new documentary, "Op-Ed: Americans fueled the rise of Nazis and the Holocaust. Will we learn from that shameful chapter?"

The American involvement in World War II historically turned the tide of the war and the US was overwhelmingly responsible for the defeat of the Nazis and liberation of everyone in concerntration camps.
ADVERTISEMENT
ADVERTISEMENT
desantis mv burns