The officers let her know that she is under arrest "in relation to incitement." "What on Earth? Excuse me, what on Earth?" Buhler asks, shocked, saying that she has "an ultrasound in an hour." 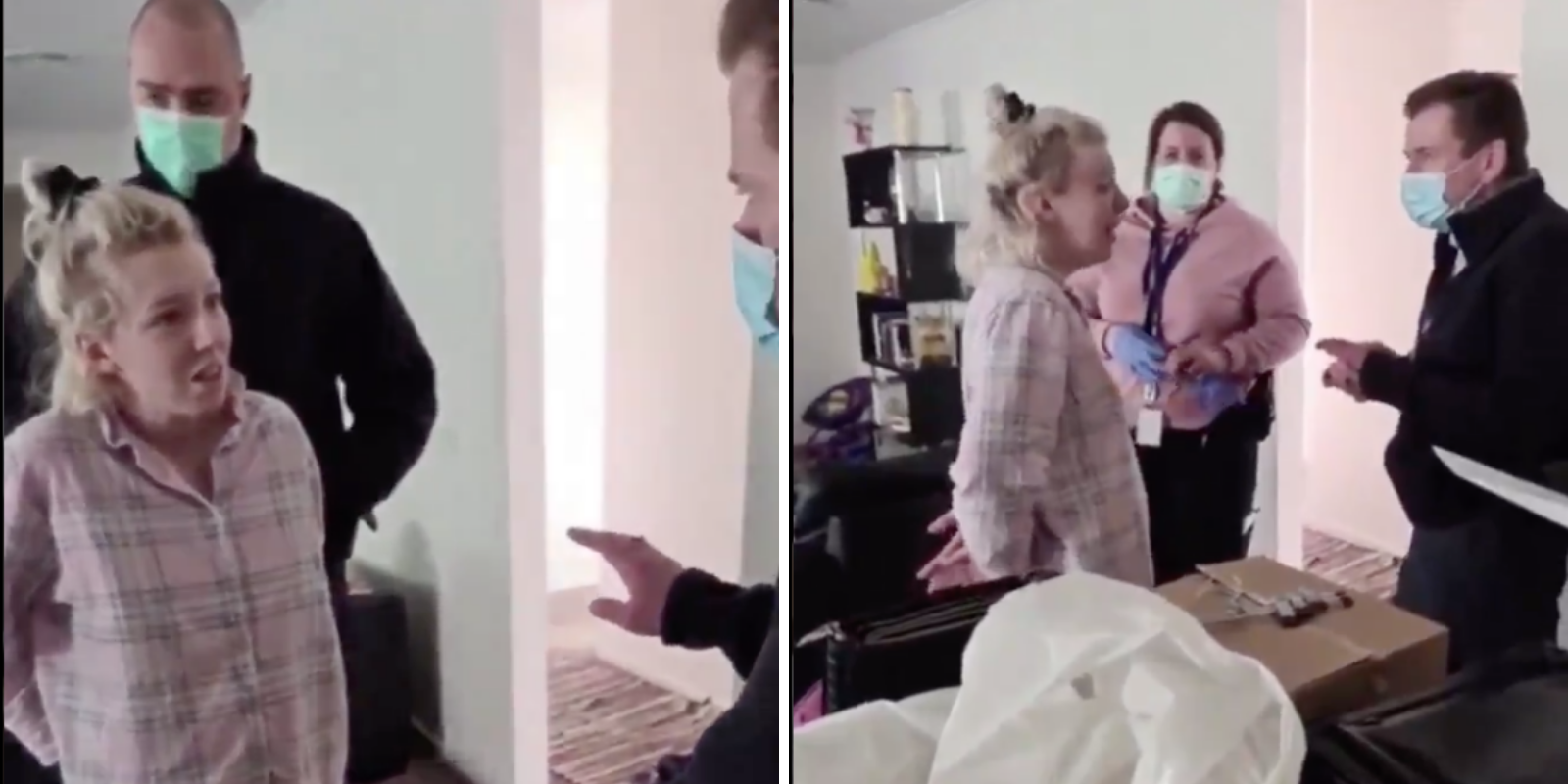 A pregnant Australian mother was arrested in her home, in her pajamas, in front of her two kids, for a Facebook post against the perpetual lockdown. Zoe Buhler, 28, who goes by Zoe Lee on Facebook, can be seen in her pajamas as officer enter her home and restrain her, as her children look on.

As the officers enter her home, she says "You can show me your search warrant before you go through my house."

The officers let her know that she is under arrest "in relation to incitement."

"What on Earth? Excuse me, what on Earth?" Buhler asks, shocked, saying that she has "an ultrasound in an hour."

The officers explain, as they handcuff her and read her rights to her, that she's being arrested for incitement over a Facebook post about a protest to end the lockdown.

"And I wasn't breaking any laws by doing that," Buhler says.

"You are actually," the arresting officer says, "And that's why I'm arresting you."

The man of the house suggests that the officers should just ask her to take the post down, and Buhler says that she would be "happy to delete the post," adding that the situation was "ridiculous."

He goes on to suggest that she can also not do the event, since it hasn't even happened as yet. But the officer instead continues the arrest, stating "we believe you are committed to it."

The officers go on to state their intention to seize all computers and mobile devices in the home as Buhler breaks down in tears.

"Any device in this house, we're taking," the officers say.

Buhler had allegedly organized a protest and posted about it on Facebook. Sydney Watson shared the details.

The event was called Freedom Day Ballarat, and was to be held on Saturday at 11 am in Ballarat, Victoria. The post stated that the protest was intended to be peaceful, to follow all social distancing measures "so we don't get arrested."

"September 5 is FREEDOM DAY!" It read. "As some of you may have seen the government has gone to extreme measures and are using scare tactics through the media to prevent the Melbourne protest.

"Here is Ballarat we can be a voice for those in stage 4 lockdowns. We can be seen and heard and hopefully make a difference!"

It calls for an end to the lockdowns, and to stand for human rights, noting that Australia is a "'FREE' COUNTRY!"

This was classified as a call to incitement, and police, who many have said are guilty of drastically overreaching their power, entered a woman's home and arrested her for a social media post wherein she wished to assert her freedom in a free country.

A Facebook search reveals that is has since been removed.

The Victoria Police gave a statement that said they were aware of the gathering, and that "Any gathering of this nature is in blatant breach of the Chief Health Officer’s directions and puts Victorian lives at risk."

Yahoo! News reported that the officers intend to arrest the others involved in organizing the protest, which is in violation of directives from the Chief Health Officer.

"Police executed a search warrant at a Miners Rest address this afternoon and a mobile device was seized. As a result, a 28-year old female has been charged with the offence of incitement and has been bailed to appear at the Ballarat Magistrates Court on 25 January, 2021."

The police stated that protest attendees will be facing "a swift and firm response from police," with fines and arrests for those in violation.

The restrictions inspired by the ongoing health crisis in Victoria have been remarkably strict. Currently under Stage 3 lockdown measures, individuals are only permitted to gather out of doors with one other person from their household. While in Melbourne, people are required to stay home unless they are out of the home for essential reasons.

Anti-lockdown protestors in Melbourne grew violent on Aug. 30, with demonstrators throwing rocks and flares at officers. Arrests were made and fines given.

The Australian lockdown had begun to ease under a three stage plan in May, but on by August 2 elected officials were still not satisfied with the COVID-19 case count, and have extended Stage 4 lockdowns.