"You know you look like a coward right now," O'Keefe told Chester. "You put your wine down, you go into the elevator, you're running away from me. It's that cone of silence Zucker has over you, isn't it?" 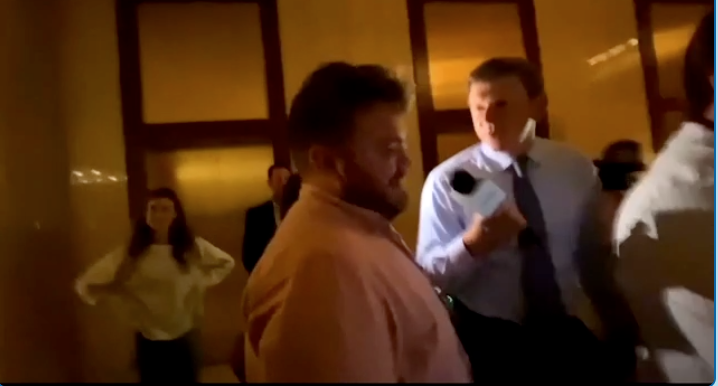 Project Veritas founder James O'Keeffe brought his latest legal victory to the CPAC stage on Friday. O'Keeffe has spent the past year exposing media companies, from social media to mainstream broadcast networks. O'Keefe spoke on the CPAC stage, bringing up whistleblowers who have been instrumental in revealing media bias.

After he spoke, and before a party thrown by the independent news outlet, O'Keefe took the opportunity to address CNN in the lobby of a nearby hotel.

O'Keefe approached CNN's Donie O'Sullivan in the lobby of the Renaissance Hotel in Dallas. He asked O'Sullivan for a comment on Charlie Chester, the CNN director who admitted that the network intentionally downplayed coverage of black-on-Asian hate crimes because to report on it would "set back" the BLM movement.

O'Sullivan doesn't respond or acknowledge the question. But O'Keefe is undaunted. He asked O'Sullivan why Chester is still employed at CNN. Project Veritas revealed earlier this year that Chester claimed the network had hyped COVID fears to drive ratings.

"Why are you walking away from me?" O'Keefe asked O'Sullivan, who continued on toward the elevator to get away from him. "You understand the effect you have this portion on the country working for CNN?"

"CNN hasn't fired Charlie Chester, why not?" O'Keefe asked. A woman from the hotel approached O'Sullivan to ask if he needed assistance. He signalled that he did.

"You know you look like a coward right now," O'Keefe told Chester. "You put your wine down, you go into the elevator, you're running away from me. It's that cone of silence Zucker has over you, isn't it?"

"How does it feel like to have transparency and scrutiny into you?" O'Keefe asked, while O'Sullivan was protected by a hotel employee citing COVID restrictions, and demanding O'Keefe keep six feet of distance from O'Sullivan in the packed lobby, where nearby restaurant patrons mingled and chatted with no adherence to any restrictions at all.

"I thought COVID goes away when we all sit down," O'Keefe said, "that's how it works."

COVID restrictions weren't enough to keep O'Keefe from asking O'Sullivan "What is your comment on Charlie Chester still being employed by your network?" O'Sullivan smiled awkwardly as O'Keefe questioned him about Chester's comments about COVID.

It was revealed by Project Veritas in April that Chester had said "COVID? Gangbusters with ratings. Which is why we constantly have the death toll on the side." He said, referencing the coronavirus case and death ticker CNN ran at the edge of their screen during the pandemic.

Chester had also admitted to wanting the death toll to be higher in order to increase the network's ratings, although he also expressed that he felt some level of shame for feeling such a desire.

"Let's make it higher, like why isn't it high enough, you know, today? Like it would make our point better if it was higher," Chester said. "And I'm like, what am I f***ing rallying for? That's a problem that we're doing that. You know?"

Chester said "it's fear. Like, fear really drives numbers," referring to TV ratings. "Fear is the thing that keeps you tuned in."

O'Keefe brought this up to O'Sullivan, who stepped into the elevator and got away from the cameras and the questions.

O'Keefe was steadfast in his goal, as is the Project Veritas team. It wasn't until a member of the hotel staff rushed in to protect CNN, using COVID restrictions as a reason, that O'Keefe had to let him go, his many questions still unanswered.

For their efforts, Project Veritas has been banned from Twitter, as has O'Keefe's personal account. None of that has been enough to stop him from pursuing his mission of revealing the bias behind Facebook, Twitter, CNN, and local Fox affiliates, when it comes to vaccines, voting integrity, and diversity, equity and inclusion practices.

Project Veritas laid bare the propagandist, progressive prejudice of executives like Jeff Zucker at CNN, hypocrisy of Twitter and Facebook execs, and is moving into the realm of exposing broadcast practices intended to push an ideological agenda while claiming to be objective news.