WATCH: Psaki claims 'Biden has rallied the world' to stand up to Putin

"President Biden has rallied the world, rallied Europe, to stand up against the efforts and actions of President Putin…" 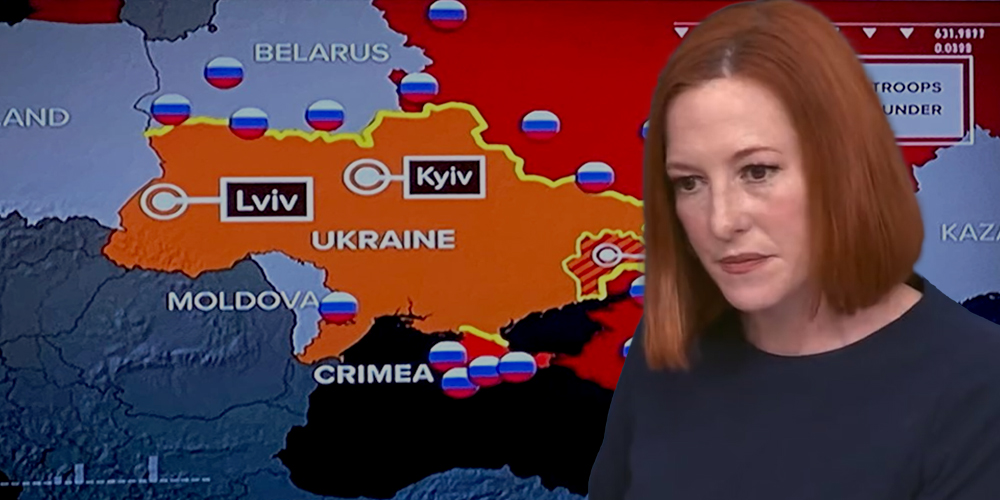 During Tuesday's White House press conference, Peter Doocy of Fox News grilled White House Press Secretary Jen Psaki on whether the sanctions announced earlier that day by President Biden would be enough of a deterrence stop Putin's aims in Ukraine.

"Why do you guys think that sanctions are going to stop Putin if his goal, ultimately, is to redraw the map so it looks like it did seventy or eighty years ago? What sanction is going to stop him from doing that?" Doocy asked.

"I think just to kind of reiterate maybe something you touched on there, for anyone who watched his speech last night, what he made clear in that speech is that he doesn’t even necessarily - or doesn’t recognize the independence of Ukraine as a country. That certainly gives us an indication of where his intentions are at this point in time."

"Sanctions can be a powerful tool. They have been in a lot of moments throughout history," she continued.

In addition to the US in announcing sanctions against the country, Canadian Prime Minister Justin Trudeau announced his country would be joining in sanctions against Russia also, as well as European Union and UK counterparts.

Sanctions are "starting high" according to the White House Press Secretary, in terms of their magnitude. "What we want to do is prevent a large-scale invasion, death and destruction across Ukraine, devastation to the Ukrainian people, and what happens with sanctions is they work over time. They’re not an end, they’re not intended to max out at the beginning, they’re long-lasting and sustainable, and they’re intended to squeeze."

Psaki said Putin wanted to divide NATO and wanted the Nord Stream 2 pipeline project to go forward, but neither of those things have happened.

"So his intentions and his objectives are not playing out," said Psaki.

Peter Doocy asks a follow-up question that references one of Biden’s commitments on the 2020 campaign trail:

The video referenced by Doocy can be seen below.

Here’s what Jen Psaki had to say to Doocy in that aspect:

"I’d hardly put it that way. I would look at it actually from the prism of the United States and President Biden has rallied the world, rallied Europe, to stand up against the efforts and actions of President Putin, and we’ve laid out very clearly exactly…" she said before being interrupted.

Doocy tried to bring up the likelihood of a further increase in gas prices expected to come. But Psaki didn’t respond immediately.

Yet, a follow-up question from another reporter demanded a more exact answer on that aspect of what to expect to come as this Russia-Ukraine conflict unfolds.

The commentary from Biden’s critics online are pointing out how the Biden administration canceled the Keystone pipeline from the onset. But then also later he had officials begging OPEC to produce more oil in response to US woes.

The current situation on the ground at this hour has Ukraine President Volodymyr Zelenskyy ordering army reservists to be at the ready to respond to the situation with Russia. In Russia itself, the country’s lawmakers on Tuesday granted Putin permission to use his army wherever he deems appropriate.