St. Louis has come up with a new mask mandate plan for all people over the ages of five to wear face masks when indoors. But Missouri's Attorney General intends to file a lawsuit against the mandate. 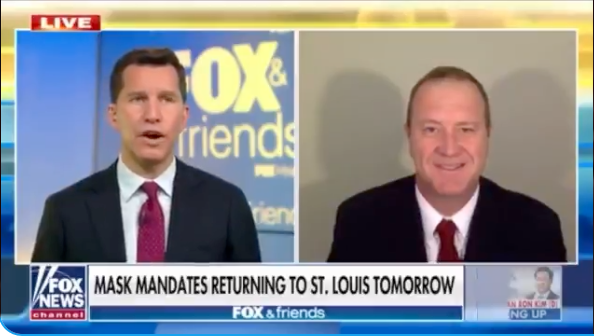 St. Louis has come up with a new mask mandate plan for all people over the ages of five to wear face masks when indoors. But Missouri's Attorney General intends to file a lawsuit against the mandate.

Speaking to Fox News on Sunday, Schmitt said that the mask mandate is "completely ridiculous."

"And the only solutions that we hear, essentially, from city leaders, to what they refer to as the safety os citizens is to defund the police and now requiring masks for kids and those who are vaccinated. This insanity has to stop," Schmitt said.

Inspired by the new Delta variant of the coronavirus, officials in St. Louis have also advised people to wear masks when outside as well, saying the masks are "strongly encouraged" in outdoor group settings.

"We've lost more than 500 St. Louisans to COVID-19, and if our region doesn't work together to protect one another, we could see spikes that overwhelm our hospital and public health systems," acting director of health for the City of St. Louis Dr. Fredrick Echols said, according to Fox News.

St. Louis is making this assessment based on a "case positivity rate," which saw a 7-day average of 212, or 9.4 percent, the highest percentage positivity since January in that area.

"In the meantime," Khan went on to say, "we need everyone, vaccinated or not, to wear masks in crowded indoor settings."

But elected leaders in Missouri are opposed to these new, COVID-case inspired restrictions. Attorney General Eric Schmitt said that "The citizens of St. Louis and St. Louis County are not subjects — they are free people. As their Attorney General I’ll be filing suit Monday to stop this insanity."

People with pronouns in their bios pushed back against the AG.

The Daily Wire reported that additionally, Wildwood Mayor Jim Bowlin also opposes the mask mandate in the St. Louis suburb, and will be allowing businesses and others who have gatherings to use parking lots of accommodate those without masks outdoors.