WATCH: Tucker Carlson jokes about how 'Russian disinformation' is behind any negative perception of Biden

"Don't let the Russians lie to you. People love the vaccine mandates. Even the thousands who've been fired because of them. They know perfectly well, how naughty they've been. They need discipline and they're grateful to get it." 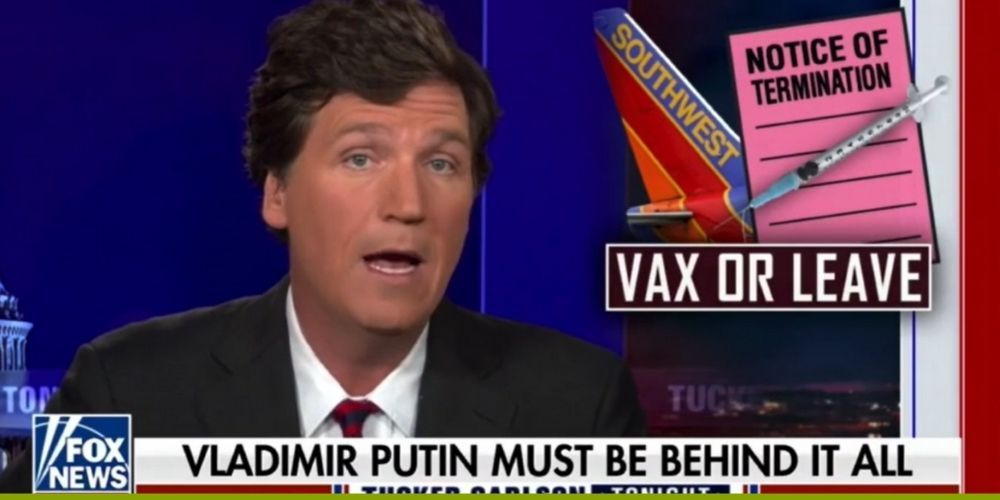 On Fox News Wednesday night, Tucker Carlson devoted a sarcastic segment to the absurd conspiracy often spun by Democrats that the Russians are behind every progressive policy failure.

"If you've been paying attention for the past few years, and if you're watching this show, we hope you are. There has likely been a moment when you realize that reality is not quite what you thought it was. A lot of the things that you assumed were true in fact, are not true. They are instead a mirage. They're a web of purpose-built myths, designed to deceive rather than inform you. You can't really trust your senses anymore. Your eyes will lie to you. That's an unnerving thought, especially when you realize that ultimately, Vladimir Putin is behind it all."

"Russian disinformation is everywhere in this country. It's lurking, even within our own minds, it's worse even than Adam Schiff told us it was. Just last weekend for example, thousands of Southwest Airlines flights failed to leave the ground. It seemed obvious that the mass cancellations were a direct reaction to Joe Biden's vaccine mandates. They were announced just days before, and then actual Southwest pilots appeared to confirm this. But no, that's just what the Kremlin wants you to think. In fact, as the authorities assured us all along, it was only the weather, nothing more than a few clouds, calm down America. That Southwest Airlines story is as fake as Hunter Biden's laptop."

"Don't let the Russians lie to you. People love the vaccine mandates. Even the thousands who've been fired because of them. They know perfectly well, how naughty they've been. They need discipline and they're grateful to get it. Thank you, Mr. President, may I have another."

"There is a reason in other words, that Joe Biden is the single most popular head of state in American history, and the reason is, he's awesome. How beloved is Joe Biden? Well, let's put it this way, at sporting events across the country. Fans are breaking out in cheers for the White House and its wise and eloquent leader. These are not coordinated political set pieces, 'AstroTurf' as we say in Washington, no, these are spontaneous eruptions of love."

"One minute, you'll be watching a college football game from the stands. The next minute you'll be overcome with the desire the pressing irresistible need to tell Joe Biden how great he is. It's like having to go to the bathroom real bad, except better and more progressive."

"This is happening, ladies and gentlemen, and that's happening everywhere. A cresting tsunami of support for Joe Biden."

Carlson then played a montage of "F*** Joe Biden" chants that have been breaking out in stadiums across the country.

Carlson continued, "It's inspiring when you think about it, Joe Biden on his first day in office promised to bring this country together and now he's actually doing it. It doesn't matter what team you showed up to root for. In your heart, you a Joe Biden fan, and that is national unity."

"Now not everyone is for this, of course. To Vladimir Putin who hates us for our freedoms, and also because he's Russian, this is a threat loving Biden is a thing of beauty. So, by definition, Vladimir Putin must destroy it. It's like a sunset, a rose garden, a baby's smile. It's something lovely that must be defiled if Russia is going to dominate the world. In order to corrupt what is good and beautiful, Putin has spread the lie that these expressions of pure devotion to Joe Biden are instead attacks on Joe Biden, vulgar attacks that include an epithet beginning with ‘F’ and sadly, a lot of people believe that."

"Russian disinformation is effective... ao thank heaven, NBC has been there to correct that misperception over the past several years, NBC has done maybe more than any other news organization in this country to fight the Kremlin's propaganda machine. Thanks to NBC, for example, your doubts about the fairness of the last election have not only been settled, they're now illegal. You're not allowed to express them ever again."

"So we can be thankful that there was a credentialed representative of NBC sports on-hand earlier this month when fans at a NASCAR event begin to celebrate spontaneously celebrate Joe Biden. If the NBC lady had not been there, you might very well have misheard what the crowd said."

Carlson then played the now viral clip of an NBC reporter interviewing NASCAR driver Brandon Brown on October 9, after the driver won his first race in the league's Xfinity series at Alabama's Talladega Superspeedway. The crowd could be heard clearly chanting "F*** Joe Biden," to which the reporter Kelli Stavast said, "Such an unbelievable moment, Brandon... you can hear the chant from the crowd. 'Let's go, Brandon!'

Tucker continued, "'F Joe Biden,' please, come on, wake up America. That's like looking at the thriving, incredibly robust economy all around us and concluding there's inflation, settle down, Vladimir Putin. That's ridiculous."

"But who is Brandon? you ask. Well, just another happy American who is grateful for the wise leadership of his benevolent president. In fact, Brandon is a newly arrived American, part of what we call the Biden generation. He's an undocumented trans Haitian migrant now enrolled, thanks to a Pell grant, as a film studies major at NYU, as well as a part-time non-binary rights activist and puppeteer. Brandon is the embodiment of the new American dream where everything's free, but everyone is still angry."

"Just this month, thanks to Joe Biden, Brandon got his fourth COVID shot. That means he's an incredibly good person, far better than you are. And the crowd is simply celebrating, as grateful people spontaneously do. 'Let's go, Brandon, let's get a fifth shot. Let's go Brandon.'"

"So once you strip away the Russian propaganda, it's all pretty obvious and natural, but it does make you wonder if you pause for a moment, if the Russians are lying about 'Brandon,' what else are they lying about?"

"We're glad you asked. They're lying about hospitals. Vladimir Putin is making up stories about our hospitals here in the United States. Putin claims that our healthcare system is collapsing because of Joe Biden's vaccine mandates and that's preposterous. And yet, somehow those crafty and relentless Kremlin propagandists have managed to get that story onto American television."

Tucker then played a newclip from Fox News in which the reporter in Louville, NY said, "Hospital officials say they still plan to pause service in the maternity unit, starting Saturday." A doctor added, "You know, we've had 43 resignations. 70 percent of those are in clinical areas. Unfortunately, a number of the maternity nurses, you know, the professionals who do labor delivery and postpartum care are part of that group."

Carlson continued, "So the maternity nurses all left. There'll be no more delivering babies in that hospital. Now, the Russians blame Joe Biden for this. But the truth is very different. The truth is that this is yet another heartfelt tribute to Joe Biden. Those nurses left, so they can devote more time to campaigning for Joe Biden's reelection in 2024. Once again, this is an active love disguised by a foreign power as an act of contempt."

"That's happening in a lot of places. Ladies and gentlemen, not just New York, central Maine medical center is one of the biggest hospitals in the state of Maine. It just halted it's pediatric and trauma admissions. You want to treat your child for a disease you've been hurt in a car accident. You can't go there. Why? Well, they cited staffing shortages because of the vaccine mandates, according to a local news outlet, 'The hospitals preparing to potentially lose hundreds of workers. So far 84 staff members have resigned.' This is one hospital in a smallish town in one state. And they're going to quote, lose hundreds of workers."

"In Washington state, the Spokane spokesman reviewed his report. Their long-term care facilities could face critical staffing shortages. Why?  Vaccine mandates taking effect October 18. Oh. So if you just showed up from another country without permission to be here, you know what you can do for a living, take the place of someone who moved on. 'Legacy Americans.' In the state of Michigan, the head of the largest nursing homes association said the vaccine mandates will cause them to face an even greater crisis or as a good American would put it a greater opportunity."

"Residents of Seattle by the way, are about to have plenty of new opportunities, opportunities to practice their self-defense skills. It's a good excuse to brush up on that TaeKwonDo from fifth grade, but you forgot about those skills time to get them back. The people of Seattle are about to confront a massive shortage of law enforcement officers. You guessed it, Joe Biden's vaccine mandates. Here's how one local news station reported it."

Carlson then played a clip from Fox 13 in Seattle in which the reporter said, "Already short-staffed the Seattle police department is preparing for a potential mass firing of officers. Starting October 13, the agency will move into what's called a stage three mobilization. What the department's manual says is reserved for scenarios that have the potential to cause significant harm. Property destruction or widespread public fear in 354, sworn personnel had not submitted proof of vaccination as of Tuesday, that number dropped to 292 today, but still that's more than 25 percent of all deployable officers."

"Now, Joe Biden is going to take the blame for this. If the Russians have their way Vladimir Putin will tell you, it's Joe Biden's fault. It's a tribute to 'Brandon.'"