"What the State Department doesn't appear to understand, or maybe this is the whole point, is that the existence of BLM is a national humiliation to the United States." 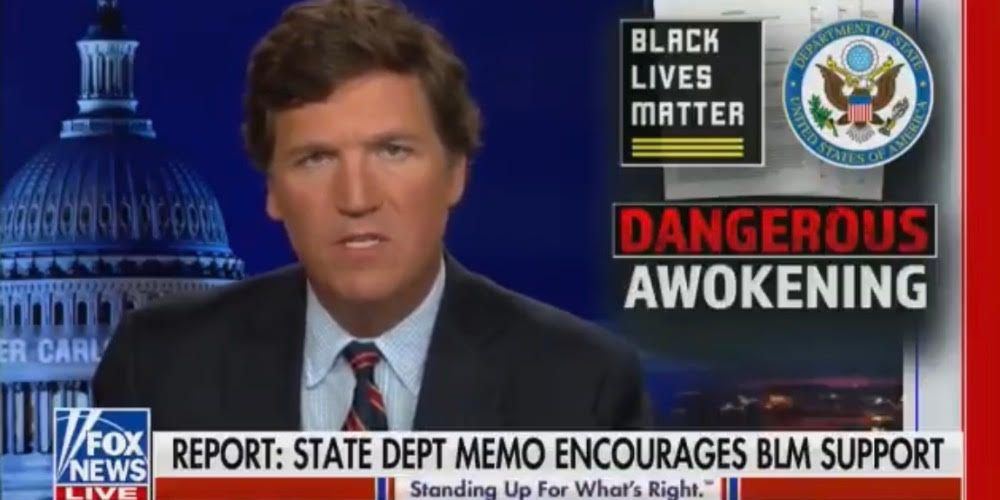 Primetime Fox News host Tucker Carlson slammed the State Department Monday after issuing a memo to US Embassies encouraging them to fly Black Lives Matter flags in support of the anniversary of the death of George Floyd.

"The memo says that US Embassies can fly a BLM flag and the diplomat should reference Black Lives Matter in their speeches," Tucker said.

"Should American ambassadors come out against the nuclear family as BLM has for socialism? As BLM has for race hatred? As BLM does every day!" the Fox News host continued.

The Marxist Black Lives Matter movement has been at the forefront of anti-police riots and civil unrest in the United States since the organization was formed and partook in national riots that lasted for more than 100 days in wake of the death of George Floyd.

Tucker Carlson slammed the State Departments memo and said that the existence of BLM is a "national humiliation," acknowledging that "the rest of the world is watching."

"Of course [they’re watching], we're America. They pay close attention to what we do," Tucker said. The Fox News host went on to play a clip of Chinese officials explaining that the Black Lives Matter movement "shows the United States is in a terrible place."

Tucker said the message the Black Lives Matter movement is giving to other countries is that the "United States is terrible" and the State Department’s memo only enhances those views. The State Department failed to respond to Fox News Tucker Carlson’s request for comment, nor did they provide clarification.