WATCH: Woman breaks down in tears over subway sexual harassment, lack of action by nearby men who told her to 'go away'

"Metro, there’s a systemic problem and so many women don’t feel safe taking the train to work, and I hope that some change can come from this." 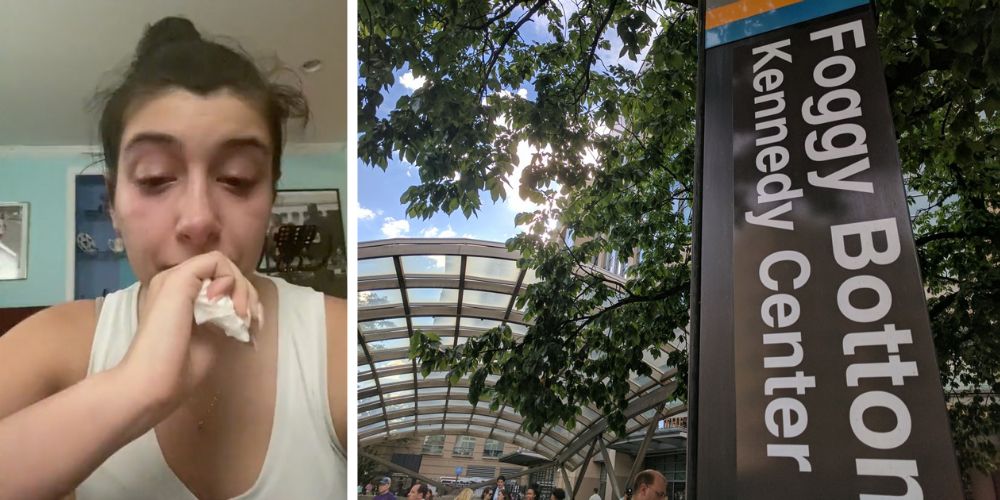 In a TikTok video circulating on social media, one woman recounted a recent experience she had on Washington, DC’s metro system, in which she was allegedly sexually harassed by a man while onlookers did nothing.

"I’m making this TikTok because I had a really horrible experience on the DC Metro, and even after two phone calls with the police, I don’t think anyone cares, and I don’t think I’m going to get help unless I reach out to a different audience," the woman, who goes by Helen Molteni on TikTok, said in the video while sobbing.

I was at the Foggy Bottom platform waiting for my train and it was about a 13 minute wait for my train at the time, and there was a man who… looks like he’s carrying an alcohol bottle."

"He just hits on me, just, you know, shouts, and I keep walking because I don’t — I’m used to that, and I don’t want to pay it any mind."

The woman continued to say that the man became angered by her walking away, and began shouting vulgar things at her.

"And then he gets mad and he starts yelling at me as I’m walking away, telling make that I have a stanky a** p*ssy, that I’m disgusting, and I’m a wh*re," she said.

The woman said she called DC Metro’s non-emergency number, told the operators what happened, "and then I just had to wait another, at that point, 10 minutes for my train."

"And the situation kept escalating. He kept yelling at me, he moved closer, he told me that — he made threats to rape me, and told me to come sit on his lap, kept calling me a wh*re, talking about my p*ssy."

"And at the time, there were maybe 20 other people within a 20 foot radius, and no one did anything," she said.

The woman said she eventually turned to the crowd and lambasted them for not stepping in, which was met with mockery from the crowd.

"And with about four minutes left toward the train, I finally looked around and I looked at — I’m sorry, but most of them were men. About 90 percent of them were men and I said 'you all hear this? Why aren’t you doing anything?'"

"And it was just like these men ganged up on me and they turned it on me and told me 'well, why don’t you just go away?' Like, well, I have to wait for my train, I have to get on my train because I have to take this Metro to and from work. And this guy is just keeping and going and threatening and harassing me. And now I have the bystanders who are not only being silent, but now they’re yelling at me for calling them out for being cowards."

The woman said that people just continued to watch her cry, even on the train, until a woman came and gave her a hug. "Thank you to whoever did that."

"Metro, there’s a systemic problem and so many women don’t feel safe taking the train to work, and I hope that some change can come from this."

The video prompted outcry on social media, with Twitter users both blasting the bystanders for not stepping in, as well as the city for allowing such an incident to occur.

In June, MetroTransit Police recorded 74 incidents of crime on trains in the DC, Virginia, and Maryland area. This is up from last June, where 52 crimes were recorded.

With six months remaining in the year, from the date of the last MetroTransit Police report, this number could easily double, surpassing both 2021 and 2020, when Metro ridership was down. In 2019, the last full year before the pandemic, 962 crimes were committed on Metro train cars.

In April, shortly after the Brooklyn subway shooting, Metro Transit Police Chief Michael L. Anzallo announced revamped safety strategies for public transportation in the DMV area, including on trains, buses, and at Metro facilities like bus stops and train platforms.

"While crime is a community and regional concern, customers should feel safe on Metro, and that means using every tool at our disposal including investing in the community and partnering with local resources for essential services," Metro General Manager Paul J. Wiedefeld said in a statement, according to the Washington Post. "In addition, MTPD is strategically targeting enforcement efforts in areas where crime has increased."

Included in this new approach is the placement of both plain clothes and uniformed officers at stations and in buses, increased patrols, an anti-harassment public awareness campaign which was launched in May, and easier access to MetroTransit police lines through the usage of QR codes.

Metro is seeking to bring large numbers of people back to their ways of transit, with average daily ridership numbers nowhere near their pre-pandemic levels. Rates of crime, and the removal of 7,000-series train cars from service due to safety concerns, have not helped their ridership levels.

In 2022 so far, the average number of daily rail entries is 191,000. The last year to see a number over this was 2019, where 626,000 people on average rode transportation methods in the city and nearby neighborhoods daily, according to WMATA data.