"This is indeed Putin’s gas hike. This is what we have seen in the most recent months, of what we’re seeing at the gas pump." 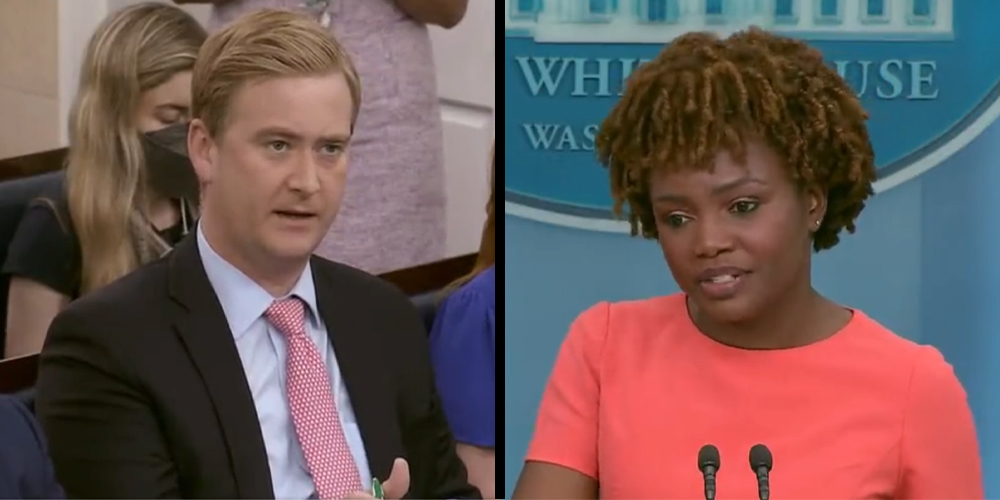 As America prepares to enter a summer of inflation and high gas prices, Peter Doocy of Fox News grilled the White House Press Secretary on Tuesday about whether the Biden administration still blames Russia’s Vladimir Putin for the current economic situation.

"And you just mentioned Putin a few times, as a reason for recent inflation. Do you guys think that any part of inflation this year is because of President Biden’s spending plans, or is it all Putin’s fault?" asked Doocy.

On Monday, Biden published an op-ed for the Wall Street Journal where he outlined his plans for fighting inflation. He met with Federal Reserve Chairman Jerome Powell to discuss the matter on Tuesday.

The White House press secretary in her response echoed the talking points mentioned in Biden’s piece:

In a follow-up, Peter Doocy asked: "Does President Biden take any responsibility for his policies potentially contributing to inflation?"

She reiterated: "When we talk about the gas prices right now, this is indeed Putin’s gas hike. This is what we have seen in the most recent months, of what we’re seeing at the gas pump. And so that is a fact. We have seen about a 60 percent increase in the past several months and because of the amassing and his invasion of Ukraine, and so the President his goal right now, and what he is frustrated about, is what the American people have to go through, and what they are trying to deal with, as they are around their kitchen tables. So that is his focus right now.”

President Biden signed an Executive Order to ban Russian oil, coal, and natural gas imports into the United States back in early March. In his public address he asserted that it would target "the main artery of Russia's economy," but even CBS News recently reported that Russian ruble is the "strongest currency in the world" so far this year.

The average price for a gallon of gas in California surpassed six dollars over Memorial Day weekend, with the national average setting yet again another record on Tuesday at $4.62 per gallon.