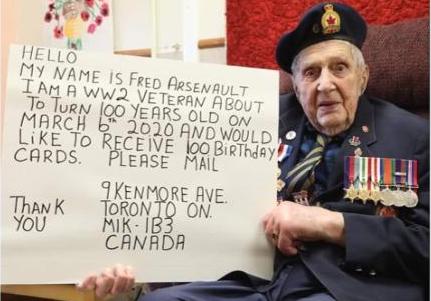 Canadian WWII veteran Fred Arsenault took to social media with a request. As his 100 birthday approached, he issued a wish.

In a photo his daughter posted to social media, he sits wearing his uniform, pinned with the medals that symbolized his service and dedication to his country.

When his daughter shared the photo online, neither she nor her father had any idea how spectacular the reaction would be.

Canadians who wanted to show their appreciation, and contribute to fulfilling his wish, sent in card after card to commemorate Arsenault’s birthday.

Their reaction was one of gratitude, and together they posted another photo. Again, Arsenault appears in his uniform. His smiling daughter holds up the sign.

“Thank you for your overwhelming response,” it reads. “It was more than Dad and I could have imagined. His birthday wish is now complete, having received over 90 thousand birthday cards.”

The response to the thread posted on Twitter by The Royal Canadian Legion was full of well-wishers who had sent in cards of their own, and were overjoyed to hear how many cards Arsenault had received.