Zoo flamingo euthanized after child disables it with rock

A flamingo in an Illinois zoo became gravely injured after a child threw a rock at it. Zoo officials were left with no choice but to put it down. 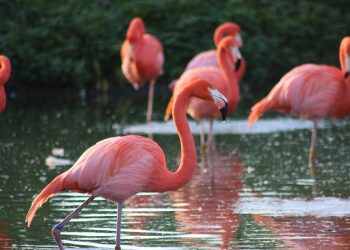 A flamingo in an Illinois zoo became gravely injured after a child threw a rock at it. Zoo officials were left with no choice but to put it down.

According to Global News, zoo director Jay Tetzloff of the Miller Park Zoo in Bloomington said that a child accidentally injured the bird by throwing a rock towards it. The rock broke the flamingo’s leg in what Tetzloff described as an “unfortunate accident”; zoo officials were left with no choice but to peacefully euthanize the animal.

Flamingos can usually live up to 30 years in the wild; in captivity, and without predators, they can live to an age of more than 50. An adult’s legs can be as long as 127 centimeters. Without their legs, flamingos are rendered almost useless.

Zoo officials mentioned that they are working with the child and their family to ensure that the child remembers this as a “learning experience” to never hurl objects at any animal or a living being ever again. It is currently unclear whether the child’s family had to pay a fine or damages.

The Miller Park Zoo now houses 24 flamingos. The zoo will need to heighten security around habitats and exhibits to ensure a similar mishap doesn’t occur. Meanwhile, officials also clarified that they will not be changing the layout of the flamingo habitat.