"The problem [of] this survey is how it’s being used to bolster claims of liberal intolerance," Hannah-Jones opined. 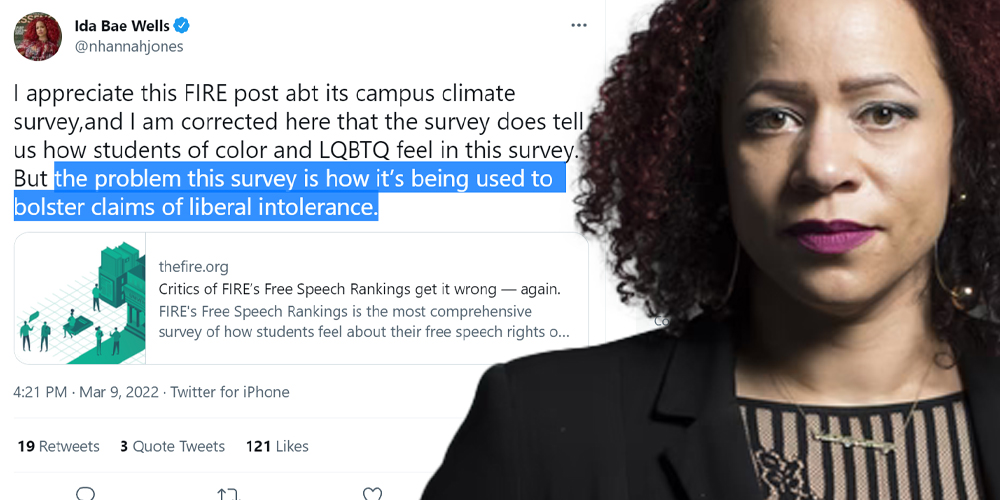 Nikole Hannah-Jones of The New York Times questioned the data brought forward by the free speech group FIRE because it validates the concerns about self-censorship that white people have, in addition to minorities.

"But the problem this survey is how it's being used to bolster claims of liberal intolerance," Hannah-Jones claims.

She further says it’s wrong that conservatives use this report to bolster their claims about college campuses being excessively liberal and "too intolerant" to handle. Hannah-Jones asserts that it’s wrong for white conservatives to claim they are suffering, because students of all stripes experience the phenomenon.

To decode what Hannah-Jones is trying to say: she seems to believe white people and minorities can’t both have this problem mutually. To her it’s one or the other.

The reality of what the FIRE blog post points out is that students in the "white," "black," "hispanic," and "Asian" blocs experience LESS feelings of self-censorship from their multiracial and American Indian counterparts.

FIRE's analysis of the data reads: "According to the survey, one in five [b]lack students report self-censoring 'fairly' or 'very' often, as do almost one in give Hispanic (18%) and Asian (17%) students. These percentages are higher for multiracial students (22%), American Indian students (25%), and students who identified their race/ethnicity as 'Something else' (32%). when it came to sexuality, students identifying as heterosexual/straight or as 'something else' self-censored most often."

It’s only with the demographics of sexuality that Hannah-Jones can even begin to make the unilateral claims she asserted within her tweets. But even then it’s straight people who feel compelled to self-censor beyond any other demographic.

When it comes to the FIRE blog post, the organization attempts to address critique brought forward by Hannah-Jones. Which resulted from a New York Times op-ed by former FIRE intern Emma Camp.

Much of the group’s response to feedback was a mix of saying people who were critical haven’t taken a meaningful look at the data, alongside saying the parties involved in this discussion to begin with approaching the discussion from a purposefully sensible point of view.

In support of that, FIRE points to how not only they’ve defended the likes of Mike Pence and Andy Ngo in the past, but also Hannah-Jones in her pursuit of a tenure at University of North Carolina at Chapel Hill.

FIRE points to their openly available data for critics to review when making their observations and assessments.

The free speech group acknowledges both sides of the conversation. On one hand there’s a student at Arizona State University who said they are "scared to be openly transgender" at their school given what they see as an overtly conservative climate.

But also: FIRE's rebuttal goes as far as taking a meaningful look at the question posed by Hannah-Jones. What kind of censorship do black and colored students face on campus?

But when it comes to the general mission objectives as set forth by the body of work presented by Hannah-Jones, she's someone who in the past targeted those who questioned her. Beyond general episodes where Hannah-Jones responds poorly to feedback, the issue of school choice is particularly personal for her as of late.