"After my daughters heard the gunshots and the screaming, they ran upstairs, locked themselves in the bathroom and immediately called 911," he added. "They acted very swiftly and smartly every step of the way and Diana and I are extremely proud of them." 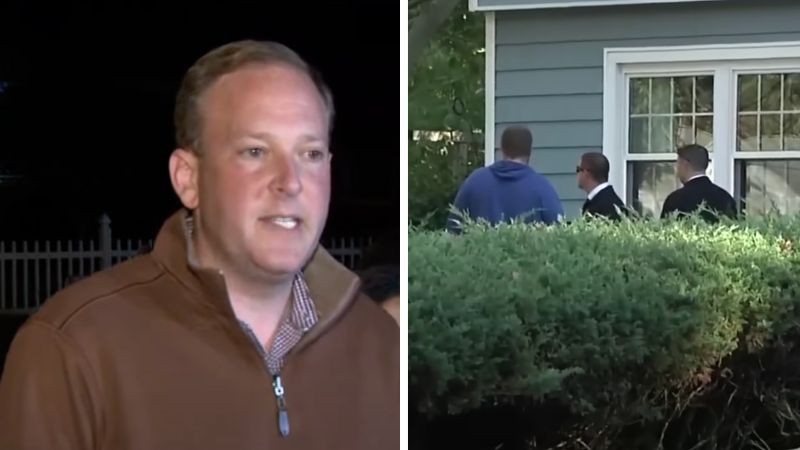 On Sunday, New York Representative and gubernatorial candidate Lee Zeldin slammed the state’s crime crisis after two teenagers were shot outside his Long Island home on Sunday afternoon, where his two teenaged daughters were inside.

In a statement released by Zeldin to Twitter, he confirmed that while he and his wife were not home at the time, his two daughters had been there, doing homework. The Suffolk County Police Department said that two teenagers were injured in a drive-by shooting that occurred on Zeldin’s street.


"Thank you to everyone who reached out expressing concern regarding the shooting outside my home this afternoon around 2:18pm," he wrote.

"My 16 year old daughters, Mikayla and Arianna, were at our house doing homework, while my wife, Diana, and I were in the car, having just departed the Bronx Columbus Day parade in Morris Park.

"After my daughters heard the gunshots and the screaming, they ran upstairs, locked themselves in the bathroom and immediately called 911," he added. "They acted very swiftly and smartly every step of the way and Diana and I are extremely proud of them."

Suffolk County police told Fox News that the shooting occurred at around 2:20 pm on Sunday afternoon in the Long Island neighborhood of Shirley. They said that the shooting incident was "unrelated to the residents of the house."

"The two individuals who were shot were laying down under my front porch and the bushes in front of our porch," Zeldin wrote. "My understanding is that they have been transported to area hospitals. I do not know their identities."

In a tweet, Zeldin added that "one of the bullets landed just 30 ft away."

Three teenagers were walking down the street when a person in a dark-colored SUB fired multiple gunshots through the car window, injuring two males, both 17 years of age. A third teenager fled the scene.

The two males were taken to a local hospital with non-life threatening injuries.

"Law enforcement is currently at our house. My entire family is at home working with the investigators and providing the security footage from our home cameras," Zeldin wrote.

"My daughters are shaken, but ok. Like so many New Yorkers, crime has literally made its way to our front door. My family is grateful to all who have reached out and we will provide another update when we can."

When Zeldin arrived at his home, he found that his front porch was part of the crime scene, which was spattered with blood.

In a Sunday night press conference from his street, Zeldin said that the state’s crime crisis is hitting close to home.

"It hits really close to home when it shows up on your front doorstep," Zeldin said. " I'm just so grateful that my daughter's responded as quickly, as swiftly as they did."

The gubernatorial candidate also noted that just 24 hours "to the minute" before the shooting took place, he had been doing an interview on the same porch with a reporter "talking about rising crime in New York."

"We cannot surrender any street anywhere in the state of New York to criminals. I want to see our law enforcement in charge of all of New York's streets," Zeldin said of the state’s recent crime wave.

"I don't care if you're in a big city, a small city, a big town, a small town. I want law-abiding New Yorkers to be able to go ride a subway car and not have to hug a pole or grab a guardrail, being afraid of being pushed in front of an oncoming subway car. Or having to take off your yarmulke because you're Jewish and others who, you know, others are being attacked because they're Jewish."

"I just don't want to ever stand in front of a crime scene tape outside my own home or outside of anyone else's," Zeldin said, thanking law enforcement.

The shooting comes a few months after a man was arrested at a campaign event for Zeldin after attacking the Republican gubernatorial candidate.

At the July event, Zelda had been speaking in regards to bail reform when a man jumped on stage and began yelling. Officials wrestled with the alleged attacker, who pulled out a blade during the struggle. The man was taken away without incident, and Zelda finished his speech.

43-year old David Jakubonis was charged with second-degree attempted assault, was held overnight in Perinton Town Court, and was released on his own recognizance hours later.