Following the attack on an ICE detention centre in Tacoma, Washington by a 69-year-old self-proclaimed “Antifa” terrorist named Willem Van Spronson, King decided to praise the perpetrator’s actions, along with a number of other prominent left-wing activists. 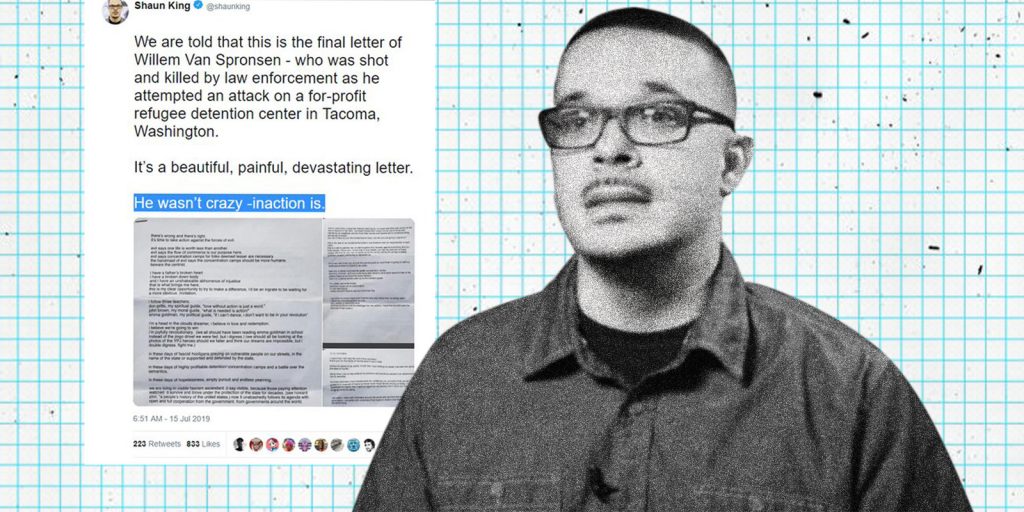 The United States is going through a unique polarization. Those on the right and the left wing are increasingly alienated from and hostile to one another.

One of the more frightening trends occurring is the normalization of the left’s extremist views. While extremist views on the right have been rooted out exposed in the public square, extremist views from the left need not hide at all, as their viewpoints seem to be more tolerated by mainstream voices.

The schism continues to deepen. As a result of the lunacy that continually hits us over the head every day, many have simply given up on listening to opinions from the opposite side of the aisle.

More grey than black or white

A clear and tiring example of this is civil rights activist Shaun King, who has not been listening for some time now. King himself gained prominence following the shooting of Michael Brown, in which a police officer shot an 18-year-old African American boy; he stayed in the public consciousness as a Black Lives Matter activist, keeping himself relevant until a number of controversies began to hound him.

Following the attack on an ICE detention centre in Tacoma, Washington by a 69-year-old self-proclaimed “Antifa” terrorist named Willem Van Spronson, King decided to praise the perpetrator’s actions, along with a number of other prominent left-wing activists.

A “letter” to comrades

The manifesto itself is heavily peppered in Marxist dialect, addressing his “comrades,” writing to apologize for missing “the rest of the revolution.”

“I am Antifa,” says Van Spronsen, aligning himself with a group that the New Jersey Office of Homeland Security has designated as “Anarcho-Extremists.”

“The semi-automatic weapon I used was a cheap, home built unregistered “ghost” ar15, [sic] had six magazines,” writes Van Spronsen. “I strongly encourage comrades and incoming comrades to arm themselves.” He continues, “we are now responsible for defending people from the predatory state. Ignore the law in arming yourself if you have the luxury. I did.”

Who are the real radicals?

Terrorism is the unlawful use of violence and intimidation in the pursuit of political aims. To simply call a spade a spade, Shaun King is championing the writings of a disillusioned terrorist.

What the exact solution is to the complex crisis cursing the United States’ southern border is obviously unclear. But is there any position more “extreme” than calling for the liquidation of the border?

Is there a position more “extreme” than calling for “No border, no wall, no U.S.A. at all“? To end the United States as it is currently known, and to accept an enormous flood of immigrants larger than what we already know, radically changing the country in ways not yet understood?

Somehow, these are not considered to be a radical viewpoint.

King later went on to delete the tweets praising terrorist actions, making them disappear as if nothing ever happened. King did not apologize, but more likely did not want to deal with the amount of blowback he was already beginning to receive.

This is apart of the problem, also. When someone does something that is very clearly stupid, like sympathize with a terrorist gunman, they are then called out for their stupidity.

No matter what these people say, they will indefinitely be labelled as either “Russian bots” or trolls from 4chan. At no point is self-reflection necessary, and in the end, King will surely walk away feel validified.

This is part of what’s known as the “backfire effect,” this effect takes place when, in the face of contradictory evidence, established beliefs do not change but actually get stronger.

This effect has been demonstrated in a number of psychological tests. Subjects are given data that either reinforces, or goes against their existing biases.

In the majority of cases, people will double down on their beliefs. Their confidence in their prior position is increased, regardless of any evidence they were faced with.

In a pessimistic sense, this would make most refutations useless. And now that we are this far down the line, that’s exactly how it all feels. Useless.