AJ+, the famous and well-funded Qatari TV channel, published a video on Friday which appeared to promote Holocaust denial. 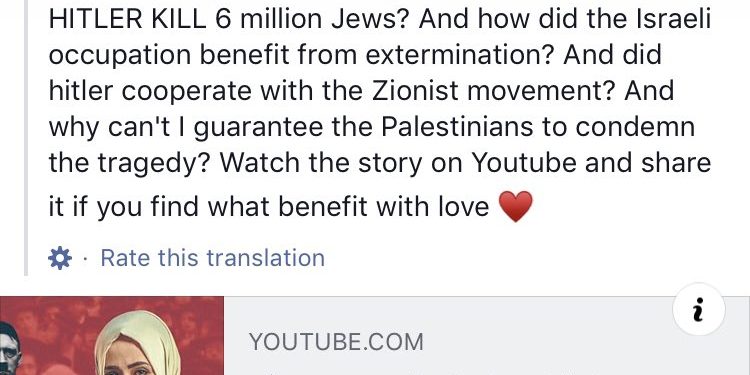 AJ+, the famous and well-funded Qatari online news, and current events channel published a video on Friday which appeared to promote Holocaust denial.

Aj+ is owned and operated by Al Jazeera Media network.

The seven-minute video published by AJ+’s Arabic division claimed that the Jews used the Holocaust to take money from the Germans.

The disturbing video also claimed that the Jews used the money they received to push out “Palestinians,” and also to create the State of Israel.

The video further claimed that the narrative put forward by the Jewish people was not proportional to the suffering of others such as homosexuals.

The site even fell into the obvious and anti-semitic argument claiming that Jews were able to do all of this because of their control of the media and capital.

“The creation of the State of Israel itself stems from the Nazis’ nationalistic ideology,” it went on to say.

The video was taken down Saturday afternoon after large-scale social media complaints.

Al Jazeera’s PR division sent out a tweet on Saturday noting that they had in fact deleted a video because “it violated the editorial standards of the Network.”

What do you think about the released anti-semitic video? Join the conversation by commenting below.