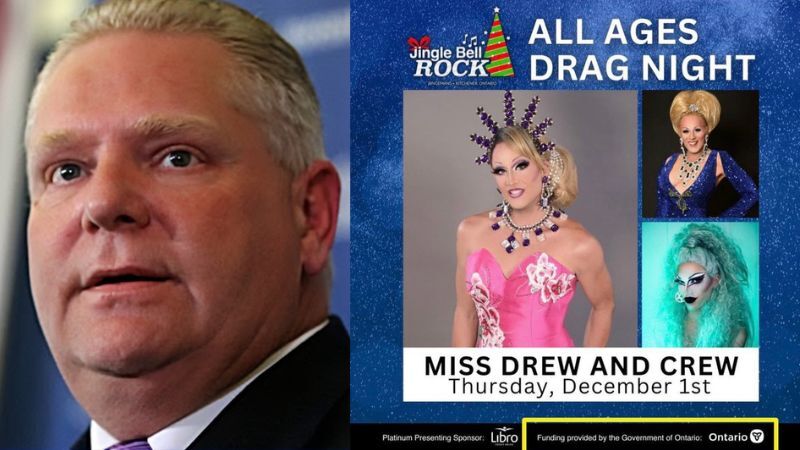 The Jingle Bell Rock event featuring Miss Drew and Crew, a group of three drag queen performers, will be held at Bingeman’s amusement theme park in Kitchener, Ontario, and the flyer for the event shows that funding was provided by the Government of Ontario.


Former Progressive Conservative MPP Belinda Karahalios, who is co-founder of Ontario’s New Blue party, tweeted a screenshot of the flyer, questioning why Ford’s government would be using taxpayer’s dollars to pay for adult men to dress as women to perform for children, stating that drag shows are by nature not meant for “all-ages.”

The replies to Karahalios were the usual mix of those supporting this form of family entertainment and those who feel it is inappropriate. Some pointed to the desperate situation many Ontario families now find themselves in, having trouble even covering the most basic costs of living, and questioned such frivolous spending by the Ontario government.

One Twitter user felt that his daughter was exposed to all sorts of sexually explicit content in the media, advertising, and television shows and suggested drag was, by comparison, more like “fun dress up” to children.

But for some, there’s more to drag shows for children than fun dress-up entertainment. Critics of this new family activity believe its real purpose is the “queering” of childhood, an attempt to position queer and trans cultural forms as valuable components of early childhood education, with the aim of breaking down norms of morality and human behavior. This is the ultimate goal of queer theory—the queering of society.

Protests outside “family-friendly” drag events are now a common occurrence in Canada. Last week, a drag queen storytime event held at a library in Hamilton, Ontario drew a crowd of protesters and counter-protesters, and in BC, a Story Telling with Drag Queens event, which featuring a drag performer called Satanix, was met with an angry group of protesters demanding that kids just be allowed to be kids.
ADVERTISEMENT
ADVERTISEMENT
Ford Drag