An eloquent call for sanity

This is call for a return to humanist-informed liberal thought. He asserts that liberals must reject the binary-based identity politics that rules the day and be more nuanced and measured. 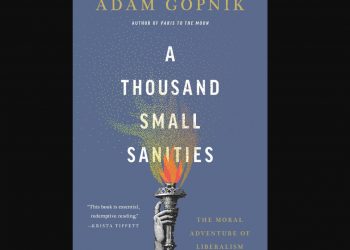 Adam Gopnik’s A Thousand Small Sanities is a much-needed call for common sense. Since the election of Donald Trump, most of us in North America have had to adjust to a more incoherent, divisive reality. While Fox News dominates the cable news landscape, and Facebook and Twitter dominate the social media landscape, the culture war rages on, breaking up families, lovers, friends, co-workers, businesses, and institutions.

Gopnik is wise to begin his new book by taking us for a walk through the night of the November 16th election of Trump. We join him and his seventeen-year-old daughter as they stroll the streets of New York and ruminate about the implications of the election. Gopnik’s daughter, skeptical of progressivism yet “troubled by the result,” is comforted by him. He tells his daughter that “liberalism is inextricably tied to liberty, and that liberal humanism is a fact-first philosophy with a feelings-first history.” The liberalism he wishes to show his daughter incorporates an “accommodation of contradictions.”

We are living in an era where we are intolerant of contradictions–where facts are being deployed to “destroy” feelings on YouTube, while feelings are being deployed on Facebook and Twitter to render facts useless. What Gopnik—and indeed many of us who are still relatively sane post-Trump people—are hoping for is a much-needed balance. The divisive impact of the 2016 election destroyed personal and professional decorum. While presidential politics is important, it’s not so essential to everyone’s daily lives that it should rip them apart.

In mounting his argument for a return to sanity, Gopnik first provides us with a working definition of the liberalism he wishes to advocate for. Using a humanist framework, Gopnik argues that it’s an “evolving political practice that makes the case for the necessity and possibility of (imperfectly) egalitarian social reform and ever greater (if not absolute) tolerance of human difference through reasoned and (mostly) unimpeded conversation, demonstration, and debate.”

If this definition seems frustratingly parenthetical and exasperating at first, don’t worry, Gopnik is aware of it. But it is precisely the asides and nuances that Gopnik is advocating for in this fascinating book that make a classical, humanist, liberal approach to life and politics so worthwhile.

The problem that we’re facing as a culture is that the collective discourse is in a loop: so much of the left is stuck repeating the patterns of this less interesting version of intersectionality, while the right employs a similar kind of identity politics that values difference over everything else has taken hold.

The constant cultural quarrel is killing liberalism and emboldening authoritarianism. As Gopnik puts it, “a liberalism that doesn’t offer hope to Ecuadorian peasant and Haitian sweatshop workers and Congolese children caught in cobalt mines as much as it does for Manhattan progressive families is hardly worth defending.”

If we must stay in our lanes and may only speak for ourselves, then we will never get along. What is this “less interesting” form of intersectionality if not tribalism? You can’t defeat tribalism with more tribalism. Sure, you might be able to defeat an opposing tribe, but what has your tribe become as a result? The left and right must intersect at a rejection of reductive identity politics.

Gopnik advocates for a return to humanist-informed liberal thought. He asserts that liberals must reject the binary-based identity politics that rule the day and be more nuanced and measured. And he’s quite right to assert that, “what matters is not who says it but the sanity of what’s said.”

Whether you’re right or left of centre, you need this book. Gopnik’s expertly rendered argument will engage you and provide you with a sense of relief. As long as we can communicate with each other, and there is promise of an “accommodation of contradictions,” then there is hope for our political and cultural future.