On September 2nd dozens of animal rights activists descended on a southern Alberta turkey farm calling for a “Liberation Lockdown” for the farmer’s turkeys. 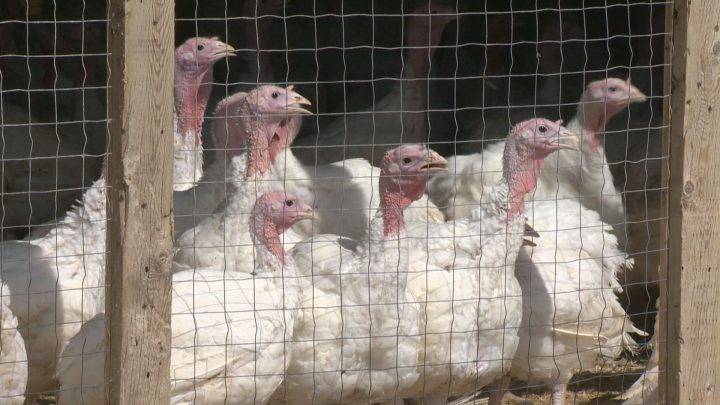 On September 2nd dozens of animal rights activists descended on a southern Alberta turkey farm calling for a “Liberation Lockdown” for the farmer’s turkeys.

The group who is reported to have ranged from 60 to 80 people went to the Jumbo Valley Hutterite turkey farm in the town of Nobleford near Fort McCloud. 30 of the activists went into the barns where turkeys schedule for slaughter were being kept.

“Around 4,000 individual birds are kept here in barns for 14 weeks, which due to extreme crowding means very poor air quality, pest infestations so severe entire barns are occasionally fumigated,” activist Trev Miller said in an emailed statement to CTV News.

Constable Ben Stubbe confirmed that RCMP officers were called to the scene on September 2nd to ensure the activist protestors and the farmers were kept apart.

Stubbe noted that the farmer at Jumbo Valley said he had nothing to hide and allowed activists to tour the barns under the supervision of police officers.

Tschetter said that the group along the tour demanded that they have the right to remove five turkeys from the premises, and refused to have any dialogue.

“We were totally surprised. The guy that works there thought ‘What’s going on?’ But they don’t talk to you, they don’t want to really talk,” Tschetter said. “If you’re scared about being bad to turkeys, well you are transferring disease from one environment to another walking into the barn.”

The activists for “Liberation Lockdown” did indeed take five turkeys from the farm, in full view  of police, and have transferred the animals to an animal sanctuary northeast of Calgary.

Alberta premier Jason Kenny weighed in on the situation saying that the events were unacceptable.

“Hardworking farmers and ranchers shouldn’t have to deal with harassment from illegal protesters,” Kenney said in a tweet, going on to say farms should not have to worry about trespassers interfering with their work or endangering the health of their animals.

The apparent harassment goes hand in hand with the harassment many farmers face online from vegan activists. Psychologists working in the agricultural sector say that this type of harassment has been taking a significant toll on farmers who already face many mental health challenges working in isolation.

Constable Stubbe said that the protesters were removed from the premises around noon and nobody was arrested despite the theft of five turkeys from one of the barns.

Stubbe added that the RCMP is still investigating the incident, although whether prosecution for the theft will take place is still unclear.