According to the owner, the vandals never entered the coffee shop but had a sprayer that misted much of the store, including Native American art and an authentic stuffed bison head mounted on the wall. 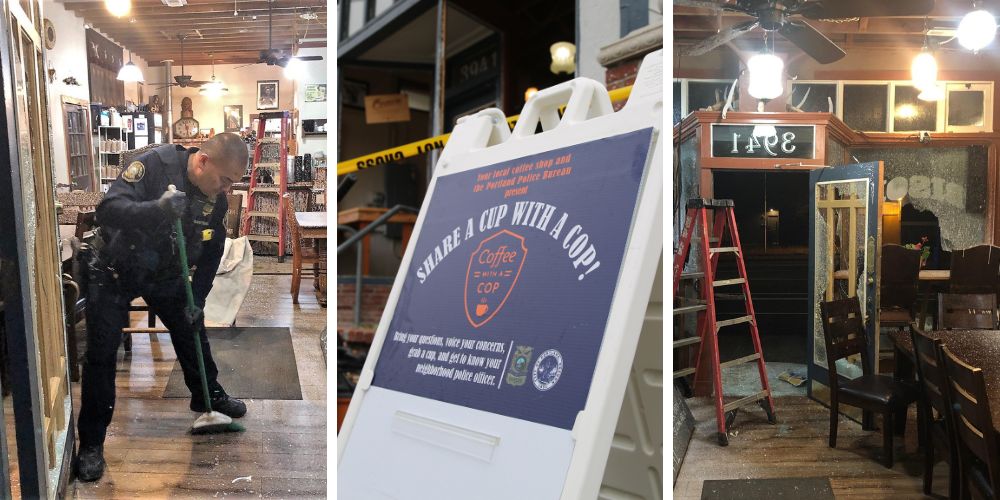 At approximately 3 am on Wednesday, six masked vandals smashed up the Bison Coffeehouse with hammers and crowbars and then sprayed paint and a fire extinguisher all over the establishment.

Neighbors contacted the owner Loretta Guzman immediately after the attack. She told Oregon Live that she arrived at the Cully neighborhood shop to find police cars parked outside and the shattered storefront’s glass windows still crackling.

“I’m just kind of numb right now,” she told the outlet. “It was planned. It wasn’t just random.”

Guzman had agreed to a request by police officials to host the two-hour event for the community. However, after the proprietor posted the event on social media using the hashtags “#positiveoutreach” and “#weliveforthefuture,” the page was spammed with angry posts.

She told Oregon Live, “I was just hoping people from the community could bring their concerns, their questions — because there’s a lot of questions right now that people have for the police.”

According to surveillance footage, the attack happened just hours after Guzman’s post. According to Guzman the vandals never entered the coffee shop but had a sprayer that misted much of the store, including Native American art and an authentic stuffed bison head mounted on the wall. Guzman is an enrolled member of the Shoshone-Bannock Tribes.

Police said that one of the vandals discharged a fire extinguisher which left white residue all over the shop’s interior. Guzman said the attack lasted only minutes but inflicted “thousands and thousands” of dollars in damage and she is raising money to cover the repairs.

Antifa social media accounts in Portland said the attack on the Indigenous-owned cafe was retaliation for them agreeing to host the "Coffee with a Cop" event. According to The Post Millennial's editor-at-large Andy Ngo, Antifa also justified the attack by claiming that the coffee shop's Instagram followed former President Donald Trump.

After Guzman swept up the glass, cleaned the white residue, and then spent the rest of the night cooking the shop’s pastries. The windows of the store were boarded up. Responding officers assisted with the cleanup.

Portland Police Bureau spokesperson Sgt. Kevin Allen said in a statement, “PPB has no plans to change our efforts to work closely with community members on the public safety concerns they have.”

“Having that community partnership is a critical part of the success of these events, so we’re grateful to Bison’s owner.”

According to the Portland Police Bureau, Wednesday morning’s event with the police officers went on as planned. Guzman told Oregon Live, “I’m hoping they’re (police) trying to make a change from all the stuff that happened over the years. You don’t have the answers, but maybe you can try to figure things out, to make things better. That was my thought — at least we can try.”

Portland Mayor Ted Wheeler condemned the vandalism in a tweet, writing that the vandals should be prosecuted to the “fullest extent of the law,” which could potentially include federal hate crime charges. Antifa accounts responded to the mayor's post claiming that windows cannot be "attacked" in order to justify the vandals targeting the Indigenous-owned coffee house.