While he was filming, someone inside the fence resorted to a well-known Antifa tactic that the activist group deploys during riots, using umbrellas to block members of the media. 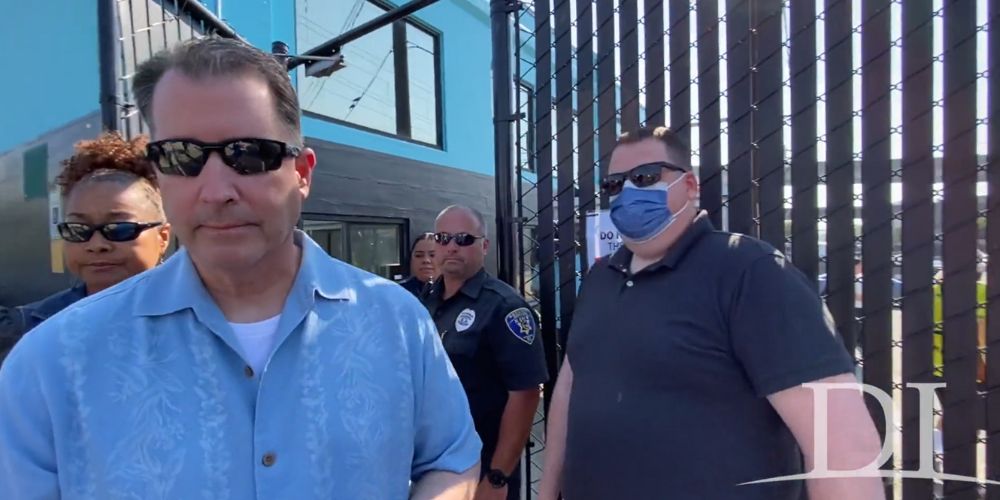 Ari Hoffman Seattle WA
Oct 4, 2022 minute read
ADVERTISEMENT
ADVERTISEMENT
An independent Asian-American journalist in Seattle was denied access to a media tour by staffers for King County’s Democratic leadership, of a proposed homeless facility that neighbors from the nearby Chinatown-International District claim will adversely affect their community.

Residents and business owners in Seattle’s Chinatown/International District are furious over a King County plan to create what is being called a “homeless megaplex” next to their neighborhood and claim they weren’t consulted about the decision.

Independent journalist and Discovery Institute fellow Jonathan Choe revealed the plan to the community through his reporting that the county plans to spend $66.5 million of taxpayer funds to construct a homeless shelter, tiny home village, and RV lot, that will house over 500 people and feature a sobering center and more.

In response to his reporting, over 1,000 people showed up last month to protest city officials and demand transparency. Protesters held signs that displayed city and county officials’ faces with captions that read, “not welcome here” “stop Asian hate” and “it’s racist.”

That was followed up by more protests and marches on Seattle City Hall and the King County Council.

The community is seeking a moratorium on the project until a safety plan for the community can be fully researched and implemented.

The Post Millennial asked King County Executive Dow Constantine’s office about how the community was informed about the project. In an email Chase Gallagher, Constantine’s Director of Communications said, “King County, City of Seattle, and KCRHA connected with more than a dozen community groups before the lease was transmitted to the King County Council. We conducted two community meetings after the lease was approved by Council and shared translated fact sheets on the project. SODO BIA hosted the first meeting and the CID Public Safety Council hosted the second meeting.”

However, according to Gallagher, the grand total of attendees at the meetings was “around 10 at the CID Public Safety Committee in July, and more than a dozen at the Safe and Clean Committee: SODO BIA meeting in April.”

After the community uproar surrounding the project including multiple protests, a media tour of the facility was held on Monday. However, Choe was excluded from attending the tour and Constantine’s office refused to accept Choe’s RSVP to the event.

In a video taken by Choe outside of the project, multiple officials worked together in a seemingly coordinated effort to bar Choe’s entrance to the tour.

Marta Coursey from the Salvation Army said, “You had to be on the invite list. 24 hours. You know the policy.” Someone can be heard saying in the background “It's open to members of the media.”

Choe replied, “I've contacted you multiple times Marta. You haven't returned any of my calls.”

Gallagher, who was standing next to Coursey while masked outdoors then interjects and said to Choe, “you don't need to make a scene about this.”

Choe responded, “You haven't even sent me an email.”

Choe has over two decades of experience in news behind the scenes and in front of the camera. He has worked for ABC, NBC, FOX, CBS, and Tribune. He was even an Adjunct Journalism Professor at Columbia College School of Journalism in Chicago, IL, after graduating from Boston University's College of Communications with a Bachelor of Science in Journalism and has won multiple awards including an Emmy, and has been nominated a dozen other times.

Choe asked Gallagher, “So I'm not being allowed to go into this tour?” to which Gallagher replied, “No, you are not.”

Choe then asked, “What is it going to take for me to be able to go into this media tour?”

Gallagher responded, “You would have to work for a media organization, which you do not. You work for an advocacy group.”

Choe works for Discovery Institute and reports for their media wing called fixhomelessness.org but Gallagher claimed “It's not a media wing.” He added that the tour was only for “broadcast journalists and independent journalists, they work for media groups.”

When Choe attempted to enter the fencing surrounding the facility he was barred by uniformed officers. Gallagher and other officials also moved to intercept him.

Choe objected and Gallagher continued to reply with statements such as “you're not a member of the media” “don’t be defensive about it” and “Don't make a scene about it.”

Gallagher then declined to answer Choe’s questions about the project and continued to tell Choe that he was “not a member of the media.” Gallagher also stated, “I've determined that you work for the group that you've said that you work for, which is not a media group.”

Choe was left to video what he could from outside the fencing along with members of the community. While he was filming, someone on the inside resorted to a well-known Antifa tactic that the activist group deploys during riots, using umbrellas to block members of the media.

The weather in Seattle on Monday was in the seventies with a cloudless sky suggesting that the umbrella may have been brought specifically to keep people who were not members of the media from seeing what was going on during the tour.

Additionally, despite the city’s reputation for rain, Seattlites rarely use umbrellas and joke that “you can spot a tourist if they have an umbrella” in the city.

Choe can be heard calling out the tactic on video. “Oh my gosh. Antifa is here with umbrellas.” After he adjusts his position the bearer of the umbrella also matched to block his new position to which Choe stated, “Wow. Dow Constantine's media handlers are putting umbrellas in my face now. Incredible.”

From the video, it appeared that the tour moved inside to be away from public viewing as several members of the community can be seen recording the tour and commenting on how they were denied access as well. One stated, “We're not allowed in, we're not allowed anywhere close. We have to stand outside.”

A group protesting the project can also be seen outside the fence.

The tactics are par-for-the-course for Constantine who last month fled from Choe during a press conference when the journalist began asking questions about the project and after insulting the reporter to his face and claimed Choe wasn't a journalist.

Constantine has been frequently criticized for the county buying properties to be converted into homeless shelters in affluent communities without informing the neighbors. Multiple hotels have been purchased this way across the county.

However, many of them remain vacant, causing reporters and the community to ask who the Homeless Megaplex is needed and why would the county put people in tiny homes and a parking lot when hotels and other facilities are available and ready to go.

Last month after the previous interaction with Constantine, Choe told the Ari Hoffman show on Talk Radio 570 KVI,” They have a very clear playbook. They want total control of the narrative.” Choe spoke of his time at KOMO News in Seattle and said in over two years working there, Constantine never responded to on-camera interview requests.”
ADVERTISEMENT
ADVERTISEMENT
Untitled_design_-_2022-10-04T005514.475