Neighbors are concerned that one of the providers being considered is Plymouth Housing. Plymouth has regularly advocated for defunding SPD and demonized the department in social media posts and on their website. 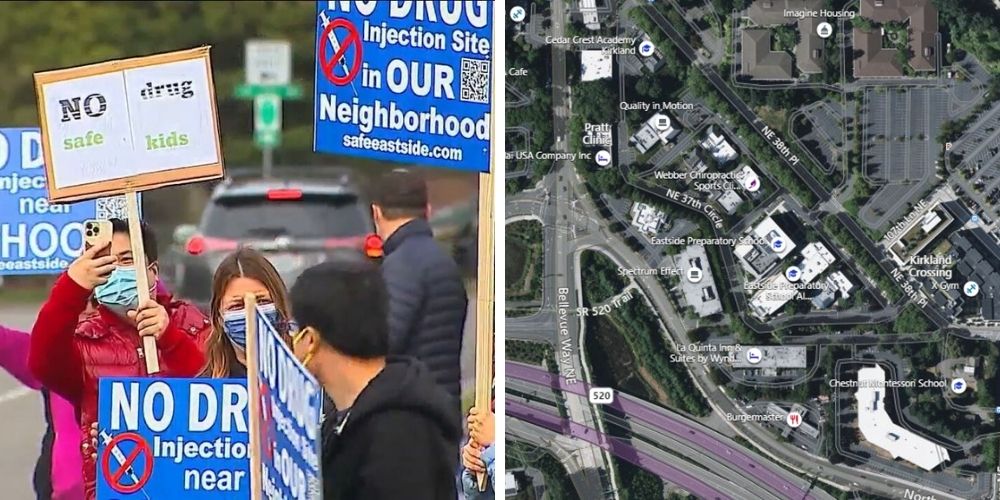 On Wednesday, neighbors rallied outside of the La Quinta Inn, in Kirkland, WA, to oppose the location from being converted into a homeless shelter. The hotel is across the street from multiple schools and daycares, as well as the business district.

The rally began at noon with participants calling for transparency, public input on the project, as well as officials to address questions and concerns of the neighbors. Some counter-protesters in favor of the project also demonstrated.

The Post Millennial was the first to report that the hotel was being purchased by King County for use as a homeless shelter without community input. This would be the latest in a series of multi-million dollar transactions to buy multiple hotels and motels in the county. More than half a dozen hotels have been purchased already and the county plans to use taxpayer dollars to buy a dozen more.

The La Quinta Inn site is located across the street from several schools and daycares and a short walk to others including; Chestnut Montessori School, Yarrow Bay KinderCare, and Cedar Crest Academy. Eastside Prep School, is only 30 feet away from the motel.

The area is also a major hub for businesses in the area, the owners of which are equally concerned about an uptick in retail theft.

In December, a violent homeless encampment located on school property was finally cleared after having been on the campus for over a year.

Following The Post Millenial expose on The La Quinta Inn site, King County Executive Dow Constantine issued a statement stressing that the deal was not yet finalized.

The converted hotels have typically been accompanied by an uptick in crime, open-air drug use, homeless activity, and vagrancy. King County officials refused to discuss vetting and background checks for residents of this new facility that will be located directly across the street from schools and daycares. Instead, they referred to a website for all their homeless hotels which said "Rules will vary by provider."

Many local providers operate "low barrier" facilities which means that residents in the shelters are not background checked and can bring in drugs and alcohol.

Neighbors are concerned that one of the providers being considered is Plymouth Housing. In November 2020, Kristin Benson, a full-time housing case manager, was stabbed to death by one of the residents of the organization. In a tragic, ironic twist, the murder happened while the Seattle City Council was slashing another 20 percent from the police department to partially redirect it for social workers to provide services to the homeless.

Plymouth has regularly advocated for defunding SPD and demonized the department in social media posts and on their website.

Many hotel owners have allegedly contacted the county and offered their properties as facilities, which are still struggling to fill rooms as tourists avoid Washington state due to the pandemic and onerous lockdown restrictions imposed by Democrat Governor Jay Inslee.

The Post Millennial learned that the announcement of the facility had been kept under wraps until the last possible minute, out of fear of pushback from neighbors.

Last summer residents of Bellevue and Redmond were irate about the purchase of a Silver Cloud hotel in nearby Redmond, also without community input.

The Inn at Queen Anne, which was also purchased by King County and converted into a homeless shelter, was accompanied by a massive spike in violent crime.

In February of 2020 at the beginning of the coronavirus pandemic, King County established a quarantine hotel in Kent for those living on the streets. The first patient homeless patient left the hotel and allegedly stole from a 7-Eleven across the street, then boarded a bus.

Two weeks later, Police said that homeless squatters were getting into unlocked rooms and vandalizing them before spending the night and leaving in the morning.

Not long after, the Red Lion Hotel in Renton was used to house over 200 people from Seattle’s Downtown Emergency Service Center (DESC) in April of 2020, nearby businesses began reporting spiking crime. In November of 2020, one of the residents housed at the hotel, who moved to Washington from Hawaii, allegedly set fire to his sixth-floor room.

Not long after, a 39-year-old man barricaded himself in his room and threatened to burn down the building.

Problems at the hotel became so bad that Red Lion covered their signage and the city worked to enforce zoning regulations on the facility.

More cities in the county have worked to alter their zoning to prevent these facilities from being established in their municipalities. In SeaTac, the city voted to restrict the county from opening any additional shelters within city limits.

Cities within the county have also said that the county has not coordinated with them before these facilities were established.