The King County Regional Homelessness Authority confirmed that they are investigating "serious allegations" and that housing voucher referrals for the group have been frozen. 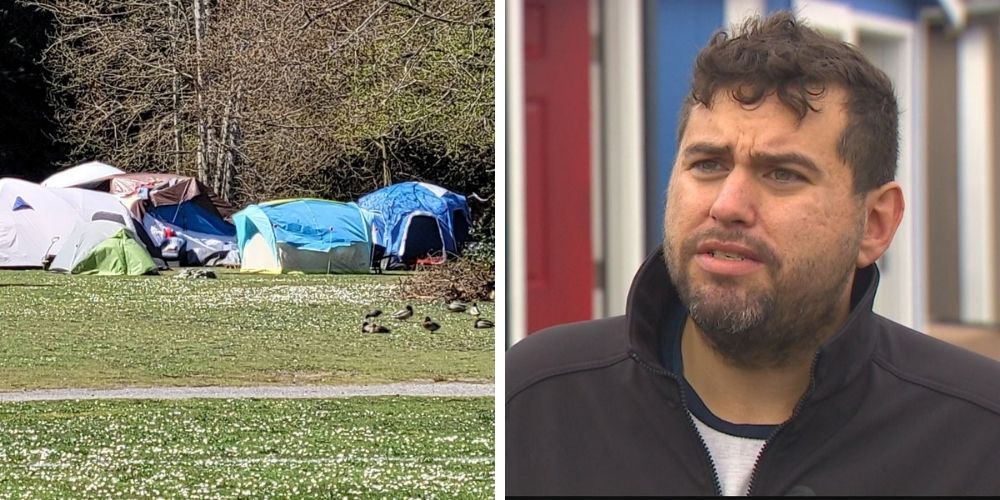 The former homeless meth addict who Seattle Public Schools appointed to remove a dangerous homeless encampment at Broadview-Thomson K-8 is accused of using meth with the campers and using their housing vouchers as leverage to get them to comply with his demands.

Mike Mathias, a formerly homeless meth addict who ran the self-created Anything Helps non-profit, stepped down from his role amid "…allegations of mistreatment towards people who had been living at the encampment."

The King County Regional Homelessness Authority confirmed that they are investigating "serious allegations" and that housing voucher referrals for the group have been frozen.

Though Seattle Public Schools and Mathias pledged last month to clear the encampment before the end of the year, both have missed multiple deadlines until now.

After demands from parents, teachers and neighbors to clear the encampment following crime, rodent infestation and more attribute to the campers, Seattle Public Schools contracted with Mathias of a new non-profit called Anything Helps.

According to documents obtained by The Post Millennial, Mathias is being accused of using funds from the non-profit to purchase meth for personal use. The documents citing multiple witnesses who claimed Mathias spent "large cash amounts" to purchase drugs for campers and himself. Additionally, "Despite multiple requests to produce receipts, Mr. Mathias cannot account for all Anything Helps funds. And that funds were unaccounted for."

The documents also state that Mathias was "…pressuring women at the camp to 'hit' or 'slam' him with meth."

One woman claimed that Mathias told her that her Emergency Housing Voucher would be rescinded/canceled and that he could get her evicted from her temporary housing if she did not agree to his requests.

The documents also claim that Mathias harassed the women to change their stories, "…disabling Anything Helps team email and application access, 'firing' unpaid staff after they came forward with the allegations, verbal abuse of and threats toward staff, and having staff banned from all sites."

He also allegedly made attempts to restrict access to shelter for the campers.

When he was appointed, Mathias told The Ari Hoffman Show on Talk Radio 570 KVI, that he would not be receiving any money for his efforts and that he turned down funding. However, that claim ran contrary to Seattle Public Schools, which told parents and neighbors that the district was giving $5,000 for Mathias to begin his work. Donations have also been coming into the fledgling organization.

Many asked why a new organization was needed when billions of dollars have been spent on Seattle’s existing homeless assistance organizations.

A June 2021 email obtained by The Post Millennial show that Seattle School Board introduced Matthias as a solution to removing the encampment after the suggestion came from one of the campers themselves. In an email to a neighbor Director Liza Rankin wrote, "...I was recently contacted by a member of the camp to meet with a volunteer coordinator with connections to housing opportunities and support for compassionate removal."

Rankin added that "Despite what you (or the Seattle Times Editorial Board) may think, the work to solve this issue has been constant and ongoing, and I am very grateful that we now have a Superintendent and Deputy committed to addressing it." However, at that time the encampment was still growing and violence was occurring regularly."

In it unclear if Rankin or the Seattle School Board did their research on Matthias before appointing him to the position.

A simple background check would have revealed that that Mathias has an extensive criminal past as well as addiction and mental health challenges.

In 2017, Mathias attacked a couple in a vehicle in a road rage incident. After berating the couple, and attacking their vehicle in the parking lot of a Target, they drove away, at which point Mathias followed them and at another intersection exited his vehicle and damaged the couple's car.

In 2018 Mathias was caught shoplifting from Target. At the time he admitted to the crimes and to having stolen from the location before. Retail theft is a regular crime committed by those in Seattle with mental health issues and those funding a drug habit.

At the time of his appointment, neighbors were skeptical and called him a "grifter," equating him to just a new face in the corrupt Seattle "homeless industrial complex.

In emails sent by neighbors and employees to The Post Millennial, Seattle School Board Chair Chandra Hampson and Director Zachary DeWolf demanded Mayor Jenny Durkan not allow the encampments to be removed from school grounds.

Local Marxist activists previously enabled the campers by giving them supplies and chasing off volunteer groups. Neighbors told The Post Millennial that Antifa activists have been spotted harassing outreach volunteers and have told the campers that the volunteer outreach groups, made up mostly of middle-aged residents, are dangerous.

After almost a year and a half, ongoing violence among the campers and multiple lockdowns at the school, the encampment on the Broadview Thomson K-8 campus has gotten smaller but new campers continue to show up.

On Tuesday, the city of Seattle posted notices to campers on the campus of the school to remove all belongings by Thursday, at which time the remainder of the encampment will be cleared.

Neighbors, parents and faculty are cautiously optimistic that the encampment will be removed Thursday, but fear that no mechanism will be put in place to keep campers away permanently.

Seattle Public Schools told The Ari Hoffman Show in an email "We are aware that allegations have been raised about Mike and we are assessing any necessary steps, but right now we are focused on the final phase of placement and clearing. Through our partnership with Anything Helps, the City of Seattle and King County, the process is still on track to be concluded with placement for all on Thursday."