Seattle School Board President Chandra Hampson threatened volunteers with trespassing who were distributing leaflets on Monday regarding a homeless encampment on campus and school officials’ refusal to address it. 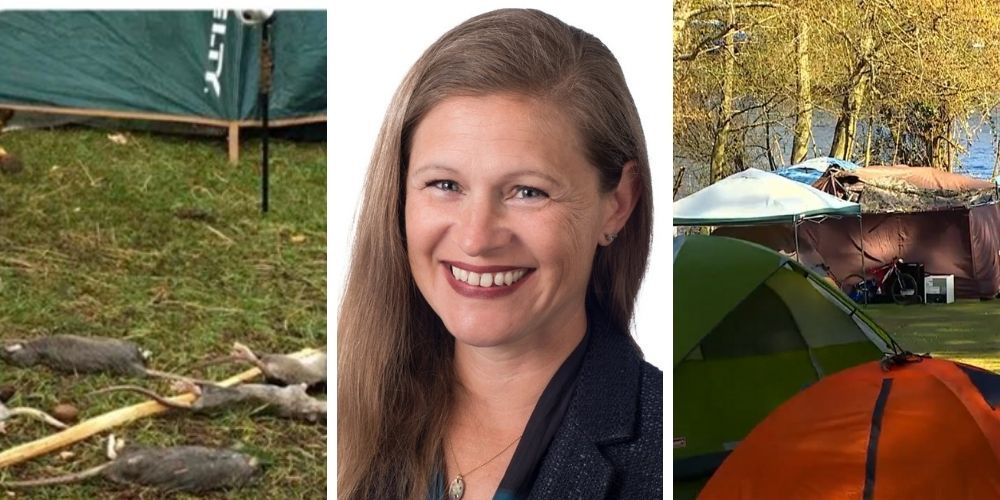 Seattle School Board President Chandra Hampson threatened volunteers with trespassing who were distributing leaflets on Monday regarding a homeless encampment on campus and school officials’ refusal to address it.

Students who returned to in person learning at Broadview Thomson K-8, on Greenwood Ave. on Monday for the first time in over a year found a homeless encampment with over 40 tents waiting for them on the campus. The encampment has been there since July and is one of two Seattle Public Schools that has reported encampments on the grounds.

City officials and school board members have declined to meet with the group of neighbors, parents and employees who are seeking to address the encampments. In emails sent by neighbors and employees to The Post Millennial, Hampson and Director Zachary DeWolf demanded Mayor Jenny Durkan not allow the encampments to be removed from school grounds.

"I want to state very clearly this is not an ask for a sweep! I do not believe in sweeps. People experiencing homelessness need housing and resources not traumatic sweeps of their livelihoods and belongings. I understand that the Council has allocated and assigned a lot of funding to support our neighbors experiencing homelessness. BUT we do need some support — we are bringing students back to classrooms and school buildings/campuses in a matter of a few weeks. Do you have any ideas for how to help?"

Hampson and DeWolf published a joint statement condemning any potential removal of encampments from school property or anywhere else in the city "We demand sweeps NEVER be performed on school grounds, adjacent or elsewhere in this City." Meanwhile, SPS superintendent Denise Juneau admitted in an email to neighbors obtained by The Post Millennial that "We realize people living unsheltered in encampments can create health and safety hazards for their occupants and the general public."

On Monday, a group of parents, employees and neighbors greeted students and their parents for their first day back and handed out flyers describing the situation with the encampments and inaction of school officials. According to the group, most of the parents had no idea there was an encampment on school property where children would be returning to classes and the playground.

The school locked a fence between the campers and the building due to drug use, used needles and the danger presented to students and families. King County vans have been spotted near the property giving out boxes of needles to addicts.  The locked gate prevented access for parents and caregivers dropping off their children including at least one elderly grandparent trying to get his grandchild to school. The school was also forced to hire security, after Seattle Public Schools ended their relationship with the Seattle Police Department last year in the wake of the death of George Floyd and demanded no officers on campus.

Neighbors told The Post Millennial that a woman died of an overdose at the encampment in February and that her body lay in the street for hours. They have also reported theft and ongoing drug issues in the community mostly populated by families and the elderly. Dead rats have been seen in the encampment tied to sticks. The encampment is also located on a protected environmental area next to a lake, which residents say is being polluted by the campers.

According to an email obtained by The Post Millennial, a representative of the group contacted the officials following the flyer distribution on Monday, asking for an update.

Hampson responded by threatening the group with trespassing, even as she demanded the campers remain on school grounds. "I hope you stayed on public sidewalks while handing out flyers? That wouldn’t be allowed on school grounds per policy 4200. To be clear Policies are the purview of the Board while anything with an SP is the purview of the Superintendent and their designees. 4200 and SP also give the right for a hearing for those officially trespassed."

The threat and emails were quite a departure for Hampson who in 2016 served on a committee that tried to remove homeless encampments from parks in her own affluent neighborhood of Magnuson Park, encampments only blocks away from her home.

The committee kept detailed logs of "hot spots" and crimes committed in the area. At the time the group was composing letters to former Seattle Mayor Ed Murray and advocated for campers to be cleared from the neighborhood park.

Yet Hampson continued to get into multiple arguments on social media with parents, neighbors and employees who were asking for the encampment's removal and even falsely claimed that the encampment was not on school grounds.

Broadview Thompson is one of two Seattle Public Schools that have so far reported encampments on campus. According to KOMO News, Meany Middle School’s custodian and safety and security specialist had “dangerous interactions” with campers who living just outside the building. One teacher claimed one of the campers pulled a knife on the custodian.

Principal Chanda Oatis told KOMO News that campers had broken into the school and taken electronics from a classroom. "I have heard messages from my families that it is a major concern and some of the families do not want to have their students return because of the encampment."