An Antifa member who threw an IED at law enforcement has been convicted of multiple felony arson and assault charges stemming from a violent Black Lives Matter-Antifa riot when a Portland police officer was almost set on fire. 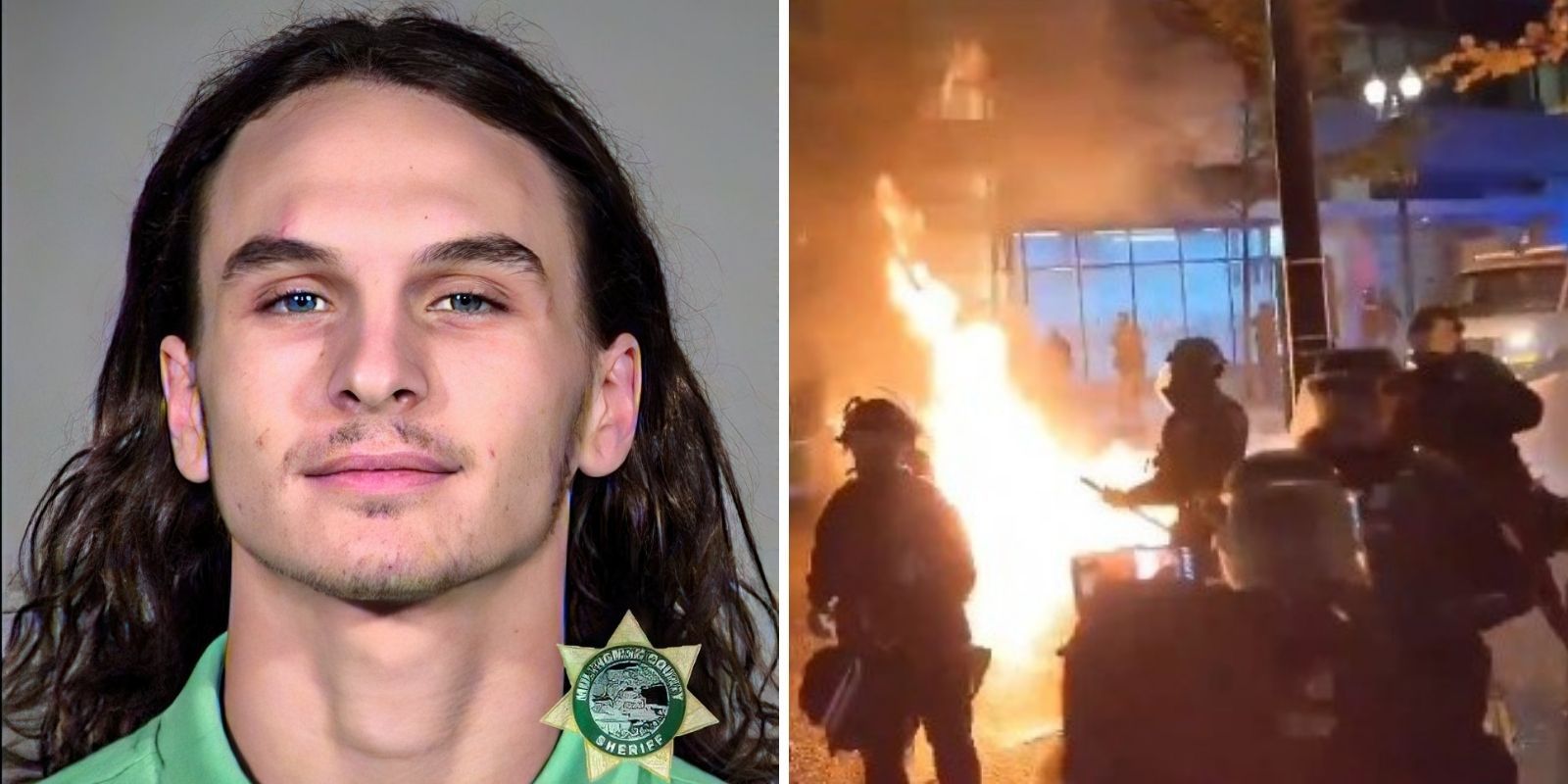 An Antifa member who threw an IED at law enforcement has been convicted of multiple felony arson and assault charges stemming from a violent Black Lives Matter-Antifa riot when a Portland police officer was almost set on fire.

Bass was sentenced to 48 months in prison after he pleaded guilty to the slew of charges prior to conviction and sentencing, the Multnomah County District Attorney's Office announced Monday via press release.

By pleading guilty, Bass admitted to unlawfully, knowingly, and intentionally damaging property valued over $1,000, damaging protected property by setting a fire, attempting to cause serious physical injury to another person by means of a dangerous weapon, possessing a destructive device, and engaging in tumultuous and violent conduct with more than five individuals.

Bass was indicted in December by a grand jury alongside fellow Portland rioter and co-defendant Hanna Karin Lilly, 21, for the pair's alleged roles at the September riot where Molotov cocktails were thrown. The direct action event was organized by Antifa militants in response to a Kentucky grand jury's decision to pursue a lesser charge in the police-involved death of Breonna Taylor in Louisville.

Hundreds of leftist rioters attacked the Justice Center, shattering the windows of the central police station with rocks and setting the exterior ablaze multiple times. A total of three Molotov cocktails were hurled at law enforcement, missing cops by inches. One explosion caused an officer's boot to catch on fire.

Bass's comrades are now raising money for him on GoFundMe to "Help Cyan Prepare for the Future." To date, the online fundraiser has almost raised enough to complete the $2,500 goal. Of the 15 individuals who contributed to the fund, Bass's accomplice Lilly is listed as the top donor who donated $500 to the campaign.

In the GoFundMe's description, Bass wrote that his attorney notified him of the prison sentence but expects 3 years behind bars with good behavior: "This is one of the hardest things I've ever faced, and I'll come out on the other side stronger..."

The fund's organizer Alice West wrote in the campaign's description that "Cyan could really use some financial help right now to ease his burdens."

"His life will be significantly improved," West wrote. "We can help give him the flexibility to work a little less in order to spend time with his mom and sisters, find quiet peace in the wilderness, get some skating in, and to carve out the space to try to find some inner balance. We keep us safe! Black Lives Still Matter!"

At the Antifa riot outside the Multnomah County Justice Center on Sept. 23, Bass threw a destructive device at police but the firebomb failed to explode. Bass was spotted dressed in black bloc and carrying a black backpack.

During the far-left riot, Bass used a wrist rocket slingshot to shoot projectiles and damage the police building's multiple windows and a flammable liquid to set fire to the Justice Center, which houses the Multnomah County Detention Center, Portland Police Bureau's headquarters, and the department's Central Precinct.

Bass was found in possession of white marbles in his pocket, a clear bottle with an unknown liquid, a black crowbar, a black slingshot, two lighters, and a black baseball cap. The detention center held 268 individuals at the time. On that date, the building housed 25 federal inmates held in custody on federal matters.

Bass was re-arrested last year when the case was re-instated before he was released on pretrial supervision. He was slapped with a separate federal felony arson charge for setting fire to the plywood and awnings on the Justice Center building following an investigation of the arson attack by the ATF. He pleaded not guilty.

"These violent actions endangered the lives and safety of those inside of the Justice Center and the officers present that night," said Senior Deputy District Attorney Nathan Vasquez via press statement when he requested that the court impose the agreed upon sentence. The prosecutor added: "These criminal actions do not reflect the values of this community and will not be tolerated."

The Portland Police Bureau, Portland Fire Bureau, Bureau of Alcohol, Tobacco, Firearms and Explosives, and the United States Attorney's Office for the District of Oregon assisted with the investigation and prosecution of Bass's case.

Prosecutors announced on Feb. 11 that Lilly pleaded guilty to one count of first-degree criminal mischief and one count of first-degree arson in connection with the riot last September. Lilly was ordered to perform 120 hours of community service and repay $46,000 in restitution after she admitted to aiding and abetting Bass. For the criminal mischief conviction, Lilly received a year-and-a-half of probation, KOIN-TV reported. Lilly is prohibited from "attending any demonstration that is declared an unlawful assembly or riot" while on probation, the district attorney's office wrote via press statement.

The resolution of the case took into account the defendant's culpability to the actual damage done to the Multnomah County Justice Center and Lilly's lack of criminal history prior to the incident, officials stated.