Texas Gov. Greg Abbott tweeted Monday night, "At Least 42 People Found Dead Inside Truck Carrying Migrants In Texas. These deaths are on Biden. They are a result of his deadly open border policies." 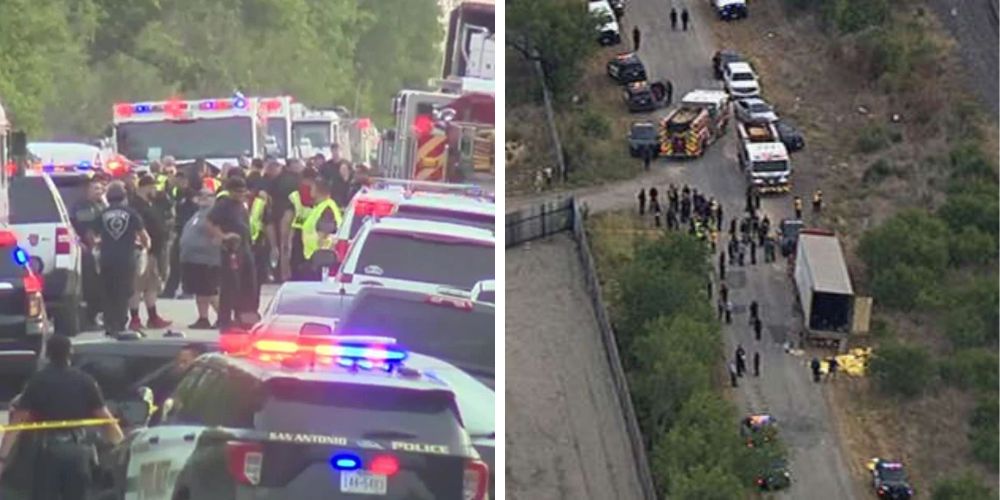 46 illegal immigrants were found dead in an abandoned 18-wheeler in San Antonio, Texas Monday night. Over a dozen were hospitalized after authorities located them.

According to Fox News, the tractor-trailer, with up to 100 migrants inside, was located at the 9600 block of Quintana Road, and is believed to be part of a human smuggling operation.

Local authorities confirmed 46 migrants, from Mexico and elsewhere, were found dead in the trailer, sixteen were transported to the hospital, including four children and 12 adults.

Survivors were suffering exhaustion, heat stroke and dehydration. The deceased victims showed evidence of heat-related causes of death. June 2022 been the warmest June on record in San Antonio with 16 days of temperatures 100 degrees or higher.

Chief William McManus of the San Antonio Police Department said a worker notified authorities about the tractor-trailer at approximately 6 pm. McManus said that the grisly discovery was now a federal investigation and at least three people were in custody, but did not specify if the individuals were suspects.

McManus added that the tractor-trailer was refrigerated, but that the refrigeration system was not functioning and no drinkable water was found inside the trailer.

An official with the San Antonio Fire Department said, "We’re not supposed to open up a truck and see stacks of bodies in there."

Texas Republican Rep. Tony Gonzales tweeted regarding the incident, "Today in San Antonio it was 102 degrees. Imagine being abandoned inside an 18-wheeler left to die - 42 people died today - will @AliMayorkas even mention their names?"

Texas Gov. Greg Abbott blamed President Joe Biden for the tragedy because of the ongoing border crisis caused by the administration’s policies. Abbott tweeted Monday night, "At Least 42 People Found Dead Inside Truck Carrying Migrants In Texas. These deaths are on Biden. They are a result of his deadly open border policies. They show the deadly consequences of his refusal to enforce the law."

The mayor added, "We hope those responsible for putting these people in such inhumane conditions are prosecuted to the fullest extent of the law."