The Atlantic's David Frum issued a tweet in which he claimed that one Covid prevention/punitive measure is to "Let hospitals quietly triage emergency care to serve the unvaccinated last." 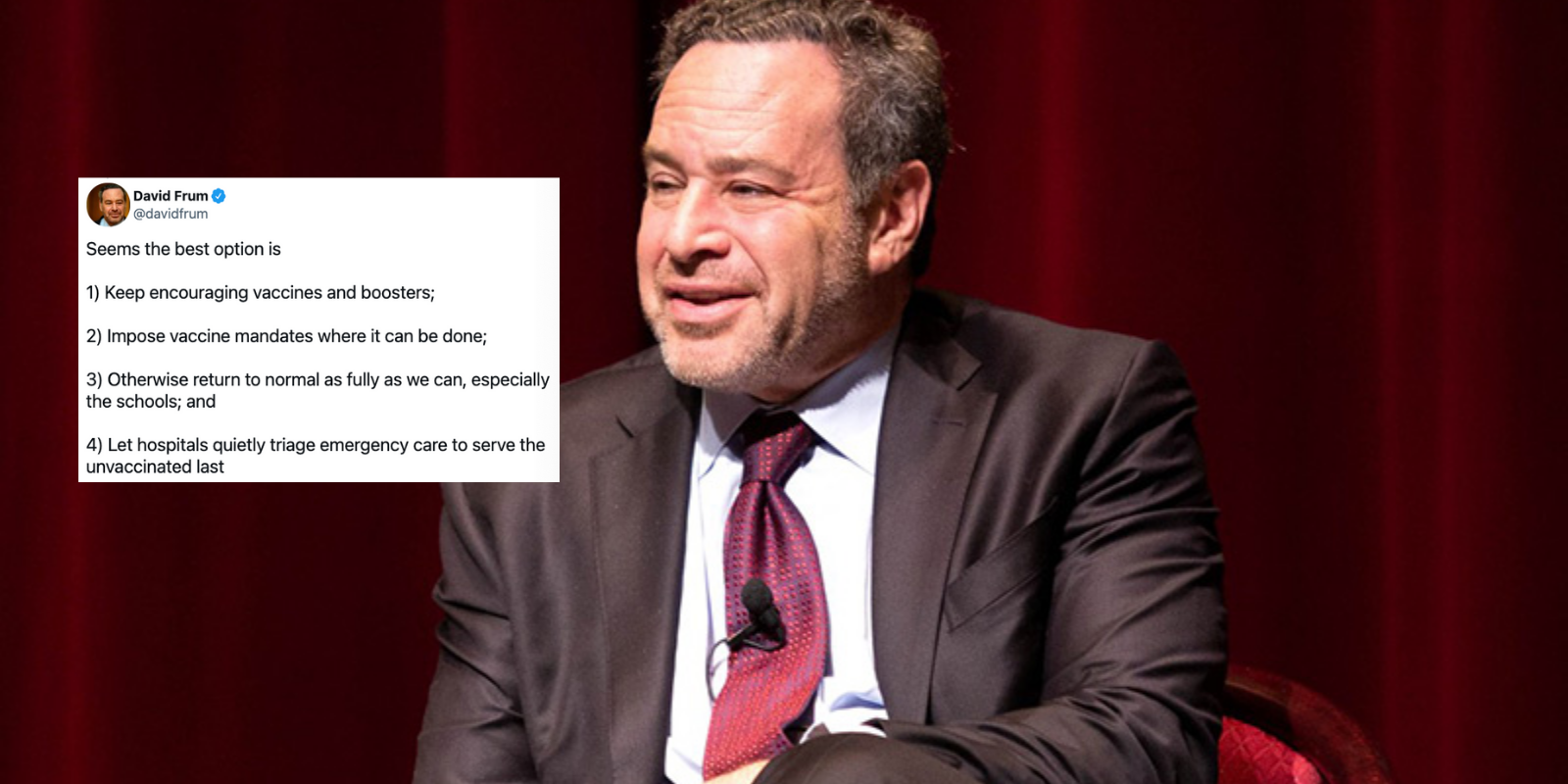 The Atlantic's David Frum issued a tweet in which he claimed that one Covid prevention/punitive measure is to "Let hospitals quietly triage emergency care to serve the unvaccinated last."

This tweet, which has since been widely circulated and mocked, albeit with horror, by many on the conservative side of the spectrum, contained a list of measures that Frum believes should be enacted. These, he believes, will curb a pandemic that has continued despite drastic restrictions implemented by many countries.

Frum's missive was intended to show ways that the US could begin to "open up," and lift some restrictions, but his method is to impose more, and to leave some of the most vulnerable among us without emergency care, as punishment for their not having been vaccinated.

Frum begins his list of suggestions with an ask for "vastly stricter vaccine mandates," but states that this "is plainly not going to happen."

He lays out two options for the US, "keep schools and businesses on the present hobbled footing indefinitely" or to "return fully to normally [sic] as booster become available to all, accepting the risks of 'normal' in a 30% unvaxxed society."

He slams the unvaccinated, and further slams media that states that people have a right to make their own medical choices, while having made their own choice to get vaccinated. "But the malignant minority is not yielding to reason any time soon," he writes, decrying the federal government for having not enacted further restrictions on personal liberties for those who are unvaccinated, such as travel restrictions.

Denying treatment to those who have forgone COVID-19 vaccinations has been a question for debate. In September, the American Medical Association said that "a physician should not refuse a patient simply because the individual is not vaccinated or declines to be vaccinated. The commitment to care for those who are sick or injured carries with it a duty to treat in other circumstances as well, including public health crises..."

The AMA further stated that a physician may not "ethically turn a patient away based solely on the individual's infectious disease status, or for any reason that would constitute discrimination against a class or category of patients."

"A patient’s vaccination status in and of itself is not sufficient reason, ethically, to turn that individual away," the AMA writes.

Many on Twitter slammed Frum's plan for hospitals to "quietly" enact this policy, which has the feel of shadowy authoritarianism and lacks any measure of transparency in health care, something that is already an issue in US medicine.

Mark Hemingway simply called out the use of the term "quietly," which would make even criticizing the policy difficult since no one would really know about it.

Harmeet Dhillon, an attorney specializing in civil liberties cases, noted that the whole thing was "gross."

Substack's PolitMath noted that the shift from "protection" to "punishment" had been thoroughly made. "It is interesting how much pandemic policy has morphed in the minds of some from 'protect people' to 'punish people,'" they wrote.

In response to critics who made themselves known on the thread, he took aim at those who are not vaccinated, saying that they "see themselves as bottomless victims, even as their own bad choices deny hospital care to so many others in desperate need."

"If, at this point," Frum wrote, "you are still unvaccinated, you are not a victim. You are a cause of the victimization of vulnerable others."

A dangerous madness has taken over otherwise reasonable thinking people as the pandemic continues. They have not only celebrated policies dictated by emergency orders to curb the rights of their fellow citizens, but have advocated for more restrictions and penalties for those who don't comply.

This is part of a broader mindset in which it is not enough to live as one chooses and allow others to do the same, but must forcefully require others in society to live according to your own dictates, under penalty of punishment.